EXPLAINER: With bankruptcy tossed, what's next for the NRA? 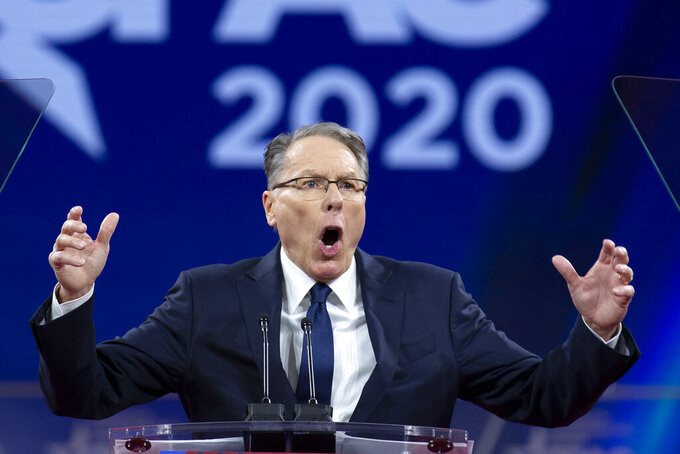 FILE - In this Feb. 29, 2020, file photo, National Rifle Association Executive Vice President and CEO Wayne LaPierre speaks at Conservative Political Action Conference, CPAC 2020, in Oxon Hill, Md. Federal Judge Harlin Hale announced his decision Tuesday, May 11, 2021, to dismiss the National Rifle Association's bankruptcy case over whether the powerful gun-rights group should be allowed to incorporate in Texas instead of New York, after 11 days of testimony and arguments. Lawyers for New York and the NRA's former advertising agency grilled the group's embattled top executive, LaPierre, who acknowledged putting the NRA into Chapter 11 bankruptcy without the knowledge or assent of most of its board and other top officers. (AP Photo/Jose Luis Magana, File)

NEW YORK (AP) — Now that a judge has rejected the National Rifle Association’s bankruptcy bid, blocking its plan to reincorporate in Texas, the gun rights group is back to fighting a lawsuit that threatens to put it out of business.

Harlin Hale, a federal bankruptcy judge in Dallas, dismissed the NRA's case Tuesday. He ruled the organization's leadership sought Chapter 11 protection in bad faith — without informing most of its 76-member board — and did so to gain an “unfair advantage” in its fight with New York regulators.

What does that mean for the NRA and America's long-running battle over guns? Here's a look at where things go from here.

“The rot runs deep, which is why we will now refocus on and continue our case in New York court," James said.

James sued the NRA in August 2020, alleging executives diverted tens of millions of dollars for lavish personal trips, no-show contracts for associates and other questionable expenditures. NRA chief Wayne LaPierre and three others who have worked for the organization were also sued.

The NRA countersued, alleging James — who once called the NRA a “terrorist organization” — was motivated by political hostility. That case is pending.

In filing for bankruptcy protection in January, the Virginia-headquartered NRA made clear it sought to escape regulatory oversight in New York, where it was chartered as a nonprofit in 1871. James has regulatory power over nonprofits incorporated in the state.

The NRA had sought to move litigation to a state where it thought it could get an "even shake,” board member Charles Cotton said at the time.

Aside from putting the NRA out of business, James also wants LaPierre and the other defendants removed from leadership and ordered to repay money they are accused of illegally spending, plus penalties.

“Clearly the NRA is in need of oversight and reform, if not dissolution,” James said Tuesday.

Washington, D.C., Attorney General Karl Racine is also suing the NRA’s foundation, seeking to have a court-appointed monitor supervise its finances. The organization is also embroiled in ongoing litigation with its former advertising agency.

An NRA lawyer said it filed for bankruptcy in part because it feared the lawsuits would result in “death by 1,000 cuts.”

James’ lawsuit highlights misspending and self-dealing claims involving LaPierre — from his wife's hair and makeup to a $17 million post-employment contract for himself.

“There are individuals and officers who are using the NRA as their personal piggy bank and they need to be held accountable,” James said Tuesday.

LaPierre, who's led day-to-day operations since 1991, is accused of spending millions on private travel and personal security, and accepting expensive gifts from vendors, including African safaris and use of a 107-foot (32-meter) yacht.

The lawsuit said LaPierre, 71, spent NRA money on travel consultants, luxury car services and private jet flights for himself and his family, including more than $500,000 on eight trips to the Bahamas.

LaPierre has defended himself, testifying last month that cruising the Bahamas on a yacht was a “security retreat” because he was facing threats after mass shootings.

He conceded not reporting the trips on conflict-of-interest forms, testifying: “It’s one of the mistakes I’ve made.”

Phillip Journey, an NRA board member skeptical of LaPierre's leadership, said testimony at the bankruptcy trial about the organization’s operations could be fresh ammunition for James’ lawsuit or a potential criminal inquiry.

“They were just waiting for all of these transcripts to be completed, all of these exhibits to be admitted," said Journey, a Kansas judge. “I figure they're going to go throw them in front of a grand jury and see what pops out.”

The NRA remains interested in moving to Texas and has powerful allies who'd be happy to see it set up shop there. But doing so through another bankruptcy attempt would be fraught with risk, and James says she has the authority to block efforts to abandon its New York incorporation.

Hale dismissed the NRA’s case without prejudice, meaning the organization can refile — but he warned a second bankruptcy petition would prompt him to take a hard look at the NRA's lawyers “unusual involvement” in the group's affairs.

The judge wrote that the lawyers' actions raised concerns the group couldn't fulfill its fiduciary duty, which might lead him to appoint a trustee. That would hand the organization's reins to an outside official selected by the Biden administration's Justice Department.

The NRA could still pursue other steps to incorporate in Texas, where it claims to have about 400,000 members. Texas Gov. Greg Abbott, a Republican, said on Twitter that he supports the move.

But neither Abbott's office, nor that of Texas Attorney General Ken Paxton, who's voiced support in past, responded to questions about the NRA's possible path to Texas.

Even as it filed for bankruptcy protection, the NRA claimed it was in “its strongest financial condition in years” — but the coronavirus pandemic and mounting legal costs have hurt.

The organization, which in January reported total assets of about $203 million, liabilities of about $153 million, and $31 million in bank loans, said in court papers it saw revenues drop about 7% because of the pandemic. To cut costs, it laid off dozens and canceled its national convention.

Gun-control groups have seized on its troubles and a recent spate of mass shootings as prime opportunity to advance new legislation.

Yet the NRA has promised to “continue to fight on all fronts.” Even with Democrats in control of Congress and the White House, gun-control legislation faces barriers.

“The fact that the NRA is a shadow of its former self doesn’t mean all of a sudden the nation’s gun-violence problem is going to solve itself,” said Adam Skaggs, chief counsel at the Giffords Law Center to Prevent Gun Violence. "But certainly, the days where the NRA could wield power and exert unprecedented influence in our legislatures and our political system, I think those days are numbered.”

In March, the House passed two bills requiring background checks on all firearms sales and transfers and allowing an expanded 10-day review for gun purchases. But the legislation faces a tough road ahead, with some Senate Republican support required for passage.

Meanwhile, Journey, who requested that a court-appointed examiner investigate LaPierre, worries what will become of the group's non-lobbying work. He’s particularly concerned dismantling the organization will mean the end of things like firearms safety programs.

“I think some organizations may be able to pick up some of the pieces," he said, “but most of it will simply go away.”