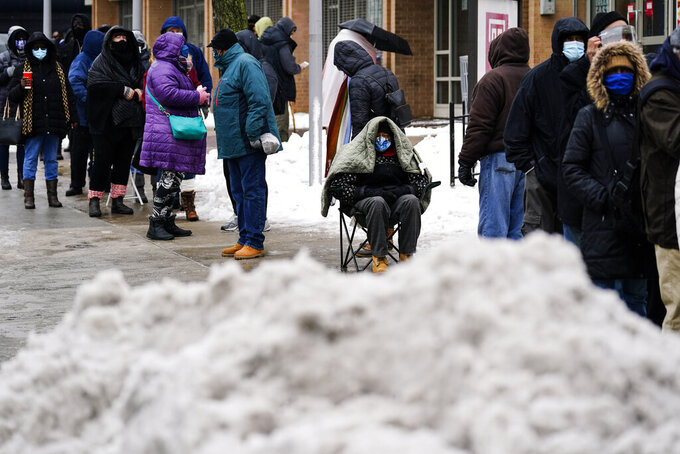 People wait in line for the opening of a 24-hour, walk-up COVID-19 vaccination clinic hosted by the Black Doctors COVID-19 Consortium at Temple University's Liacouras Center in Philadelphia, Friday, Feb. 19, 2021. Efforts to vaccinate Americans against COVID-19 have been stymied by a series of winter storms and outages in parts of the country not used to extreme cold weather, and hobbled transportation hubs and highways. (AP Photo/Matt Rourke, File)

NEW YORK (AP) — Efforts to vaccinate Americans against COVID-19 have been stymied by a series of winter storms and outages that have hobbled transportation hubs and highways in parts of the country not used to extreme cold weather.

That has created challenges for carriers such as UPS and FedEx, which have been on the front lines packaging and shipping the Moderna and Pfizer vaccines around the country. Both UPS's hub in Louisville, Kentucky, and FedEx's key hub in Memphis, Tennessee, have been affected. Meanwhile, several states have complained about vaccination delays and have had to cancel appointments.

The fact that 6 million doses have languished in airport hubs for several days during a once-in-a-century pandemic has raised questions about how the U.S. government and the nation’s largest shipping companies haven't been able — so far at least — to break the logjam.

White House officials say the snowstorms and power outages created a variety of challenges that slowed vaccination efforts in different ways. First, shippers like FedEx, UPS, and pharmaceutical distributor McKesson had to deal with workers who were snowed-in and couldn't package, ship the vaccine kits and do other jobs. Then, road closures in many states kept trucks from delivering the vaccines. Finally, more than 2,000 vaccination sites were in areas with power outages.

Still, the government is moving ahead with plans to open five new mass vaccination centers, one in Philadelphia, and four others in the Florida cities of Miami, Orlando, Tampa and Jacksonville.

HOW ARE CARRIERS TRYING TO FIX THE ISSUE?

FedEx says it's relying on other hubs around the country to fix the problem. That includes its shipping hub in Indianapolis — the company’s second largest after Memphis — and regional sorting hubs like the ones in Oakland, California, and Newark, N.J. FedEx says it's not warehousing any COVID-19 vaccines in the U.S. UPS has been less forthcoming, saying only that it has “extensive contingency plans" to keep goods moving when roadways are impassable or airports are closed because of severe weather. Kentucky Gov. Andy Beshear told CNN Friday morning that the UPS hub in Louisville is up and running again.

The bad weather hit just as the carriers were already under strain due to the surge in online shipping, says Michael Zimmerman, a partner in the strategic operations practice of global management consulting firm Kearney. While the rerouting can help, the carriers will still have to deal with a lot of backups at each stage of the process, from shipping to sorting.

WHAT IS THE VACCINES' NORMAL ROUTE FROM FACTORY TO CLINICS?

Pfizer has been shipping its vaccine doses for U.S. states directly from its factory outside Kalamazoo, Michigan, using its existing network of shipping companies, which includes UPS and FedEx. The two-dose vaccine requires ultracold storage, at minus 112 degrees Fahrenheit to minus 76 degrees Fahrenheit (minus 80 degrees Celsius to minus 60 degrees Celsius), which will keep it stable for up to six months.

Moderna is using a third party contract manufacturer for at least some of its vaccine production. Drug wholesaler McKesson, chosen by the federal government to distribute most COVID-19 vaccines, is handling shipments to hospitals and other medical providers. Some of those are going through transportation hubs in Louisville, Kentucky, and Memphis, both of which have had their operations slowed by this week’s winter storms.

Moderna’s vaccine is shipped frozen, at minus 13 degrees Fahrenheit to 5 degrees Fahrenheit (minus 25 to minus 15 degrees Celsius). The vaccine vials also can be thawed after delivery and kept unopened in a regular refrigerator for a month before use.

HAVE THE DELAYS CAUSED VACCINES TO SPOIL?

Not as far we know. The White House says it's working with shippers to make sure no vaccines are ruined during the weather delays.

A Pfizer spokesman said Wednesday that the company hasn’t had any of its vaccine spoiled due to weather-related shipment delays — but that was a couple of days ago. However, Pfizer ships its vaccine vials packed with dry ice in special thermal containers that can maintain the correct temperature for up to 30 days. On Friday, the company submitted data to the U.S. Food and Drug Administration indicating their vaccine is stable at temperatures a little below freezing for two weeks.

FedEx is delivering the Moderna vaccine, along with kits for administering it, for McKesson. FedEx uses Bluetooth sensor devices affixed to vaccine shipments to monitor their temperature and location to prevent problems, and has years of experience transporting vaccines and other medical products that require tight temperature control.

HOW HAVE THE DELAYS PLAYED OUT IN STATES?

A number of states including North Carolina, Tennessee and Washington have complained about the delays, citing cancellations in appointments. In Tennessee, the state’s health agency said distributors have been unable to pack and ship the COVID-19 vaccine this week due to the winter weather. According to a spokesperson, “many vaccine clinics” were closed again Friday and appointments were being rescheduled.

In Washington state, health officials estimated that more than 90% of this week’s allocation of vaccine doses would arrive late due to bad weather across the country, forcing the state to temporarily close two of its four mass vaccination sites and reschedule appointments there for next week. A third mass vaccination site was closing for the day, Saturday, because there weren't any vaccines.

HOW LONG WILL THE DELAYS LAST?

The White House says the backlog should be cleared next week — most of it in the next few days.

White House coronavirus response adviser Andy Slavitt said 1.4 million doses were already in transit as of Friday, and that UPS and FedEx will do Saturday deliveries.

How damaging this week's delays will have been is an open question.

Ernie Nichols, associate professor of supply chain management at the University of Memphis in Tennessee, says he doesn't see the interruption as a big problem once things thaw. However, Foster Finley, global co-leader of the transportation and infrastructure practice at AlixPartners, says catching up in a week might be difficult. _____