EXPLAINER: Italy faces a political crisis amid a pandemic 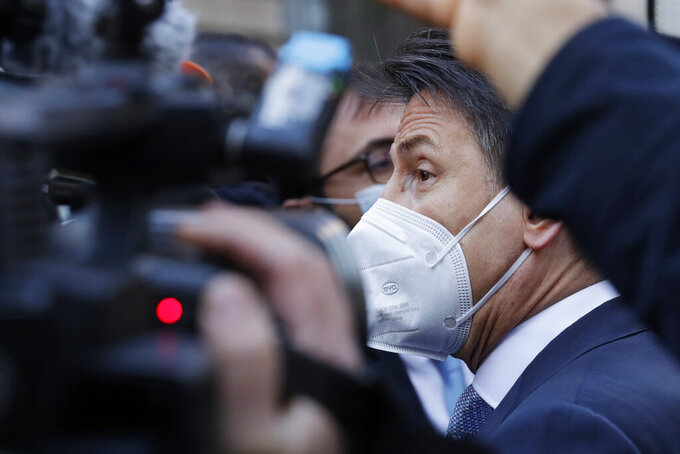 FILE - In this Jan 13, 2021 file photo, Italy's Prime Minister Giuseppe Conte is mobbed by reporters as he walks near Palazzo Chigi government headquarters, in Rome, Wednesday, Jan 13, 2021. Former premier Matteo Renzi is testing his already low popularity by provoking a political crisis that could bring down the government at yet another critical juncture in the fight against the pandemic. The outcome Renzi’s powerplay - orchestrating the resignations of two ministers from his tiny but key Italia Viva party - will play out this week, when Premier Giuseppe Conte addresses both houses of Parliament in a bid to win support and form what would be his third coalition government since elections in 2018. (AP Photo/Andrew Medichini)

MILAN (AP) — Former Italian Premier Matteo Renzi is testing his already low popularity by provoking a political crisis that could bring down Italy's coalition government at a critical juncture in the coronavirus pandemic.

Renzi orchestrated the resignations of two ministers from his tiny but key Italia Viva party. The outcome of his power play will become clearer this week, when Premier Giuseppe Conte addresses both houses of Parliament. If Conte makes a successful bid for support, he could remain in power, possibly heading would be his third coalition government since Italy's 2018 election.

This is not Renzi’s first foray as an iconoclast shaking up Italian politics. He became premier in 2014 by out-maneuvering and unceremoniously deposing then-fellow Democratic Party member Enrico Letta as Italy's leader. Renzi himself fell from power nearly three years later after gambling his popularity on a constitutional referendum that failed.

Now, the 46-year-old former Florence mayor might bring down Conte. He broadly accuses the premier of not properly managing the coronavirus crisis. Renzi says he is only following his conscience, at great political cost.

“Italia Viva did not start the crisis. It has been going on for months,’’ he asserted during a press conference last week.

Renzi, a senator for the Italia Viva party, supported Conte during an earlier, failed power grab by Matteo Salvini, the leader of the right-wing League party that was part of Conte's first government.

New polls show junior coalition partner Italia Viva has the support of just 2.4% of survey respondents, down from a high of 6.2% at the party’s inception. Italia Viva was created in September 2019 when Renzi bolted the Democratic Party he once ran. He brought with him two Cabinet members, giving himself the kind of leverage he employed last week.

With the resignation of the Italia Viva ministers, Conte is working to shore up support in parliament among independent lawmakers. He still has the backing of the Democratic Party and the 5-Star Movement, which have criticized Renzi’s move as irresponsible.

Conte will make his case in the lower house on Monday and to the Senate on Tuesday. A voice vote will take place after each appearance, tantamount to a vote of confidence.

If he fails to secure enough backing, Conte would likely submit his resignation to Italian President Sergio Mattarella. In that case, a technical government could be put in place. Analysts believe an early election is the least likely outcome, due to the difficulty of holding a political campaign and election during the pandemic. There are also concerns that the right-wing opposition would gain strength, and possible lead a new government. The current majority would like to hold on at least until January 2022, when a new president must be chosen.

Conte may survive to lead what would be his third government by cobbling together enough support in both houses. And it is still possible that Italia Viva will restore its backing.

Italy expects to have 222 billion euros ($268 billion) in European Union economic recovery funds to manage, money that is crucial to modernizing the country and its limping economy.

While Conte had wide support during Italy's devastating go-round with the coronavirus in the first half of 2020, cracks in his popularity have appeared during the even more deadly fall resurgence. Four months into the government's system of tiered restrictions, new confirmed daily infections remain stubbornly high, and Italy's pandemic death toll of 81,800 is the second-highest in Europe after Britain.

Conte's government also is under fire for not keeping high schools open during the pandemic, a decision mostly tied to inadequate transportation to allow for social distancing. And there are concerns that Italy does not have enough medical personnel to carry out the country's vaccination campaign.

But the crisis was ultimately spurred when Conte presented a plan that would have put himself in charge of managing the EU recovery funds. Political analyst Wolfgang Piccoli called it “the ultimate mistake,’’ setting up Renzi’s move to reassert his own “prominence.”

Italians are showing little patience for the political infighting when the nation’s priority is getting the coronavirus pandemic under control and rolling out the vaccines that many hope will end the nation's long coronavirus nightmare. In a new poll, 42% of Italians said they didn't understand what provoked the latest government divisions.