EXPLAINER: The Olympic soccer team that doesn't quite exist 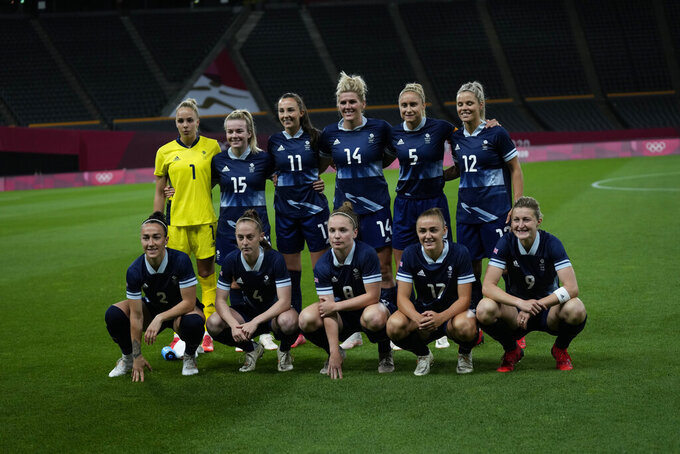 Britain's players pose for a team photo prior during a women's soccer match against Chile at the 2020 Summer Olympics, Wednesday, July 21, 2021, in Sapporo, Japan. (AP Photo/Silvia Izquierdo)

TOKYO (AP) — It was Caroline Weir’s hesitancy about a seemingly innocuous question that piqued curiosity about the British soccer team at the Olympics: Would she sing Britain’s national anthem “God Save the Queen” in Japan?

“Just for certain reasons,” she pondered, “it’s something I have to think about.”

Certain reasons — like the question of her nationality. The 26-year-old midfielder, a Scot, faced an awkward decision after agreeing to represent what is known as “Team GB” for the first time. Representing her country previously has only meant singing “Flower of Scotland” before kickoff.

The dilemma helps explain the challenges Britons face over their national identities — particularly for a proud Scot like Weir — and in forming unified sports teams.

If it wasn’t for the Olympics, Weir would never be playing soccer for Britain. Instead, as she did at the 2019 Women’s World Cup, she'd represent the saltire of Scotland — a nation with its own legal system and church.

Now consider this: “Team GB” did not technically even qualify for Olympic soccer. That place was earned by the England team. Even when an Olympics spot has been available to Britain, it has been sacrificed upon the altars of internal squabbling and the politics of world soccer.

Where did all this complexity come from? The intricate history of the British Empire, mainly.

WHAT IS BRITAIN, EXACTLY?

The fractious journey of Britain’s Olympic soccer team encapsulates the interlinking and colliding sense of belonging in modern Britain, where devolving power from the government in London to Scotland, Wales and Northern Ireland has separated national identities.

To truly understand the conflicted sense of national affiliation requires unpacking the construction of the country. Is it Britain or the United Kingdom?

The soccer players carried passports stating “The United Kingdom of Great Britain and Northern Ireland” to enter Japan for these Olympics. But Britain only incorporates England, Wales and Scotland. It’s why people in Northern Ireland can feel piqued and neglected by the use of “Team GB” as the country’s Olympic brand.

The construct of Great Britain stems from the 18th-century Act of Union, which united Scotland with England. The broader United Kingdom to incorporate all four of the home nations — initially with the entire island of Ireland — came with the unifying act of 1801.

But even a “Team UK” wouldn't cover all eligible athletes. The British Olympic Association’s jurisdiction covers not only the nearby Isle of Man and Channel Islands but also lands known as the British Overseas Territories, including the Falkland Islands in the southern Atlantic Ocean.

When soccer and rugby started to formalize more from the 1870s, there were no international opponents yet. So any games that would now be considered international fixtures saw Englishmen play against their Scottish counterparts in the two different codes of football.

It established the system in place today that established England and Scotland — as well as Northern Ireland and Wales — as separate entities in world sport.

At a soccer World Cup, there can be teams competing as England, Scotland, Wales and Northern Ireland (if they qualify, as they all did in 1958). But a Britain team? No go. To confuse matters more, in rugby, Ireland plays as a united team despite the partition of 1921.

In the Olympics' early years, Britain was represented in soccer by purely English amateur men in teams run by the English Football Association that won three golds in the early 1900s. The World Cup was first staged by FIFA in 1930.

How is this related to team GB? Because Scotland, Wales and Northern Ireland worried that if they joined it, they'd give up their individual identities — that their independence within FIFA as separate playing nations would be jeopardized.

Ultimately, having not qualified anyway since 1960, the English FA stopped entering after failing to reach the 1972 Olympics because it no longer ran an amateur team. When the qualification route for the Olympics changed, in 1992, Britain sacrificed its places when performances by England or Scotland met the threshold for a spot at the Games.

It was only London hosting the 2012 Olympics that brought the British soccer team back into existence. And for the first time, there would be a women’s team as well.

The path was not smooth. There was initial resistance by the federations of Northern Ireland, Scotland and Wales, which had been warned by FIFA they risked their independent status by participating in a British team.

"If this is the case, then why the hell do they have four associations and four votes and their own vice presidency?” FIFA's president at the time, Sepp Blatter, asked in 2008.

But in a public row that ran through the buildup to the 2012 Olympics, Blatter eventually offered assurances that the autonomy of the home nations would be protected and their status not eroded in the world game even if they let players compete.

While the men’s team of mostly players under the age of 23 due to Olympic regulations only saw English and Welsh selected, the women’s squad was all-English apart from three Scots. Both teams reached the quarterfinals.

While the unified British team was agreed as a one-off for 2012, there was a desire in England for it to return for the 2016 Rio de Janeiro Olympics. But some, particularly Scotland, found it difficult to trust Blatter’s assurances about their FIFA status. So despite the women qualifying by virtue of England’s semifinals appearance at the 2015 World Cup, the Olympic place was sacrificed.

After reaching another Women’s World Cup semifinals in 2019, England did not want to miss another Olympics that could help the women's game grow. And unlike at Rio, a combined team was given the clearance by the other home nations.

Last week, the Scotland women’s team did congratulate Kim Little for being appointed a co-captain of the British team, a duty shared with Steph Houghton of England and Sophie Ingle of Wales to reflect the combined contribution of three of the British nations. But @ScotlandNT made no reference to a British team featuring Little and Weir opening in Japan with a 2-0 win over Chile, nor the 1-0 victory over the host nation on Saturday.

“The fact there are Scots and Sophie Ingle in the squad,” Weir said, "hopefully that will unite the home nations and everyone can get behind us.”

Yet even if that happens, the soccer team that only exists sometimes still faces an uncertain future. Even if Britain wins gold at the Tokyo Games, there's no guarantee when — or even if — Team GB will play again.