EXPLAINER: Surfing, where the playing field is never level 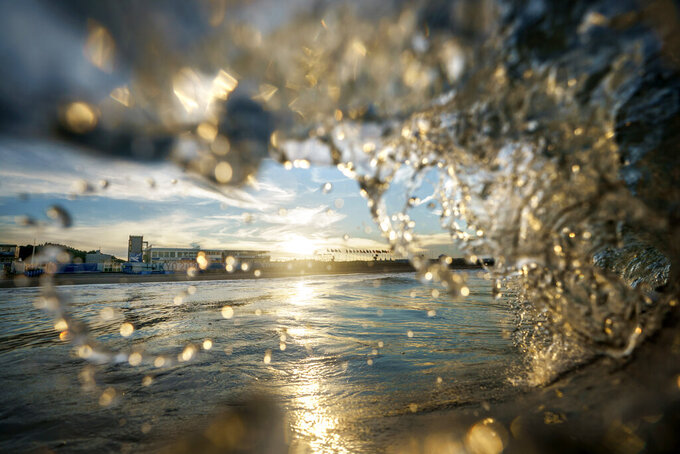 A wave breaks at Tsurigasaki beach as the venue for the surfing competition at the Tokyo 2020 Olympics stands in the background in Ichinomiya, Japan, Wednesday, July 21, 2021. (AP Photo/David Goldman)

TOKYO (AP) — Surfing is as much skill and science as instinct and timing. That begins with learning how to read ocean swells to anticipate the formation of the wave to quickly execute a maneuver.

Here, we explain what you need to know about surfing to appreciate its Olympic debut at the Tokyo Games this month.

Surfing has its own language, and the first thing you need to know about surfers is that they have a lot of popular phrases to convey their excitement and enthusiasm for a good ride.

Waves are created by the way the swells interact with the bottom contours of the ocean, called the break. Beach breaks — like the Olympic site at Tsurigasaki beach — happen because of sandbars, which can shift over time or due to storms. Point breaks are made against a point of land, such as a jetty. Reef breaks are often further out in the ocean.

The technical makeup of a wave is also important oceanography to know. The lip of the wave is the curling part at the top, the face of the wave is the blue water, and the whitewater is the foam that results from the energy of the breaking wave.

Think of it as a mental warmup that's necessary for successful surfing.

Hit the beach early in the morning and you’ll find swarms of surfers paddling out to the ocean, seemingly full of zen and sitting on their surfboards bobbing in the water. What they’re actually doing is concentrating to gauge the feel of the surf conditions.

Serious surfers also study up on the oceanography and atmospheric data before jumping in the water. Smart surfers become science junkies. They study the weather forecast, wave height, wind direction and tidal movement in obsessive detail.

“A lot of surfers will look at the satellite maps and look at the storms out on the ocean, which are going to create swells. And then there’s buoys that measure the height of the swell in the interval between the waves and there’s tides and there’s wind,” says Richard Schmidt, a retired pro surfer who now runs a surf school in his native Santa Cruz, California. “And in order to get really great surf, a lot of those elements have to all coincide and come together.”

Timing and positioning are everything when it comes to riding a wave. Competitive surfing in a nutshell is all about deciding which wave to take and what move or moves make the best use of what the ocean delivers in the moment.

“Doing any maneuver, you want to get a lot of speed and going into a turn, it’s laying it all on rail and pushing really hard but matching the power of the waves so that you don’t slide out,” says Carissa Moore, the reigning world champion and the woman to beat at surfing’s Olympic debut.

Whereas the men’s competition typically dazzles with explosive airs, the women’s game often features a more dance-like rhythm that showcases the speed, power and flow of the ride.

Most maneuvers are types of turns; where you look is where your body will go.

To do a barrel — where the surfer is riding inside the tube of the wave — it’s crucial to find the section of the water that is steep and hollow, then stay balanced within the height of the curl in order for the water to surround you. Surfers who disappear in the barrel and then exit smoothly at the end show control. Short surfers can rejoice in fitting in the tube without crouching or squatting down.

For an air, look for a soft crumble of the wave to gain speed against before launching towards the beach to harness the momentum of the wave.

“You have like a wave that’s never the same, so you’re constantly having to adjust to what you’re seeing and adapt to the situation,” Moore says.

Unlike other sports, competitive surfing is done on a literally uneven playing field: the mighty and uncontrollable ocean.

Each ocean wave and each beach are different, so the judging criteria depends on what the surf conditions are during the heat and how well the maneuvers are executed. The scoring is admittedly subjective and the conditions are unpredictable, which makes surfing a uniquely four-dimensional sport with the vagaries of the ocean as the X factor.

In competitive surfing, athletes take turns in timed heats riding their chosen waves based on their position in the surf zone during heats.

For the Olympics, a panel of five judges will then assign scores — up to a perfect 10 — for each wave a surfer rides during the heat, which can be 20 to 35 minutes. The highest and lowest scores are tossed out, leaving the middle three to be averaged as the ride score. Then, each surfer’s top two ride scores are combined to become their heat score, out of 20 total points. Scores do not carry over, so each heat is a new start.

Judges take into consideration difficulty, innovation, combinations, variety, and speed, power and flow, for an overall impression of each wave surfed. Where they perform in the wave is important; the most critical section lies where the blue water meets the white water.

There’s no hierarchy to the way maneuvers are scored. But if there were two identical moves, the bigger wave would prove to be more difficult to pull off.

“Someone could do a really crappy air in a little tiny water section — it’s like 2.5 (in score). And then someone could do like a really sick carve (turn) in a critical section — that’s like 6,” says Tory Gilkerson, who will be scoring as an Olympic judge. “There’s no ceiling or floor to each maneuver. It’s about how they’re executed and the technique and the quality of the maneuver.”