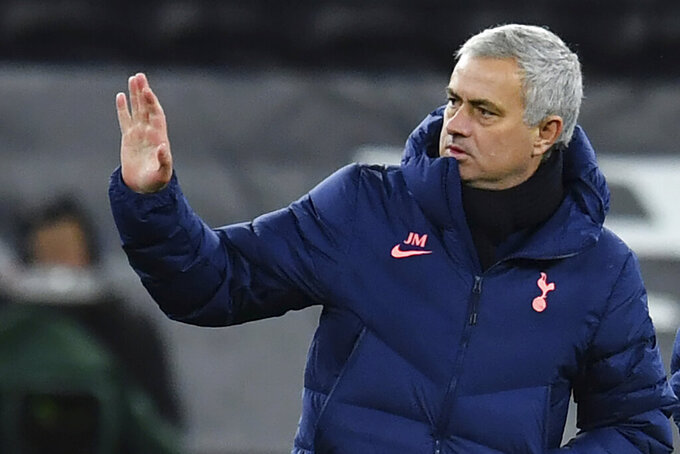 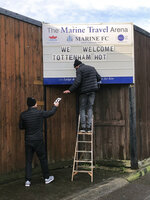 A bar transformed into a makeshift changing room.

One tiny stand with fewer than 400 seats.

And just a brick wall separating the gardens of overlooking houses from the dugouts on the narrow touchline.

The home of Marine’s team of part-timers in the eighth division of English football will be a world away from the luxuries Tottenham's millionaire players and manager Jose Mourinho are used to when they show up on Merseyside on Sunday for an FA Cup match.

“When I saw the draw come out,” Marine defender Josh Solomon-Davies says, “I did scream to myself.”

The northwest coastal town of Crosby will provide very humble surroundings for the biggest mismatch in the history of the FA Cup. With 161 spots separating Tottenham from Marine in the English football pyramid, never before has the gulf been so great between teams paired in the 150 years of world football’s oldest cup competition.

“We are an eighth-tier team playing against World Cup winners (Hugo Lloris) and Golden Boot winners (Harry Kane),” Marine striker Niall Cummins says. “You don’t get that anywhere else.”

While Tottenham’s players can earn hundreds of thousands of pounds (dollars) a week, there is a maximum weekly pay of 300 pounds (about $400) for Marine’s squad featuring semiprofessionals working by day in healthcare, garbage collection, car factories, and schools, like Cummins.

“Every kid has given me some stick. ‘Are you going to do this to this player, are you going to score, whose shirt are you going to ask for?’” the secondary school teacher says. “Then you’re thinking if you do something bad then you are going to be a GIF by the end of the week.”

The match will be broadcast live in Britain on the BBC’s main channel and in 40 territories worldwide. But with the latest pandemic lockdown preventing fans attending any sport in England, the Marine Travel Arena will be limited to only directors from both clubs and the media, alongside those playing, coaching and officiating.

The closest any fan can get to watching the game in person are any living in a house overlooking the pitch. And coronavirus restrictions prevent them letting in anyone from outside the household bubble for a peek.

While Premier League clubs enter only at this third-round stage, Marine began its cup run in the preliminary round in September and has already banked 120,541 pounds in prize money and broadcast fees. That is a significant windfall for a team that has funding for only 16 players, with another three going unpaid.

The sale of virtual tickets for the match has raised more than 11,000 pounds for Marine. Dan Cairney has been to every game this season but will have to settle with joining the millions watching on television.

“As long as (the score is) less than double figure we will probably be happy with that,” Cairney says while wandering outside the stadium this week.

Due to a tightening of coronavirus restrictions halting its league, Marine has not played in two weeks. Solomon-Davies has spent the time preparing for potentially defending against Harry Kane, Son Heung-min and Gareth Bale by watching clips on YouTube.

With experience playing for Saint Lucia’s national team and Tranmere, the 21-year-old Solomon-Davies regards this game as more than a novelty moment. It could be the platform for a transfer up the league pyramid.

“It’s a chance for me to see how I compare to those players and if I can compete with them,” he says. “It’ll be a good test. It’s a big chance for us to showcase our abilities.”

Marine has been receiving assistance from more illustrious teams about 20 minutes away on Merseyside, with Everton and Liverpool allowing them to use their training grounds.

Liverpool, the reigning Premier League champion and current leader managed by Jurgen Klopp, has even helped out with tactical preparation by sending recordings for match analysis.

“We haven’t got the scouting networks or the software to go back and look at games,” manager Young says.

Despite a congested fixture schedule and far more demanding opposition coming up, Tottenham will be showing Marine respect by fielding a strong side. Bale even requested to travel as he tries to regain match fitness after an injury halfway through his loan spell from Real Madrid.

So Tottenham, which reached the League Cup final on Tuesday, hasn’t been talking up victory in the biggest match in Marine’s 126-year history.

While Marine's manager also works for a train company, Mourinho has been working around Europe and winning trophies with Chelsea, Real Madrid, Inter Milan, Manchester United, and Porto.

“I clearly understand the dream,” Mourinho says. “Nobody puts a foot on the football pitch knowing or feeling that we are going to lose, so I believe that in this moment they feel like they are going to win and it’s up to us to bring them back to reality.”