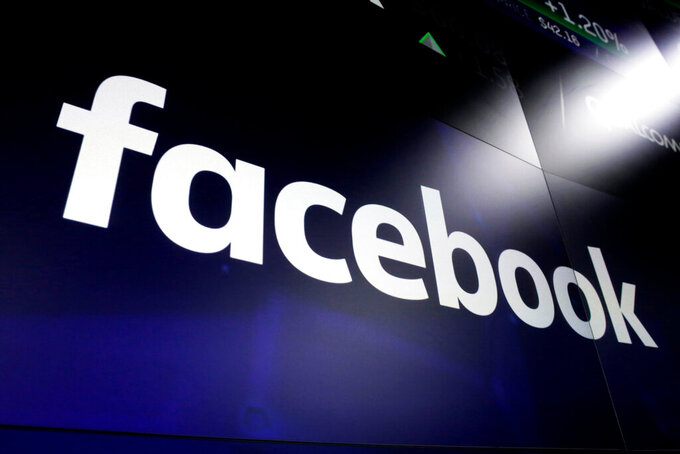 FILE - This March 29, 2018 file photo shows the Facebook logo on screens at the Nasdaq MarketSite, in New York's Times Square. Individuals linked to Russia and the French military used fake Facebook and Instagram accounts to wage a covert disinformation campaign in the Central African Republic ahead of elections there this month, Facebook announced this week. Facebook said on Thursday, Dec. 17, 2020 it took down hundreds of accounts and groups linked to France and Russia accused of “coordinated inauthentic behavior” in CAR as well as other countries in Africa and the Middle East. (AP Photo/Richard Drew, File)

PARIS (AP) — Individuals linked to Russia and the French military used fake Facebook and Instagram accounts to wage a covert disinformation campaign in the Central African Republic ahead of elections there this month, Facebook announced this week.

Facebook said it took down hundreds of accounts and groups linked to France and Russia accused of “coordinated inauthentic behavior” in the CAR as well as other countries in Africa and the Middle East.

Facebook’s move came ahead of elections Dec. 27 in the Central African Republic, which Facebook identified as the main target of the disinformation, at a time when both France and Russia have been jockeying for influence in the region.

The company said its investigators traced the French accounts to “individuals associated with French military.” However, Nathaniel Gleicher, Facebook’s head of security policy, said in a statement that “we did not see evidence that the French military itself directed the activity.”

Graphika, a New York City social media analysis firm that investigated the accounts with Facebook, said it found no evidence of direct institutional involvement by the French government or military.

The French military said in a statement Thursday to The Associated Press that it “firmly condemns” such disinformation efforts and is working alongside the U.N. and European partners to bring peace to the CAR.

“We are examining the results (of the Facebook-Graphika investigation), but at this stage, we’re not able to confirm any responsibility. There are many stakeholders in this struggle, public and civilian, which makes it difficult to assess the situation clearly,” the statement said.

France was once the colonial power in the Central African Republic and nearby countries that Facebook also identified as being targeted. Russian companies also have growing interests in the region.

Russian officials have not publicly commented.

Facebook said its investigation found links to individuals associated with Russia’s Internet Research Agency, a so-called troll farm accused of meddling in the 2016 U.S. election, and Russian businessman Yevgeny Prigozhin, who has ties to the Kremlin and has been indicted by the U.S. Justice Department. Prigozhin has repeatedly denied any connections to the troll farm and its activities.

The U.S. Treasury Department has sanctioned mining businesses and employees tied to Prigozhin in the Central African Republic and claims his business activities there are coordinated with the Russian government. In a statement published this week on Russian social networks in response to media queries, Prigozhin claimed that Facebook is a tool of U.S. intelligence agencies and “a group of oligarchs” serving to advance American interests around the world.

Facebook said it has taken down the network of accounts that tried to meddle in the Central African Republic, which were among almost 500 inauthentic Facebook and Instagram accounts, pages and groups that targeted users in several African and the Middle Eastern nations with posts about COVID-19, politics or the military.

“While we’ve seen influence operations target the same regions in the past, this was the first time our team found two campaigns — from France and Russia — actively engage with one another,” Facebook said in its report on the networks.

In the Central African Republic, the dueling French and Russian troll operations tried to counter one another with Facebook posts, and at some points tried to expose the other, according to a report by Graphika.

The French operation, meanwhile, strayed away from talking about upcoming elections in posts. It began as early as May 2018, focusing on the Central African Republic and security in Mali.

One Russian page that promoted Touadéra had 50,000 followers. Meanwhile, the largest following a French group amassed in the Central African Republic was 34 followers.

“Facebook’s takedown marks a rare exposure of rival operations from two different countries going head to head for influence over a third country,” Graphika said in a statement.