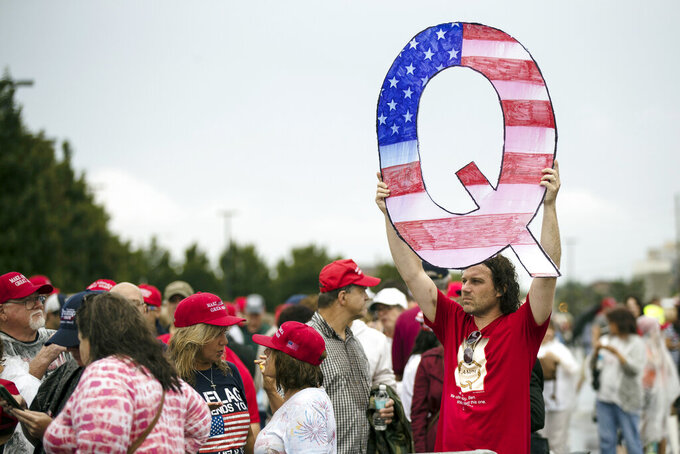 FILE - In this Aug. 2, 2018, file photo, a protesters holds a Q sign waits in line with others to enter a campaign rally with President Donald Trump in Wilkes-Barre, Pa. Facebook and Twitter promised to stop encouraging the growth of the baseless conspiracy theory QAnon, which fashions President Donald Trump as a secret warrior against a supposed child-trafficking ring run by celebrities and government officials. But the social media companies haven’t succeeded at even that limited goal, a review by The Associated Press found. (AP Photo/Matt Rourke, File)

CHICAGO (AP) — Facebook and Twitter promised to stop encouraging the growth of the baseless conspiracy theory QAnon, which fashions President Donald Trump as a secret warrior against a supposed child-trafficking ring run by celebrities and government officials, after it reached an audience of millions on their platforms this year.

But the social media companies still aren’t enforcing even the limited restrictions they’ve recently put in place to stem the tide of dangerous QAnon material, a review by The Associated Press found. Both platforms have vowed to stop “suggesting” QAnon material to users, a powerful way of introducing QAnon to new people.

But neither has actually succeeded at that.

On Wednesday, hours after a chaotic debate between Trump and Democratic presidential nominee Joe Biden, a video from a QAnon account that falsely claimed Biden wore a wire to cheat during the event was trending on Twitter, for example.

Twitter is even still running ads against QAnon material, in effect profiting off the type of tweets that its vowed to limit. And in some cases Facebook is still automatically directing users to follow public and secret QAnon pages or groups, the AP found.

“Their algorithm worked to radicalize people and really gave this conspiracy theory a megaphone with which to expand,” Sophie Bjork-James, an anthropologist at Vanderbilt University who studies QAnon, said of social platforms. “They are responsible for shutting down that megaphone. And time and time again they are proving unwilling.”

The QAnon phenomenon sprawls across a patchwork of secret Facebook groups, Twitter accounts and YouTube videos. QAnon has been linked to real-world violence such as criminal reports of kidnapping and dangerous claims that the coronavirus is a hoax. But the conspiracy theory has also seeped into mainstream politics. Several Republican running for Congress this year are QAnon-friendly.

Although restricted to the backwaters of the internet for years, QAnon posts reached millions of people via social media this year. Interactions -- primarily likes and comments -- with public Facebook and Instagram posts that included QAnon terms began climbing in March. By July, they received more attention than at any other point in the last year, according to an AP analysis of data from CrowdTangle, a Facebook-owned tool that helps track material on the platforms.

That month, public posts on Facebook-owned Instagram featuring the #QAnon hashtag received an average of 1.27 million likes and comments every week, according to the analysis. Some of those posts included news stories about QAnon. But the majority of the most popular Instagram posts during July were expressing support for the conspiracy theory, President Donald Trump, or far-right conservative causes, the AP found.

One post that used the QAnon hashtag, which raked up nearly 20,000 likes, claimed that “no one has died from coronavirus.” Another was a photo of a Donald Trump that called him “One of God’s Finest Warriors.”

Twitter didn’t limit the conspiracy theory until July 21, when it announced it was kicking off 7,000 QAnon accounts and promised to stop promoting or recommending QAnon. Facebook introduced its new rules on Aug. 18, pledging to stop encouraging users to join QAnon groups, banning QAnon hashtags and kicking off thousands of QAnon groups that encouraged violence.

“Unfortunately, it was too late and not enough,” Bjork-James said.

The AP also discovered more than a dozen popular QAnon accounts on Twitter that collectively maintain a following of nearly 1.5 million users, almost all of which were recommended to users who followed other QAnon accounts.

And Twitter appears to be profiting from those QAnon accounts. Nearly all of the accounts the AP identified had ads showing in their feeds for big brand names that sell everything from beer to toilet paper. That doesn’t mean the brands intentionally placed their ads in the feeds of the accounts, although it does suggest that Twitter isn’t preventing the ads from appearing next to QAnon material.

Twitter suspended just one of the accounts -- which had more than 250,000 followers -- after the AP inquired about it.

Many of those Twitter profiles featured QAnon terminology or imagery. Others were more subtle. One of the accounts is named after John F. Kennedy Jr. and promotes QAnon beliefs, including a theory that Kennedy Jr. isn’t dead and is staging a comeback to announce his support for Trump.

Twitter said it has not banned QAnon from its site entirely, but says it doesn’t make QAnon tweets or accounts visible in searches or recommendations. Views of QAnon tweets has dropped by 50 percent since its new rules took hold in July.

Facebook, meanwhile, hasn’t followed through on some of its promises and is still directing users to groups that promote it, the AP found.

As recently as Thursday, Facebook’s algorithm still directed to and even invited users to join QAnon groups. One page called “QAnon Updates,” where 11,000 users swap conspiracy theory videos and links, remained at the top of the site’s recommendations in one QAnon search. Facebook’s algorithm suggested a handful of QAnon groups, including one with “Trump 2Q2Q” in its name and another that used the term “cue” to hide from the crackdown. And a Sept. 2 automated email from Facebook recommended one user join a Facebook group whose cover photo featured a modified U.S. seal that said: “In QAnon We Trust.”

On Instagram, versions of the hashtag “WWG1WGA,” shorthand for the QAnon motto “Where we Go One, We Go All,” are still searchable and used hundreds of times daily.

In a statement, Facebook acknowledged that QAnon accounts have been skirting the platform’s new policies and said in a statement that its efforts require “ongoing vigilance.”

Facebook said it has been following the developments for QAnon followers, including a purported directive that they should drop references to “Q” or “QAnon” in order to avoid detection and bans by social media companies. But due to its sheer size and power, Facebook still appears to be the primary platform aiding QAnon’s spread into the mainstream.