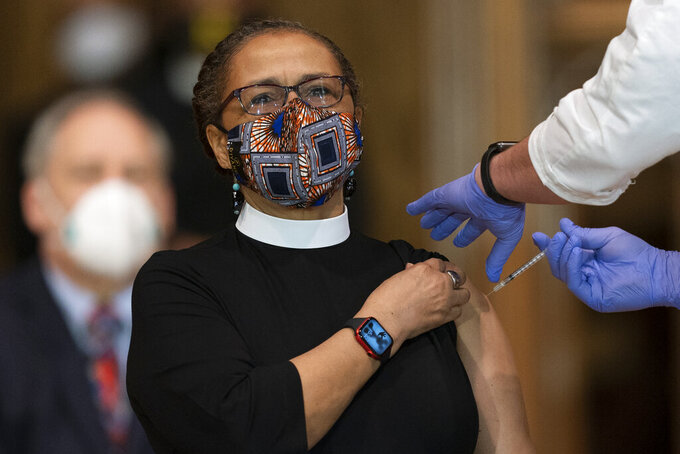 Rev. Patricia Hailes Fears, pastor of the Fellowship Baptist Church in Washington, is administered with the Johnson & Johnson COVID-19 vaccine during a gathering of a group of interfaith clergy members, community leaders and officials at the Washington National Cathedral, to encourage faith communities to get the COVID-19 vaccine, Tuesday, March 16, 2021, in Washington. (AP Photo/Manuel Balce Ceneta)

WASHINGTON (AP) — More than two dozen clergy members from the capital region rolled up their sleeves inside the Washington National Cathedral and got vaccinated against the coronavirus Tuesday in a camera-friendly event designed to encourage others to get their own COVID-19 shots.

The interfaith “vaccine confidence” event targeted in particular Black, Latino and other communities of color, with the aim of overcoming reluctance among populations disproportionately hit by a pandemic that has killed more than a half-million people in the country.

“Over 50% of all cases and almost half of all deaths are in persons of African American, Latino or Hispanic background, American Indian and Pacific Islanders," said Dr. Eliseo Pérez-Stable, director of the National Institute on Minority Health and Health Disparities.

“Now, much has been said about, ‘Well, the risk is greater because there’s more disease, more diabetes, more obesity, more heart disease,’" Pérez-Stable said. "But the reality is that the infections are more likely because people live in more crowded conditions. They work in jobs that do not allow the privilege of teleworking. They cannot self-isolate at home."

Following a moment of prayer for COVID-19 victims, the socially distanced attendees applauded when the Rev. Patricia Hailes Fears from Fellowship Baptist Church pulled back the upper arm of her Roman collar shirt and became the first one present to be inoculated.

A succession of faith leaders then took turns walking to tables to get jabbed by doctors in white coats at the cathedral, which has hosted national prayer services for the inauguration of several U.S. presidents as well as state funerals.

Melissa Rogers, executive director of the White House Office of Faith-Based and Neighborhood Partnerships, said working with faith communities is vital to the vaccination effort because many people are more comfortable getting their shot in a house of worship and religious leaders are among the most trusted leaders in their communities.

Dr. Anthony Fauci, the government's leading infectious-disease scientist and the public face of the nation’s fight against COVID-19, said that the vaccines have been extensively tested and are trustworthy. He also sought to debunk some myths and misperceptions around the vaccines, such as that they supposedly could alter a person's DNA or be a vehicle for implanting microchips for surveillance.

The vaccine campaign that has already reached tens of millions across the country has come “with no significant adverse events,” he added.

Fauci has estimated that somewhere between 70% and 85% of the U.S. population needs to get inoculated to stop the scourge in the country.

The coronavirus has killed Black and Hispanic Americans at disproportionate rates compared with their relative populations, according to the data from the Centers for Disease Control and Prevention.

In Washington, Black residents account for a little under half the population but nearly three-fourths of COVID-19 deaths. The District of Columbia has offered vaccinations to residents over 65, but numbers show that older Americans in neighborhoods with some of the highest concentrations of poor and Black people are lagging behind.

Officials blame in part historic distrust of the medical establishment, especially among Black older Americans who vividly recall medical exploitation horrors such as the Tuskegee syphilis medical study in which hundreds of impoverished rural Black men were allowed to suffer from syphilis with minimal treatment for decades.

Many Latinos face barriers in getting the shot due to factors such as lack of knowledge about the vaccines and government websites that don’t have Spanish-language instructions. Fear of deportation can also be a deterring factor for those in the country without permission.

“Unfortunately many who could most benefit because they are at highest risk of serious and even life-threatening infections are still holding back, worried about stories they hear, skeptical, unimpressed by how government has previously shown interest in their medical care," said Dr. Francis Collins, director of the National Institutes of Health.

“The church can play a leading role by educating, modeling and encouraging that there is nothing to fear here and there’s much to be gained,” Collins said. "That's what we are here to do today. Houses of worship are houses of hope.”