Family affair: Jimmy Boeheim to play for his dad at Syracuse 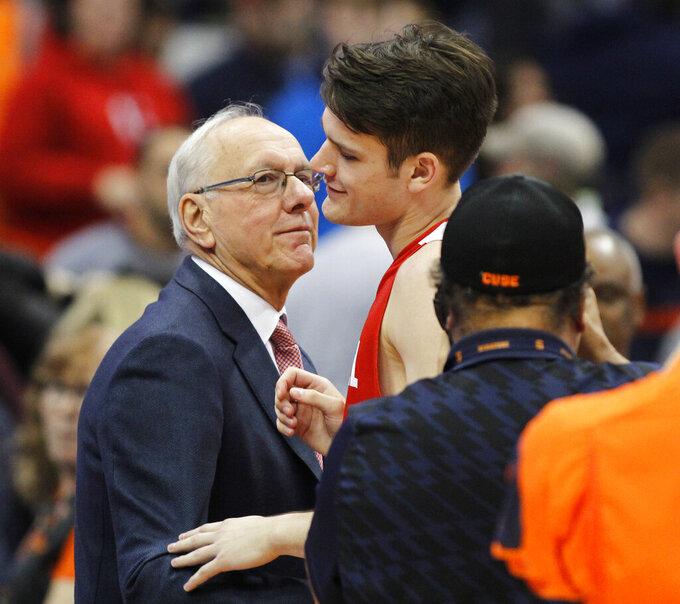 FILE - Syracuse head coach Jim Boeheim, left, congratulates his son, Cornell's Jimmy Boeheim, right, at the end of an NCAA college basketball game in Syracuse, N.Y., in this Friday, Nov. 10, 2017, file photo. Jimmy Boeheim is transferring to Syracuse to play for his father and with his younger brother after three seasons at Cornell. Coach Jim Boeheim's oldest son made the announcement Friday, April 16, 2021, on Instagram. (AP Photo/Nick Lisi, File)

Poised to graduate from Cornell in May and with one year of college eligibility left, Jim Boeheim's oldest son announced Friday on social media that he's transferring to Syracuse. He will play as a graduate student for his father and alongside his younger brother Buddy after three seasons with the Big Red.

“It's definitely a relief. I just want to hoop,” Jimmy said on a Zoom call as he recalled telling his parents of his recent decision. “He (his dad) tried to contain it a little bit, but you could easily tell how excited he was. My mom's in the background, screaming, crying. It was just really special.

"It's really a surreal feeling, hard to even explain. I never saw this coming.”

The announcement on Instagram was all of 14 words. “Back home to the place that made me fall in love with the game,” he wrote.

Jimmy Boeheim placed his name in the NCAA transfer portal in November after the Ivy League announced that it was canceling its basketball season. The 6-foot-8 Boeheim averaged a team-high 16.7 points and 5.6 rebounds in 21 games in his junior season in 2019-20.

“He’s a good player and we’re happy to get him,” coach Boeheim said. “Out of high school he was 6-7 and 200 pounds. He wasn’t physical enough to play at Syracuse. Cornell was a great place for him and now he’s 6-8, 225 and is more than strong enough to play here. We’re getting an experienced player that understands the game, can play inside and outside. Really happy to have him here.”

The Ivies don’t allow athletes to play after graduating, even if they have a year of eligibility left, but made a one-year exception because of the coronavirus pandemic. Jimmy Boeheim could have finished his career at Cornell but also was free to go to another school after he graduates, and in the end the Orange roster needed an experienced forward. He fits in just right.

“We're happy,” Jim Boeheim said. “It's a privilege to be able to coach your sons. The drawback in the beginning was I wanted him to be able to play. Buddy was able to play a little bit quicker because of his position and he was more physical at his position. Jimmy needed time. He really could have played here last year as a junior, but he liked Cornell. He wanted to finish there with his group of guys. Unfortunately, they couldn't do that. He'll be ready when he gets here."

Coach Boeheim said Jimmy would not have made the move if Marek Dolezaj had decided to come back for a fifth year. Dolezaj announced just over a week ago that he would pursue a professional career.

“They're basically the same type player,” Jim Boeheim said. “He (Jimmy) wanted to make sure there was a place. We had a lot of forwards and now we don't. We need that depth at forward."

Coach Boeheim said he had not heard from swingman Alan Griffin but does not expect him to return. Also gone are forward Robert Braswell, who entered the transfer portal, and forward Quincy Guerrier has plans to test the NBA waters.

Leaving the Big Red is bittersweet. Cornell was the first college to extend Jimmy Boeheim an offer to play and then helped mold him into the player he's become.

“I have to thank Cornell and coach (Brian) Earl, the whole staff,” Jimmy said. “I'm not here without Cornell. I know that. Just giving me an opportunity and playing me through so many mistakes. My freshman year was a train wreck, more or less. Coach and the staff continued to believe in me.”

Jimmy Boeheim said he was contacted by 15 to 20 schools, among them Oregon State, Arkansas, Georgia Tech, and Notre Dame, but none could offer what Syracuse has.

“It means a lot playing with Buddy, playing for my dad, playing for the hometown. I love Syracuse,” Jimmy said. “All that's really special. Buddy always knew he wanted to come to Syracuse. That was his dream. For me, I dreamt of getting an Ivy League degree and playing in the Ivy League.

“Nonetheless, it's a dream come true. It's always been in the back of my mind from my childhood, growing up in the (Carrier) Dome. Syracuse made me fall in love with the game.”