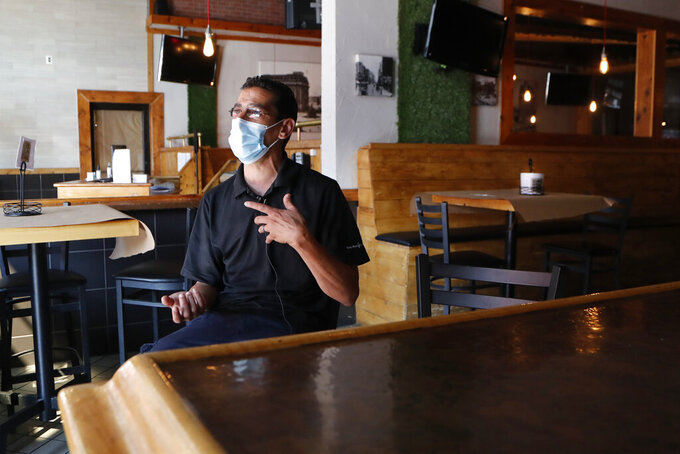 Mohamed Elmardi, manager of Brass Rail Pizza Bar, is interviewed Friday, July 10, 2020, in Detroit. The restaurant is close enough to hear the roar of the crowd at Comerica Park, when fans are allowed past the gates, and that makes it a convenient choice for people to get a slice and a sip before and after the Tigers, Lions, Red Wings and Pistons play, as they all play in close proximity. "That's something huge for us," Elmardi acknowledged. "If it's not going on, our business is down." (AP Photo/Carlos Osorio)

DETROIT (AP) — Brass Rail Pizza Bar is close enough to Comerica Park to hear the roar of the crowd when the Detroit Tigers play.

The proximity to the home of the Tigers, Lions, Red Wings and Pistons makes the establishment a convenient choice for people to get a slice and a sip on game days.

“That’s something huge for us,” said Mohamed Elmardi, the manager. “If it’s not going on, our business is down.”

The Tigers will be on the field for real games soon enough and the first home game comes Monday night against Kansas City. But there will be no fans as baseball and every other sport try to push ahead through the coronavirus pandemic.

“Tigers fans that may have season tickets and might come down for a 1:15 game on a Wednesday, they’re not coming because they don’t have a reason to,” said Kenny Valentino, assistant manager at Delmar Detroit, a rooftop bar and restaurant a short walk from the stadiums.

A dozen years ago, a recession and the collapse of the U.S. auto industry hit Detroit hard. The past decade has seen the city claw back, with downtown and some urban neighborhoods attracting thousands of young professionals.

When Detroit’s baseball team moved from decaying Tiger Stadium to newly built Comerica Park in 2000 and the Lions left the Pontiac Silverdome to play downtown two years later, it played a part in the city’s comeback. The Red Wings built Little Caesars Arena nearby nearly three years ago. They convinced the Pistons to leave the suburbs to join them and development followed.

Downtown Detroit is now a sports fanatic's dream: The Lions roam next door to the Tigers at Ford Field while the Red Wings and Pistons are across Woodward Avenue at Little Caesars Arena.

With professional teams from four major leagues playing within a half-mile of each other, there's no other downtown in the United States that clusters stadiums so close together.

That means the pandemic hit a little harder here. Streets of the Motor City often feel desolate amid pandemic-related restrictions on sports and concerts and with many people working from home. Some businesses near Comerica Park, Ford Field and Little Caesars Arena simply have not reopened since March.

Bars and restaurants in the area, though, are desperately hoping people come watch games on TV with social distancing guidelines in place.

“The real fans will still want to come out and be around other fans and not just watch the games at home,” Valentino said.

Tonon has an upbeat view of the look and feel around the stadiums these days.

“If you look left and you look right, Detroiters feel like they got their downtown back," Tonon said. “That's our foundation and we have to build off that foundation. Eventually, the sports teams are going to come back. A lot of the businesses have pivoted whether they're going online or opening their patios.

“With all these things happening, we've created unity in Detroit."

In recent years, something else unites Detroit sports fan: The Lions, Tigers, Red Wings and Pistons have generally underperformed and some of the teams were struggling to draw fans.

The Lions, who have a lone playoff victory since winning the 1957 NFL title, are coming off their worst season in a decade and yet the state's most popular team still regularly packs fans into Ford Field.

The Tigers dropped 114 games last season and have averaged 103-plus losses over the last three seasons. The Pistons have not been good enough to challenge anyone in the rare years they make the playoffs but not bad enough to get a No. 1 pick. And the storied Red Wings won an NHL-low 17 games last season and were handed another setback during the draft lottery, falling to the No. 4 pick.

Detroit pro teams weren't always this bad. The Red Wings won four Stanley Cups from 1997 to 2008 during a run of appearing in 25 straight postseasons. The "Bad Boys' Pistons won consecutive NBA championships in 1989 and 1990, and the team won it all again in 2004.

The Lions went to the playoffs six times in a nine-year stretch just before the turn of the century and made it to three postseasons from the 2011 to 2016 seasons.

Few fans expect a title from a Detroit team any time soon but at least they know baseball is back to provide at a diversion and perhaps a dash of hope.

“Somehow or another, hopefully, baseball at least puts a smile on their face while we’re playing here," Tigers manager Ron Gardenhire said. “And maybe, hopefully, sometime during this summer, they’ll start opening up where our fans can get back in and some of the businesses are able to open up."