Far-right lawmaker takes over Oregon GOP in larger US shift 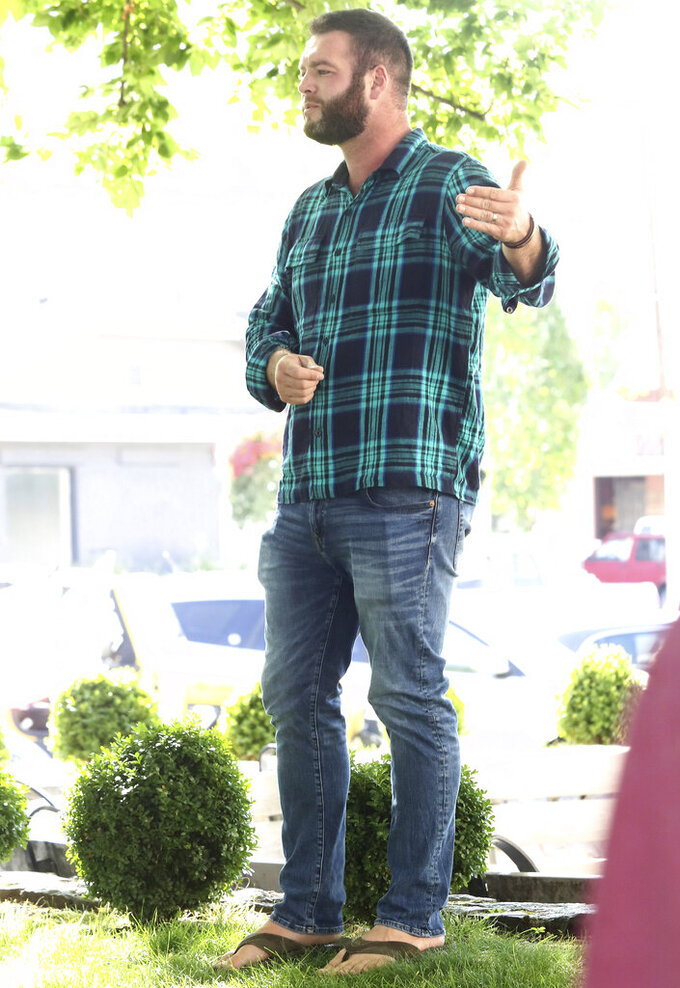 FILE - In this Aug. 25, 2020, file photo, then-Rep. Dallas Heard speaks to a group of about 90 people during a rally in front of the Douglas County Courthouse in Roseburg, Ore. A state senator who is on the far-right, who has rebelled against coronavirus pandemic restrictions and called more liberal lawmakers "punks" and "fools," was elected chairman of the Oregon Republican Party over the weekend. (Michael Sullivan/The News-Review via AP)/The News-Review via AP, File)

SALEM, Ore. (AP) — A far-right senator who has rebelled against coronavirus restrictions and supported protesters who stormed the Oregon Capitol has been elected chairman of the state Republican Party, showing how the GOP is taking a harder-line shift in some states and continuing to support former President Donald Trump.

The ascendancy of state Sen. Dallas Heard reflects the bitter frustration felt by Republicans in Oregon, where Democrats dominate the Legislature, governor's office and other statewide offices. Some even want their rural, conservative counties to become part of neighboring Idaho, where the GOP is dominant.

But the move further right has alienated some, including one of Oregon’s most prominent Republicans, Knute Buehler, a former lawmaker who left the GOP in disgust and became unaffiliated with any party. Buehler, who was the Republican nominee for governor in 2018 and for a congressional seat last year, told reporters that he left because Trump tried to overturn the presidential election and incited the Jan. 6 attack on the U.S. Capitol.

The final straw, Buehler said, came when the Oregon Republican Party said the violence at the U.S. Capitol was a “false flag effort” designed to discredit Trump, his supporters and all conservative Republicans.

Other states with internal GOP struggles include North Carolina, where the Republican Party unanimously approved a resolution to censure Sen. Richard Burr over his vote to convict Trump during his second impeachment trial. Reps. Liz Cheney of Wyoming, Fred Upton of Michigan and Tom Rice of South Carolina have faced similar scolding at home. So did Cindy McCain, who is the late Sen. John McCain's widow, Gov. Doug Ducey and former Sen. Jeff Flake in Arizona.

Heard did not immediately respond to a request for comment on his election as chairman of the Oregon GOP this past weekend. He has burnished a reputation as a conservative rebel and has railed against mask mandates, at one point standing on the Senate floor and removing his mask in protest.

During a Jan. 6 demonstration by Trump supporters outside the Oregon Capitol, he pointed at the building and shouted through a megaphone: “Don’t let any of these punks from that stone temple over there ever tell you that they are any better than you. Trust me, I work with these fools.”

“Don’t be violent, take action, trust in God and take down these fools in 2022,” Heard said.

On Monday, House Speaker Tina Kotek, a Democrat from Portland, said “it is disheartening to have people leading the party when they have such a poor assessment of democratic institutions and their fellow electeds."

"If you hold us in such low regard, I’m like, why are you even in office?” Kotek said at a virtual news conference.

On Dec. 21, Heard encouraged a demonstration where protesters stormed the state Capitol, which was closed to the public during an emergency session to deal with the pandemic. Protesters also pepper-sprayed police, smashed windows and assaulted journalists.

“I’m in full support of your right to enter your Capitol building,” Heard told the crowd.

A fellow Republican lawmaker is under investigation after security video showed he opened the door to let the mob in.

Heard also belongs to a group called Citizens Against Tyranny, which claims Democratic Gov. Kate Brown is infringing on their rights by ordering businesses to shut down, people to wear masks and follow other safety measures.

The group posted the names of people who reported violations of the rules to state authorities, calling them “filthy traitors.” Heard has since said the group’s leaders had never decided to publish the names, and the list was taken down.

Heard’s Senate biography says he owns and manages several rental properties, is a farmer and has owned a landscape contracting business. He was reelected last year, taking more than double the votes of his Democratic challenger. But Republicans are in the minority in the Legislature and say the needs of rural residents are being overlooked.

Underscoring that frustration, ballot initiatives on expanding the Idaho border to encompass wide swaths of rural Oregon are expected to be on the ballot in at least five Oregon counties in May.

A group called Move Oregon’s Border said county clerks have already awarded measure numbers to their initiatives in Grant, Malheur and Sherman counties. The group announced Monday that it has submitted 141% of the signatures required in Baker and Lake counties. The next step is signature verification.

“Oregon is a powder keg because counties that belong in a red state like Idaho are ruled by Portlanders,” said Mike McCarter, president of Move Oregon’s Border.

The chances of Oregon counties joining Idaho are slim because it would require votes by both the Oregon and Idaho legislatures as well as Congress.