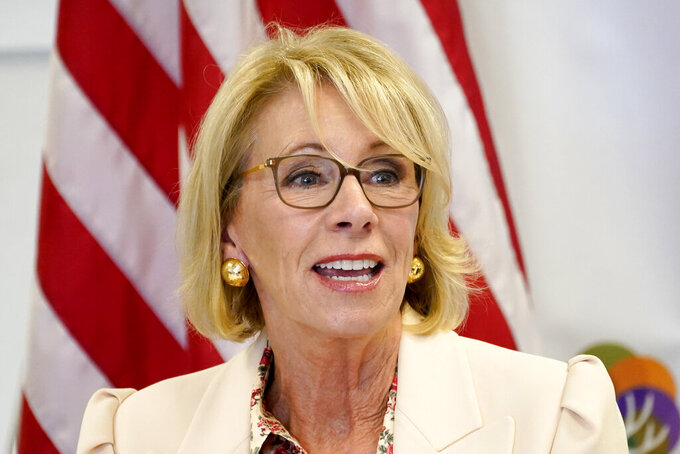 In a farewell letter to Congress on Monday, Education Secretary Betsy DeVos urged lawmakers to reject President-elect Joe Biden's education agenda, while imploring them to shield Trump administration policies that Biden has promised to eliminate.

DeVos does not explicitly acknowledge President Donald Trump’s election defeat nor does she refer to Biden by name. Instead, her letter offers lawmakers “some encouragement and closing thoughts.” As DeVos prepares to exit the Education Department, she says the coronavirus pandemic has exposed much that is “not encouraging" about U.S. education.

“While my time as Secretary is finite, my time as an advocate for children and students knows no limits,” she said in the letter, obtained by The Associated Press. It was sent to leaders in the House and Senate and to committees that oversee the Education Department.

DeVos offered an unemotional farewell to a Congress that had a chilly relationship with her from the start. Her 2017 Senate confirmation required a tiebreaking vote from Vice President Mike Pence, and she remained a persistent target for Democrats in both chambers.

DeVos made no mention of those disputes but instead offered “sincere gratitude for your partnership” on a range of education issues. Most of her major policies, however, were enacted through federal rulemaking and not through legislation passed by Congress. In her letter, she pledged to continue working with Congress “doing what’s right for America’s students.”

Much of the letter serves as a final appeal for school choice legislation that DeVos pushed for nearly two years while failing to gain support from Democrats and many Republicans. The proposal would provide tax breaks for donations to organizations that sponsor students attending private schools or other alternatives to traditional public education.

Critics have said the idea amounts to a federal voucher program, but DeVos said it would empower families to choose the best options for their children — an issue that she said has become increasingly important amid the pandemic.

“Many students — particularly our most vulnerable students — are suffering immeasurable harm as a result of schools failing to reopen and failing to educate,” she wrote. “Quite frankly, the ‘system’ has never figured out how to remediate students at scale, and I’m concerned it is incapable of achieving any kind of academic recovery now."

While her letter condemns schools' response to the pandemic, DeVos does not outline how to reopen. She has previously denied that it's her job to orchestrate a reopening, saying decisions are best left to local leaders.

For months, Trump and DeVos have pressed schools to reopen for in-person classes even as many school leaders say they lack the resources to do so safely. Biden has made it a priority to reopen schools within his first 100 days and says federal agencies will guide districts in their decisions.

More broadly, DeVos urged Congress to direct federal education funding directly to families rather than to schools. She argued that that teachers unions and interest groups are more concerned with supporting “the system” than students. She said funding for elementary and high schools should be treated more like federal grants for college, which go directly to students to attend schools of their choice.

“Given this precedent of choice and empowerment, it is impossible to understand how it is acceptable for federal taxpayer dollars to support a student attending the University of Notre Dame, but not for a student who wants to attend Notre Dame Prep High School,” she wrote.

Throughout his campaign, Biden characterized DeVos as an enemy of public schools, unqualified to lead the Education Department. He drew support from teachers unions after he vowed to nominate an education chief who, unlike DeVos, had experience working in public education.

Biden's nominee, Miguel Cardona, is the state education chief in Connecticut and a former teacher and assistant superintendent in a public district. He has drawn attention for his work to close student achievement gaps and to advocate for schools to reopen during the pandemic.

DeVos’ letter directly opposes several of Biden’s top education priorities, including his proposal to triple federal Title I funding for schools serving low-income students. The letters says federal education funding has already tripled since 1960 but has failed to translate to better outcomes on standardized tests.

She also blasted proposals to make college free for certain students and to erase huge swaths of student debt, which have both been backed by Biden.

“I hope you also reject misguided calls to make college ‘free’ and require the two-thirds of Americans who didn’t take on student debt or who responsibly paid off their student loans to pay for the loans of those who have not done the same,” she said.

At the same time, she asked Congress to preserve her recently enacted rules on the handling of campus sexual assaults. The policy bolsters protections for the accused and narrows the scope of cases colleges must investigate. DeVos says it ensures fairness for all students, but survivor advocacy groups argue it weakens protections for victims.

Biden has vowed to reverse DeVos' policy and bring back Obama-era guidance that it replaced. In her appeal to Congress, DeVos says her regulation “restores fairness on campuses by upholding all students’ rights."