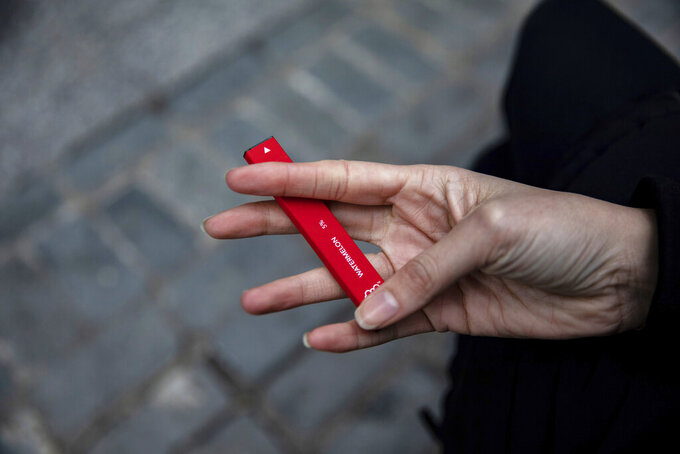 FILE - In this Jan. 31, 2020 file photo a woman holds a Puff Bar flavored disposable vape device in New York. U.S. health officials are cracking down on the brand of fruity disposable e-cigarettes that is popular with teenagers, saying the company never had permission to launch in the U.S. The Food and Drug Administration sent a letter Monday, July 20 telling the maker of Puff Bar e-cigarettes to remove its products from the market, including flavors like Mango, Pink Lemonade and Strawberry. (AP Photo/Marshall Ritzel, File)

WASHINGTON (AP) — U.S. health officials are cracking down on fruity disposable electronic cigarettes popular with teenagers, saying the companies never received permission to sell them in the U.S.

The Food and Drug Administration sent a letter Monday telling the company behind Puff Bar e-cigarettes to remove them from the market within 15 business days, including flavors like mango, pink lemonade and strawberry. An undated notice on the company's website says online sales and distribution have ceased “until further notice.”

The agency also sent warning letters to nine other companies either selling similarly unauthorized e-cigarettes or nicotine solutions that illegally appeal to children. Some of those mimic packaging of sweets and cereals like Twinkies and Cinnamon Toast Crunch.

The seller of Puff Bar, Cool Clouds Distribution of Glendale, California, did not immediately respond to calls or emails seeking comment Monday.

The regulatory action comes months after anti-vaping advocates warned that disposable vapes like Puff Bar were a glaring loophole in the FDA's ban on flavored e-cigarettes. That policy, which took effect in February, narrowly targeted reusable vaping devices like Juul, the blockbuster brand that helped trigger the teen vaping craze in the U.S. Under the policy, only menthol and tobacco flavors were allowed for those devices. But the flavor restrictions did not apply to disposable vaping products like Puff Bar.

The Campaign for Tobacco-Free Kids in a statement called the FDA action a “welcome, necessary and overdue step,” but also noted that it only addresses a “small number of these products and does not even cover all disposable e-cigarettes.”

The group has called for a ban on flavors for all types of vaping and tobacco products, including menthol. Vaping proponents say flavors can help adult smokers kick cigarettes, though the FDA has never approved any e-cigarette for that purpose.

All U.S. vaping companies face a September deadline to submit their products for FDA review. The long-delayed process is part of the FDA’s yearslong effort to regulate the multibillion-dollar vaping industry, which includes thousands of e-cigarette devices and nicotine solutions.

For months, the FDA has been consumed with the coronavirus outbreak, reviewing new tests and treatments. Earlier this year, the agency suspended in-person inspections at vape shops and convenience stores aimed at enforcing sales restrictions. Late last year, the U.S. raised the legal age to purchase e-cigarettes and all other tobacco and vaping products from 18 to 21.