Fed reports slowing US economic activity due to virus surge 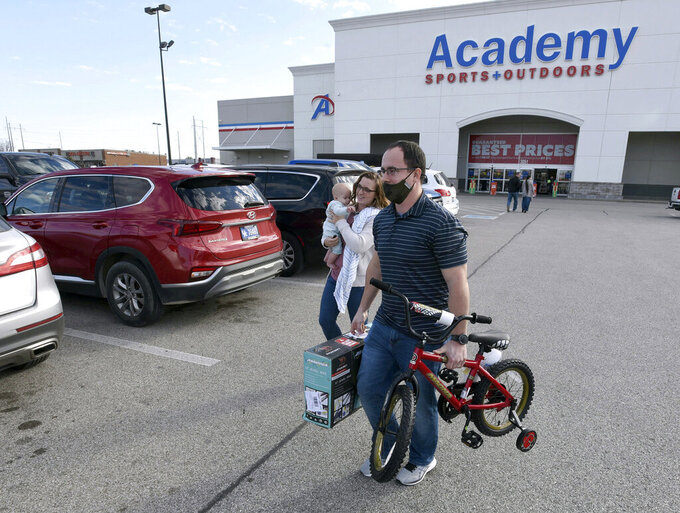 FILE - In this Friday, Nov. 27, 2020, file photo, Aaron and Jessica Elder, of Hartford, carrying Boyd, 7 months, purchased two bikes for their children for Christmas presents while shopping on Black Friday at Academy Sports + Outdoors in Owensboro, Ky. A Federal Reserve survey of business conditions around the country found that economic activity in several regions was slowing in November as coronavirus cases surged. The report, released Wednesday, Dec. 2, 2020, and known as the beige book, will be used by Fed officials when they hold their last meeting of the year on Dec. 15-16 to discuss possible changes to the central bank's interest-rate policies. (Alan Warren/The Messenger-Inquirer via AP, File)

WASHINGTON (AP) — A Federal Reserve survey of business conditions around the country found that economic activity in several regions slowed in November as coronavirus cases surged.

The Fed report released Wednesday said that overall, the Fed's 12 regional banks characterized the economic expansion as “modest or moderate." But it noted that three Midwest regions and the Philadelphia region reported activity had begun to cool in early November as COVID-19 cases surged.

Four districts reported “little or no growth” during November, while five others reported that activity remained well below pre-pandemic levels in some sectors.

Kathy Bostjancic, chief U.S. financial economist for Oxford Economics, said the latest Fed survey showed the recovery continues to be uneven across many sectors of the economy.

The report said that among the sectors doing better were manufacturing, housing construction and existing home sales. But banks said there had been deterioration in their loans, particularly those to retailers and the leisure and hospitality industries.

The report said that most districts found that local businesses' optimism has “waned,” with many citing concerns about the wave of virus cases and renewed lockdown restrictions. The report also said there was concern about the looming expiration dates for government support programs, including extended unemployment benefits and the moratoriums that have been in place on evictions and foreclosures.

The report, known as the beige book, will be used by Fed officials when they hold their last meeting of the year on Dec. 15-16 to discuss possible changes to the central bank's interest-rate policies.

In response to the deep recession brought on when the virus struck with force in March, the Fed slashed its key interest rate to a record low and began buying billions of dollars in Treasury bonds and mortgage-backed securities to put downward pressure on long-term rates.

The Fed is expected to maintain its ultra-low interest rates over the next three years. But it may also decide as soon as this month's meeting to expand the support it is providing through its bond purchases, especially if Congress is unable to pass further economic relief legislation in the lame-duck session.

At a congressional hearing Wednesday, Fed Chairman Jerome Powell said that increased support from Congress is needed as a bridge between the current economic troubles and the time next year when a virus vaccine is expected to be widely available.

The new Fed survey said that while employment increased during November, the pace of job gains was slow at best.

Many of the Fed's business "contacts noted that the sharp rise in Covid-19 cases had precipitated more school and plant closings and renewed fears of infection, which have further aggravated labor supply problems,” the report said. “Providing for childcare and virtual schooling needs was widely cited as a significant and growing issue for the workforce, especially for women.”

The Fed survey said that the staffing issues had prompted some companies to extend greater accommodations for flexible work schedules.

The Fed's St. Louis regional bank, meanwhile, reported that conditions had deteriorated toward the end of November, while the Minneapolis region reported a softening in consumer demand due to rising virus infections.

The Dallas district said that energy activity remained depressed and business prospects were “highly uncertain due to looming concerns surrounding political uncertainty and the unknown course of the pandemic.”