Fed to sell off assets from an emergency loan program 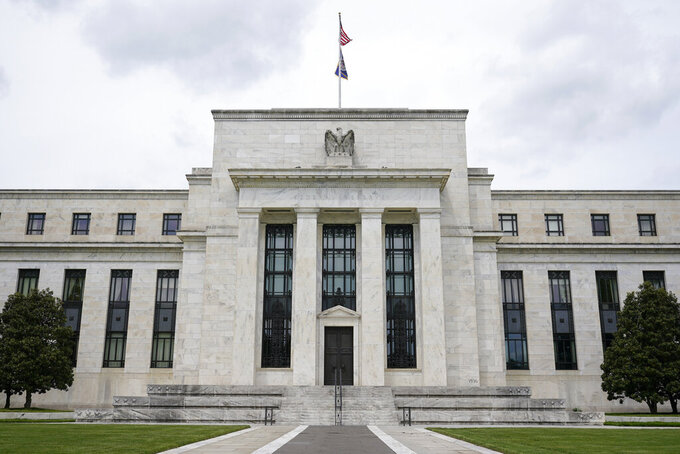 FILE - In this May 4, 2021, file photo is the Federal Reserve building in Washington.The Federal Reserve says it will start selling off the holdings of one of its emergency lending programs created last year to stabilize financial markets at the height of the pandemic crisis. The Fed announced Wednesday, June 2, it will begin winding down the portfolio of the Secondary Corporate Credit Facility, which at the close of last year held $14.2 billion in assets. (AP Photo/Patrick Semansky, File)

WASHINGTON (AP) — The Federal Reserve said Wednesday that it will start selling off the holdings of one of its emergency lending programs created last year to stabilize financial markets at the height of the pandemic crisis.

The Fed will begin winding down the portfolio of the Secondary Corporate Credit Facility, which at the close of last year held $14.2 billion in assets.

The asset sales from the facility will be “gradual and orderly and will aim to minimize the potential for any adverse impact on market functioning,” the Fed said.

The corporate facility was one of a number of emergency lending vehicle closed on Dec. 31 in a decision by then-Treasury Secretary Steven Mnuchin.

That action drew criticism from Democratic lawmakers who contended at the time that Mnuchin was trying to restrict efforts by the Federal Reserve to support the economy just as President-elect Joe Biden was taking office.

The Fed announcement came as speculation has increased that the central bank could be preparing to make a decision on when it might start trimming its $120 billion in monthly purchases of Treasury bonds and mortgage-backed securities. Those purchases are being made to give the economy a boost by putting downward pressure on long-term interest rates.

The Fed said that its announcement on selling off the small amount of holdings in the corporate lending facility was not related to its handling of monetary policy. The sales from the corporate loan fund are expected to be completed by the end of the year.

The emergency lending programs came in response to credit markets nearly freezing in March 2020 as the pandemic triggered lockdowns in the United States and resulted in the loss of 22 million jobs last spring.

In his December decision, Mnuchin said in a letter to Fed Chairman Jerome Powell that the programs he was allowing to end had “clearly achieved their objectives.”

But in a rare disagreement between the Fed and Mnuchin, the central bank said at the time that it would have preferred that the "full suite of emergency facilities established during the coronavirus pandemic continue to serve their important role as a backstop for our still-strained and vulnerable economy."

However, the economy, which had slowed at the end of last year, has gained strength again this year, helped by a new $1.9 trillion rescue package Biden pushed through Congress in March as well as the rollout of coronavirus vaccines. The Fed's remaining emergency loan programs that were not closed have seen only moderate use this year.