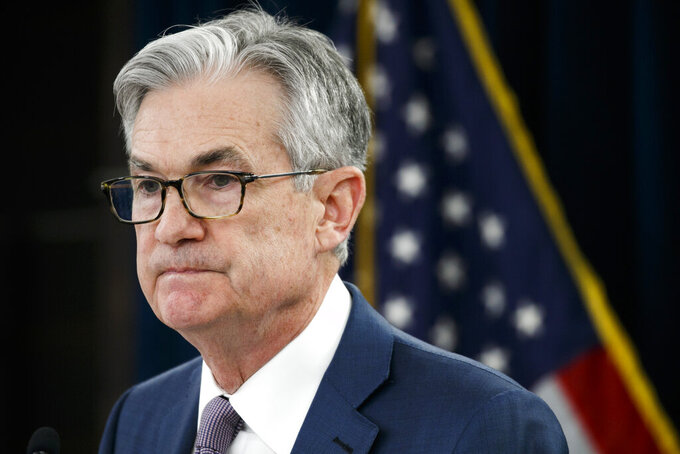 FILE - In this March 3, 2020, file photo, Federal Reserve Chair Jerome Powell pauses during a news conference, to discuss an announcement from the Federal Open Market Committee, in Washington. A group of congressional Democrats introduced legislation Wednesday, Aug. 5, that would require the Federal Reserve to pursue the elimination of racial disparities in jobs, wealth and income as one of its policy goals. (AP Photo/Jacquelyn Martin, File)

A group of congressional Democrats introduced legislation Wednesday that would require the Federal Reserve to pursue the elimination of racial disparities in jobs, wealth and income as one of its policy goals.

The legislation would also require the Fed's chair, currently Jerome Powell, to report every six months on the status of wealth and income gaps and the Fed's efforts to counter them as part of its regular reports to Congress. The Fed now has a dual mandate that requires it to seek “maximum employment” and stable prices.

The bill was sponsored by Rep. Maxine Waters, D-Calif., chairwoman of the House Financial Services Committee, and Sen. Elizabeth Warren, the top Democrat on the Senate Banking Committee. Eighteen other members of the House and Senate signed on as co-sponsors. The legislation is unlikely to pass Congress this year.

The proposal reflects an increasing focus on racial wealth and income gaps among Democrats, as the coronavirus has disproportionately affected African Americans. It also comes in the wake of weeks of protests this summer stemming from the deaths of several Black Americans at the hands of police.

“As the COVID-19 pandemic crisis and its economic impacts disproportionately affect communities of color, and communities around the country march in the streets for justice, the Federal Reserve must do everything it can to ensure the recovery is equitably shared,” Waters said in a statement.

Some economists argue that the Fed's current policies disadvantage African-Americans. Jared Bernstein, a former economic adviser to Biden, and Janelle Jones, managing director for policy and research at Groundwork Collaborative, a progressive nonprofit, argued in a recent paper that if the Fed typically raises interest rates when overall unemployment falls to 4%, then the Black rate will likely be much higher, closer to 8%, at that time. Yet when the Fed has kept rates low amid low unemployment, the Black rate has fallen further and even slightly narrowed the gap with whites.

Powell and other Fed officials have spoken much more openly about the disparate impact of the current recession on racial minorities and lower-income workers than past Fed leaders.

“The downturn has not fallen equally on all Americans, and those least able to shoulder the burden have been the most affected,” Powell said at a June 10 news conference. “In particular, the rise in joblessness has been especially severe for lower-wage workers, for women, and for African Americans and Hispanics.”