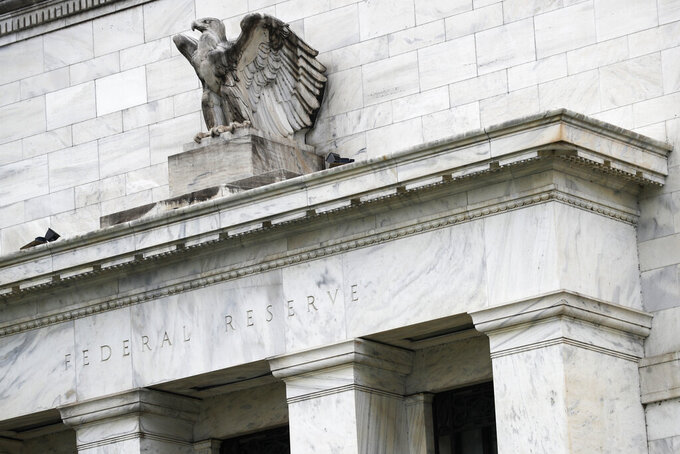 FILE - This May 22, 2020, file photo shows the Federal Reserve building in Washington. Newly released transcripts show that many Federal Reserve officials had concerns in late 2015 over whether they were making a mistake in raising a key interest rate for the first time in nearly decade. Transcripts of their discussions, released Friday, Jan. 8, 2021 showed that the chief concern was whether the Fed would be acting prematurely in starting to raise rates given how low inflation was at the time. (AP Photo/Patrick Semansky, File)

WASHINGTON (AP) — Newly released transcripts show that many Federal Reserve officials had concerns in late 2015 over whether they were making a mistake in raising a key interest rate for the first time in nearly decade.

Transcripts of their discussions, released Friday, showed that the chief concern was whether the Fed would be acting prematurely in starting to raise rates given how low inflation was at the time.

In the end, the Fed unanimously approved a quarter-point hike in its policy rate and the first change in the rate since the central bank slashed it to a record low of 0 to 0.25% in December 2008 at the height of the financial crisis.

During their debate on the change, many officials expressed worries that the small rate hike was being made even though inflation for the past six years had fallen below the Fed's 2% target.

The Fed manages interest rates to achieve two goals — keeping inflation under control while promoting maximum employment. It hikes rates to slow the economy if inflation appears to be rising too quickly and it cuts rates to give the economy a boost if the jobless rate is too high.

Fed Chair Janet Yellen, who has been tapped by President-elect Joe Biden to be Treasury secretary, said at the time in arguing for the small initial rate hike that inflation had been held down in 2015 by a sharp drop in oil prices which had kept the Fed's inflation target running below 0.5%. But she said with oil prices rising again, she was “reasonably confident” that inflation over the next two to three years would reach the Fed's 2% target, and for that reason a small initial move to hike rates was warranted.

However, in 2016 falling prices for such things as cell phones kept inflation low and since that time, inflation has continued to run below the Fed's 2% target.

Yellen noted that the unemployment in late 2015 stood at 5%, 0.7 percentage-point below where it was at the beginning of the year and businesses were beginning to talk about rising wage pressures. As it turned out, unemployment continued to decline, hitting a 50-year low of 3.9% before the pandemic-induced recession started in February 2020.

Daniel Tarullo, at the time a member of the Fed's board, said he was going along with the December 2015 rate hike but mainly because he believed it was important for the Fed board members to show unanimity with the position taken by the Fed chair.

“The moment of liftoff after seven years would be a particularly bad time to enter a dissent and thereby risk the chair's leadership position at a critical time in monetary policy,” Tarullo said.

Fed board member Lael Brainard also expressed doubts about the need for a rate hike given the low inflation, but said she would go along with the modest increase.

While winning the vote, Yellen let it be known that she was mindful of opposing views, joking at the end of the discussion that any Fed official who wanted to watch her after-the-meeting news conference and “see me get skewered” by reporters could do so.

The Fed raised rates four times in 2018 after Yellen was replaced by Jerome Powell as Fed chair by President Donald Trump. Trump launched an unprecedented attack on the Fed’s rate hikes fearing negative affect on economic growth, breaking with the practice of past presidents to respect the Fed’s independence.

Beginning in 2019, the Fed started cutting rates and in 2020 after the pandemic pushed the country into a recession, the Fed returned its benchmark rate to the record-tying low of 0 to 0.25%, where it had been after the 2008 financial crisis.

The Fed releases minutes which summarize its closed-door discussions with a three week lag after each meeting but does not release transcripts of the meetings until five years have passed.