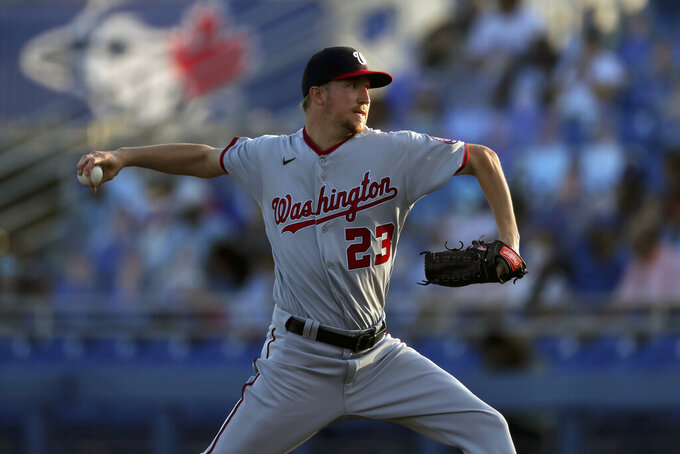 Fedde (2-2) allowed one run and two hits, including a fifth-inning solo homer by Lourdes Gurriel Jr. The right-hander struck out seven and walked three.

“With cutter, sinker, the combination is really good because he works both sides of the plate,” Washington manager Dave Martinez said. “Today he threw a lot of curveballs, and it was effective for him as well. When you get can all those pitches in the strike zone as you can see he's real tough to hit.”

Harrison got his third homer in 16 at-bats against Steven Matz (4-1), a three-run shot in the fourth that made it 6-0.

Springer, who signed a team-record $150 million, six-year deal this offseason, went 0 for 4. The World Series MVP when Houston won its first title in 2017 missed time in spring training and the start of the season because of a strained oblique and later due to a right quadriceps strain.

Trea Turner had four hits and Josh Bell also homered for the Nationals.

Toronto got an eighth-inning solo homer from Bo Bichette.

Matz, acquired from the New York Mets in January after going 0-5 with a 9.68 ERA last season, had won his first four starts for Toronto. He gave up six runs and eight hits over 3 2/3 innings.

The lefty is 1-8 against Washington. Since the start of last season, Matz has allowed 22 earned runs and eight homers over 14 innings in four games against the Nationals.

“He just wasn't as sharp today," Montoyo said. “He still has the stuff but didn't locate as well.”

Ryan Zimmerman drove in two with a single during a three-run third. Bell hit a two-run homer in the fifth.

Toronto loaded the bases with two outs in the third but failed to score when Turner, at short, fielded Randal Grichuk’s slow grounder barehanded and threw him out at first.

“I remember that ball just trickled by me ... you've got to be kidding me,” Fedde said. “I think my initial reaction was ‘Oh no, it's bare hand.' Then an unbelievable play.”

Blue Jays catcher Danny Jansen went 0 for 3 with a walk. He is hitless in a career-long 34 at-bats.

Springer feels that teammate Vladimir Guerrero Jr. hasn’t even scratched the surface of what he can become. Guerrero hit three homers and drove in seven runs at the age of 22 years, 42 days in Tuesday’s 9-5 win over Washington to become the youngest player ever with that stat line.

“I think the most impressive part is a lot of people forget how young he actually is,” Springer said. “I think he’s starting to understand the things that he can do offensively."

Guerrero went 0 for 3 and was intentionally walked Wednesday.

Blue Jays 3B Joe Panik appeared to lose Zimmerman’s high-hop single during the first inning in the sun, which was brightly shining just over the low single deck roof at TD Ballpark.

Nationals: RHP Stephen Strasburg (right shoulder) could throw off a bullpen mound this weekend. ... Washington is evaluating if LHP Jon Lester (COVID-19) will pitch next in a big league game or again at the alternate site. He had a bullpen session Wednesday.

Blue Jays: Hyun Jin Ryu (right glute strain) went on the 10-day IL but Montoyo is hopeful the left-hander will miss only one start.