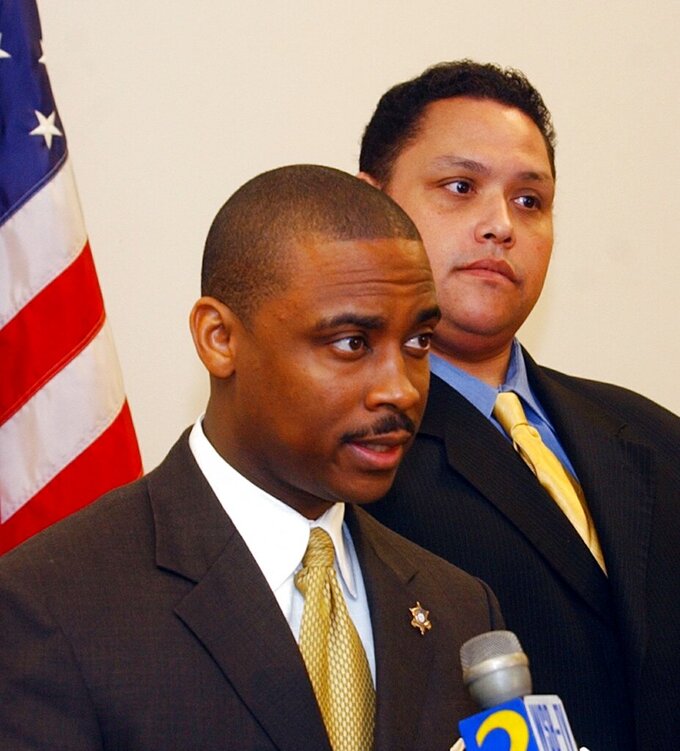 FILE - In this Jan. 11, 2005, file photo, Clayton County Sheriff Victor Hill, left, is flanked by a member of his legal team, attorney Rolf Jones, right, as he speaks during a news conference, in Jonesboro, Ga. The Atlanta-area sheriff, Hill, is accused of violating the civil rights of several people in his agency's custody by ordering that they be unnecessarily strapped into a restraint chair and left there for hours, according to a federal indictment. The indictment against Sheriff Hill was filed April 19, 2021, and was unsealed by a federal judge Monday, April 26. (AP Photo/Gene Blythe, File) 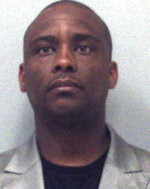 ATLANTA (AP) — An Atlanta-area sheriff who's no stranger to controversy is accused of violating the civil rights of several people in his agency's custody by ordering that they be unnecessarily strapped into a restraint chair and left there for hours, according to a federal indictment.

The indictment against Clayton County Sheriff Victor Hill was filed April 19 and was unsealed by a federal judge Monday. It says Hill regularly received training that said force may not be used as punishment and had approved a policy that says a restraint chair may be used with a violent or uncontrollable person to prevent injury or property damage if other techniques are ineffective.

The policy emphasizes that the restraint chair “will never be authorized as a form of punishment.”

But the indictment, which accuses Hill of violating the civil rights of four people in his custody, says the sheriff repeatedly ordered people restrained for hours even though they posed no threat and had complied with deputies and that the men suffered pain and bodily injury as a result.

“Sheriff Hill's abuse of power not only harmed the victims as I have described, but they erode the trust that the community places in law enforcement and the work that it does,” Acting U.S. Attorney Kurt Erskine told reporters.

“I will continue to focus on the mission of fighting crime in Clayton County for continued success,” Hill said in the statement on Nixle, a public messaging system.

Drew Findling, one of Hill's lawyers, said they have been aware of the federal investigation and have done their own investigation and that those four allegations “do not involve any physical injury at all.” Findling said Hill is “a beloved sheriff who is overwhelmingly supported by his community" and called the case against him “nonsensical.”

Georgia law provides for the governor to convene a three-person panel to consider the suspension of elected officials who are indicted while in office. Cody Hall, a spokesman for Gov. Brian Kemp, said in an email that they have not received the indictment yet and declined to comment on what action the governor might take.

On Hill's orders, deputies unnecessarily and unreasonably strapped four people into a restraining chair for hours, the indictment says.

One man was arrested without incident in February 2020 on charges stemming from an argument with two women at a grocery store three weeks earlier. Hill confronted the man during booking, asking what he had been doing in Clayton County, the indictment says.

“It's a democracy, sir. It's the United States," the man replied, according to the indictment.

A 17-year-old boy accused of vandalizing his family home during an argument with his mother in April 2020 was arrested by a deputy without incident a short time later. The deputy spoke with Hill and texted him a photo of the teen in a police car.

“How old is he?” Hill texted, according to the indictment.

A man arrested in April 2020 after a domestic disturbance with possible drug use pretended to pass out and then walked out of a hospital after refusing treatment and was uncooperative with arresting officers. He wasn't combative once he arrived at the jail.

Hill berated him and the teen while they were strapped into restraint chairs near each other, the indictment says.

Also in April 2020, Hill called a man who'd had a dispute with one of his deputies over landscaping work he'd done for the deputy in Butts County. When Hill asked why the man was harassing the deputy, the man used an expletive and said the deputy should pay his bill.

Unsure it was actually the sheriff, the man called back several times using FaceTime until Hill answered and removed a mask he was wearing. Hill then texted the man to warn him not to text or call anymore. The man responded by text, “so this is Victor Hill correct.” Hill again warned him by text not to call or text anymore.

Hill then instructed a deputy the next day to take out a warrant for harassing communications and then texted the man to tell him to turn himself in, the indictment says. Hill then sent a fugitive squad armed with handguns and AR-15 rifles to try to arrest the man on the misdemeanor charge, the indictment says.

The man hired a lawyer and turned himself in.

Hill has been controversial since he first became sheriff in Clayton County, just south of Atlanta.

He fired 27 deputies on his first day in office in 2005 and used a tank owned by the sheriff’s office during drug raids as part of a tough-on-crime stance adopted in his first term.

He failed to win re-election in 2008, but voters returned him to office in 2012 despite the fact that he faced more than two dozen criminal charges in a corruption case. A jury later acquitted him of all 27 charges, clearing the way for him to continue as sheriff.

Hill pleaded no contest to a reckless conduct charge in August 2016 after shooting and injuring a woman in a Gwinnett County model home in May 2015. Hill and the woman said it was an accident that happened while they were practicing police tactics.

Civil rights groups sued him last year, claiming he was failing to protect people held in the Clayton County jail from the risk of contracting the coronavirus. That suit is still pending.