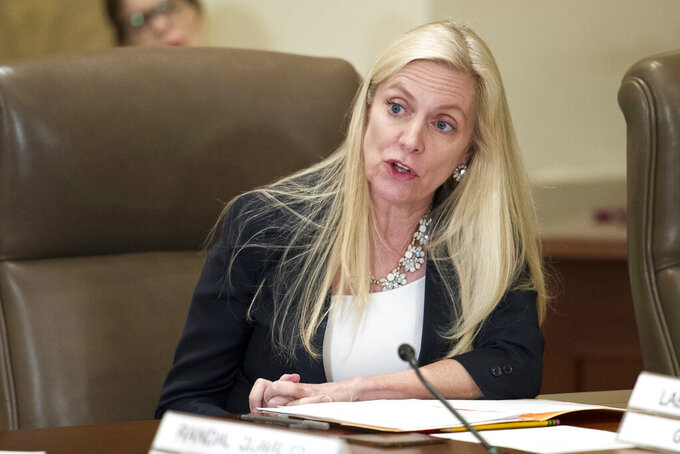 FILE- In this June 14, 2018, file photo Federal Reserve Board Governor Lael Brainard participates in an open meeting in Washington. Brainard warned Tuesday, July 14, 2020, that the U.S. economy appears to be slowing after an initial burst of recovery and called for the Fed to take aggressive steps to spur growth. (AP Photo/Cliff Owen, File)

WASHINGTON (AP) — Federal Reserve Governor Lael Brainard warned Tuesday that the U.S. economy appears to be slowing after an initial burst of recovery and called for the Fed to take aggressive steps to bolster growth.

Brainard said that hiring and consumer spending bounced back more strongly than expected in May and June. But that rebound mostly reflected a rapid reopening of restaurants, bars and other businesses in many states, Brainard said. Those reopenings have since caused ongoing spikes in viral infections that could reverse much of that progress, she said. Brainard is an influential “dove” on the Fed's board, which means she typically prioritizes keeping interest rates low to support jobs and worries less about inflation.

“Rolling flare-ups or a broad second wave of the virus may lead to widespread social distancing—whether mandatory or voluntary—which could weigh on the pace of the recovery and could even presage a second dip in activity," Brainard said in prepared remarks. “Some high-frequency indicators tracked by Federal Reserve Board staff ... suggest that the strong pace of improvement in May and the first half of June may not be sustained.”

Brainard's warning comes as California's governor has reimposed a broad business shutdown in that state in response to a jump in new cases of the coronavirus. Several other states, including Florida and Texas, are also reversing their efforts to reopen their economies. Confirmed case counts are rising in at least 38 states.

Brainard said Fed policy should do more to boost the economy. She noted that “forward guidance,” in which the Fed explicitly indicates when it might make changes to its interest rate policies, “constitutes a vital way” that the Fed could support the economy. The Fed previously used such policies after the 2008-2009 recession, in an effort to give businesses and consumers more certainty about future interest rates.

The Fed could indicate that it will refrain from lifting its benchmark short-term interest rate from its current level of nearly zero until inflation returned to the central bank's 2% target, she said.

Fed policymakers may also want to consider targeting near-zero interest rates on short- and medium-term bonds, Brainard said, a groundbreaking policy that the Fed hasn't used before but that has been pursued by central banks in Japan an Australia.