FEMA vaccination sites to close as California ramps up shots 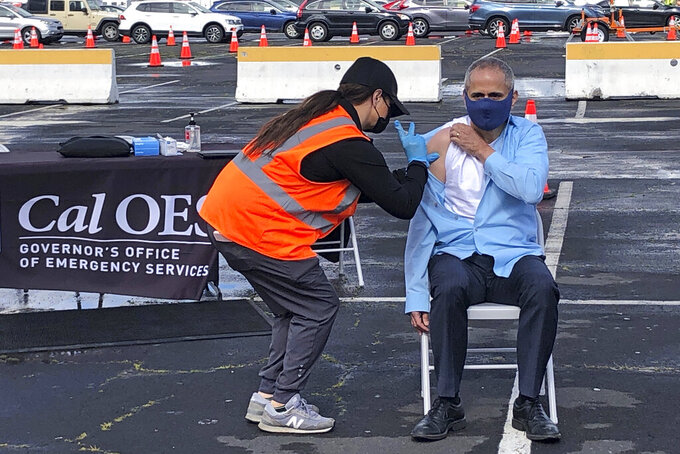 LOS ANGELES (AP) — The Federal Emergency Management Agency plans to stop operating two mass vaccination sites in California next month, just days before the state makes everyone 16 and older eligible for a shot.

The two sites in Oakland and Los Angeles opened in February for an eight-week pilot program that concludes on April 11. The sites will switch from the Pfizer to the Johnson & Johnson vaccine, which requires just one shot, during the final two weeks of operation so that people do not have to sign up for a second dose elsewhere.

State and county officials said they would have liked the program to continue, though it provided a small fraction of California's overall shots. Each site was set up to vaccinate 6,000 people per day but they have been administering up to 7,500 shots per day, according to the state Office of Emergency Services. Since the sites are federally managed, those shots are separate from California's overall weekly allocation, which is now about 1.8 million shots per week.

Gov. Gavin Newsom announced Thursday the state will allow everyone 16 and older to be eligible for the vaccine starting on April 15. Right now people 65 and over, younger people with certain health conditions and farmworkers, teachers and several other occupations are eligible. The state is soon expecting a much greater supply of doses.

The two sites combined have administered half a million doses, with about 67% going to underserved communities and people of color, according to OES.

Brian Ferguson, a spokesman for the agency, said the state is working with Los Angeles and Alameda counties to see if they can continue to put the sites at the Oakland Coliseum and the California State University, Los Angeles, campus to use. The state asked for an extension of the program but it has not been granted.

“We’ve been clear that California is ready to continue the mission if further funding and vaccines would be allocated by the federal government,” he said.

Officials in the county and city of Los Angeles are in discussions about maintaining the site in some fashion, said Dr. Paul Simon, the chief science officer for Los Angeles County.

“While we are disappointed, we understand,” he said about the site's closure.

It’s not yet been determined if the campus would remain as a site or its vaccines would be distributed to smaller community sites.

“We recognize it’s a really important site,” Simon said, adding that officials do not want to scale back vaccine infrastructure just as more supply is on its way.

Representatives for the Alameda County Public Health Department, Oakland Mayor Libby Schaaf and Alameda County Board of Supervisors President Keith Carson did not respond to requests for comment about the closure of the Oakland site.

Frank Mansell, a spokesman for FEMA, said while the sites may keep operating in some fashion, the special allocation of doses will not continue after April 15. The closure of California's sites does not mean sites will be opening elsewhere, he said.

Sami Gallegos, a spokeswoman for the California Department of Public Health, said California will continue to pursue its equity goals through other sites. The state has reserved 40% of all doses for people in the least advantaged neighborhoods, many of whom were vaccinated at the two federal sites. The state has more than 2,000 vaccination sites, she said.

“California’s commitment to equity is much more than just two vaccination sites," she said.

This story was first published on March 26, 2021. It was updated on March 27, 2021 to correct that vaccination sites will close April 11, not April 15. Additionally, corrects Frank Mansell’s last name. It is Mansell, not Mancel.