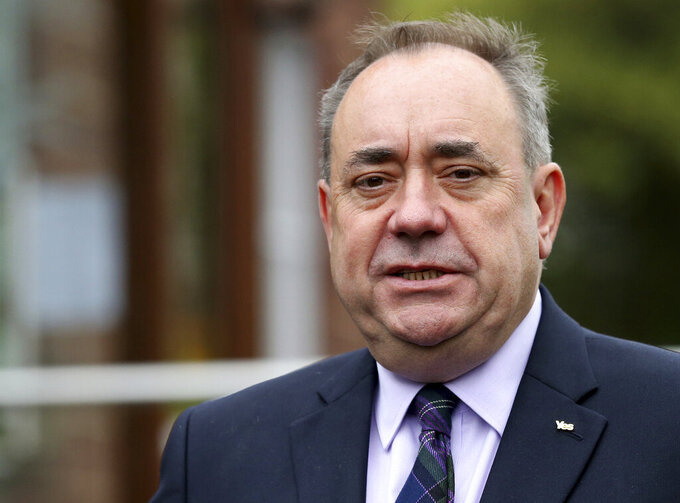 But now Scotland's former leader and his successor as first minister are locked in a feud that is tearing apart their Scottish National Party, even as its goal of an independent Scotland outside the United Kingdom is closer than ever.

The two former allies have traded accusations for months over who knew what and when about allegations against Salmond, who was tried and acquitted last year on sexual assault charges.

Salmond was scheduled to tell his version of the story Wednesday to a Scottish Parliament inquiry into how the Edinburgh-based government handled the allegations. He claims the sexual misconduct accusations, first leveled in 2018, were part of a witch-hunt, and he won a civil lawsuit when Scotland’s highest civil court ruled in 2019 that the way the Scottish government had handled the matter was unlawful.

But Salmond on Tuesday canceled his appearance after his written witness statement was removed from the Scottish Parliament website. He had refused to testify, if it was not made public. It was taken down after the national prosecutors’ office expressed concern about potential contempt of court, and later partially republished with some sections redacted.

Salmond accuses people within the Scottish National Party and the Scottish government of a “malicious and concerted effort” to sideline him and hurt his reputation. He has also accused Sturgeon of lying about her meetings with him and of breaking the code of conduct for government ministers. If that was found to be true, she would have to resign.

Sturgeon, who is due to testify in the inquiry next week, accused her predecessor of making “wild claims” that there was a conspiracy against him.

Salmond, who led the SNP for two decades and was Scotland's first minister between 2007 and 2014, built the separatist party into a major political force and took the country to the brink of independence by holding a 2014 referendum.

He stepped down as first minister after the “remain” side won, and Sturgeon, his friend and deputy, replaced him.

In 2019, Salmond was charged with sexual assault and attempted rape after allegations by nine women who had worked with him as first minister or for the party. Salmond called the charges “deliberate fabrications for a political purpose," and was acquitted after a trial in March 2020.

The SNP has become increasingly split between Salmond's supporters, who want a new independence referendum come what may, and supporters of the more cautious Sturgeon. Sturgeon and her allies are also critical of Salmond’s efforts to stay in the public eye, especially his talk show on the Kremlin-funded English-language television station RT.

Sturgeon’s popularity, meanwhile, has been boosted by her response to the coronavirus pandemic. Her calm, measured style in regular media briefings contrasts with the erratic messaging and frequent policy shifts of U.K. Prime Minister Boris Johnson, who is unpopular in Scotland.

The crisis is amplified by the hothouse atmosphere of politics in Scotland, a small nation of 5.5 million. Among the Scottish National Party figures accused by Salmond of colluding against him is chief executive Peter Murrell — Sturgeon’s husband.

The feud threatens to derail a party that is riding high in the polls and increasingly confident it can secure its long-held goal of leading Scotland out of the United Kingdom.

Scotland's 2014 referendum was billed at the time as a once-in-a-generation decision. But the SNP says Brexit has fundamentally changed the situation by dragging Scotland out of the European Union even though a majority of Scottish voters in the U.K.'s 2016 EU membership referendum opted to remain in the EU. The U.K. as a whole voted narrowly to leave the bloc.

An election for the Scottish Parliament is due in May, and the SNP has a strong lead in opinion polls. Sturgeon says that if she wins a majority, she will push for a new independence referendum and challenge Johnson in the courts, if the British government refuses to agree.

John Curtice, professor of politics at the University of Strathclyde, said the twisting Salmond-Sturgeon saga did not yet appear to have had a major impact on public opinion ahead of an election overshadowed by the impact of Brexit and the coronavirus pandemic.

“People won’t have read these detailed documents,” he said. “They know that Alex thinks that somebody was conspiring against him, and Nicola denies it.

“The backdrop to this election is the most important public policy decision that the U.K. has taken at least since 1973, and the worst pandemic in a century," Curtice said. "So there’s plenty of competition for people’s attention.”