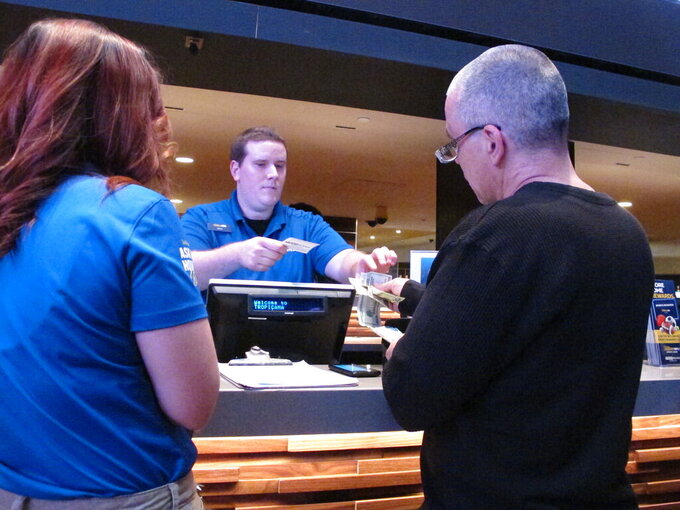 A gambler makes a sports bet at the Tropicana casino in Atlantic City N.J. on March 8, 2019, the last year the March Madness college basketball tournament was held. The American Gaming Association predicts 47 million people will bet on this year's tournament, about the same as two years ago. But 8% fewer plan to fill out brackets pools because many offices remain closed due to the coronavirus pandemic. (AP Photo/Wayne Parry)

ATLANTIC CITY, N.J. (AP) — Fewer Americans expect to fill out brackets for the NCAA's college basketball tournament this year, but the overall number of people making bets on March Madness should remain about the same as the last time the tournament was held, according to the gambling industry's national trade association.

The American Gaming Association released figures Sunday predicting that more than 47 million Americans plan to make a bet — legal or otherwise — on March Madness this year. That's about the same number that said they planned to bet on the 2019 tournament.

The tournament was canceled in 2020 shortly before it was scheduled to begin just as the coronavirus was deemed a pandemic by the World Health Organization.

The virus will affect this year's tournament, too: It is the main reason, according to the survey, that 36.7 million Americans will fill out a bracket, down 8% from 2019, because many offices and other places of employment remain closed, with employees working from home, or not at all.

But the slack is expected to be almost totally made up for by the continuing rapid expansion of legal sports betting in the U.S. The association says 30.6 million Americans will bet in other ways on this year’s tournament, up from 17.8 million in 2019.

Those include bets placed with casinos, racetracks, online betting apps and illegal bookmakers, or casually with a friend.

The survey was conducted on behalf of the AGA by Morning Consult between March 3-5 among a national sample of 2,200 adults. It has a margin of error of plus or minus 2 percentage points.

“I think it's going to be very heavily bet,” said Joe Asher, CEO of William Hill US. “Just look at how much betting is up as a general matter, and layer on top of that the fact that we didn't have it last year. There's unquestionably a lot of pent-up demand. In many ways it's a signal that America is coming back. Beyond the sports betting aspect, it flows into the whole COVID recovery story."

William Hill is active in 16 states plus Washington, D.C., up from just five states in 2019.

He said DraftKings “is seeing a considerable amount of action” on teams that bettors pick to win the entire tournament, as well as the Final Four teams, and the players to win the Wooden Award for outstanding men's and women's college basketball players.

“We are expecting a whirlwind of total overall action on this year’s tournament," Avello said. "College basketball handle has been up significantly this year, and I do not anticipate a deceleration, not now when we’re on the outset of one of the biggest sporting events of the year. Although the setup and configuration are going to be different from past years, I can usually gauge the interest from the conference tournaments. I am not disappointed from what I’ve observed thus far.”

New Jersey had hoped to repeal its ban on bets involving New Jersey college teams in time for this year's tournament. But a bill that would do so stalled in the state Legislature last fall.

The AGA's survey found that Gonzaga is the betting public’s favorite to win the tournament (17%), followed by Florida State (11%) and Baylor (8%).