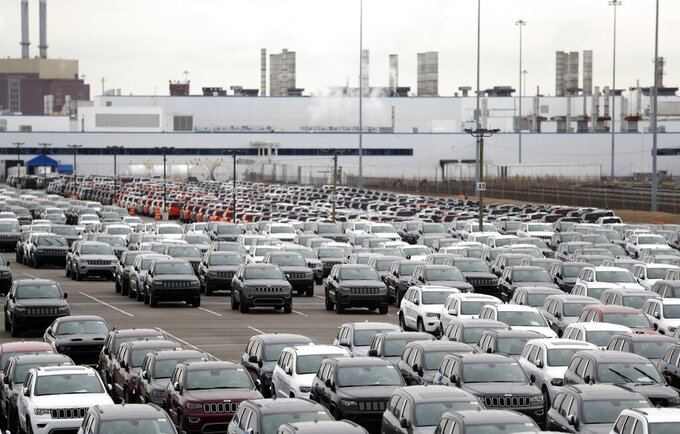 FILE - In this Feb. 26, 2019, file photo, Jeep vehicles are parked outside the Jefferson North Assembly Plant in Detroit. Fiat Chrysler is backing off a planned May 4 restart at its North American factories because some U.S. states still will have stay-home orders in place. The move likely means that factories of all three Detroit automakers will be idled for at least another two weeks as they negotiate reopening terms with the United Auto Workers union. (AP Photo/Carlos Osorio, File)

MILAN (AP) — Fiat Chrysler Automobiles on Tuesday reported a first-quarter net loss of 1.7 billion euros ($1.84 billion) due to a steep decline in car sales triggered by the coronavirus pandemic, and said the impact on the second-quarter would be even more severe.

The Italian-American carmaker has withdrawn full-year earnings forecasts due to the volatility of the economic crisis provoked the virus, which includes stalled production and shuttered dealerships. But it said that an internal stress-test indicates it could survive a 50% reduction in volumes by slashing costs and cash burn.

CEO Mike Manley told analysts that despite the crisis, the terms of a full merger deal with French carmaker PSA Peugeot had not been changed, and that the aim remains to complete it by the end of 2020 or early 2021.

The first-quarter loss compared with earnings of 619 million euros during the same period of 2019. Revenues sank 16% to 20.5 billion euros as global shipments slumped 21% to 818,000 with production suspended in all regions and global demand collapsing. Manley said the company expects a net loss and "significant’’ negative cash flows’’ in the second quarter.

"The pandemic and its impact is here for the foreseeable future, and it has caused us to rethink our entire business model,’’ Manley said. He said the recovery depended on what economic incentives governments devise.

“If the situation extends further than people expect, then clearly there will need to be interventions to support the industry,’’ Manley said. He added that could include infrastructure investments, general economic stimulus or cash-for-clunker schemes that were rolled out after the 2008-9 crisis to help ”kick-start" sales of vehicles that have already been produced.

Only North America posted a profit, with earnings before interest and taxes at 548 million euros. Plants there were closed for about a week in the quarter, and Manley said Fiat Chrysler aims to start reopening U.S. factories May 18, depending on the easing of government restrictions.

Fiat Chrysler said its available liquidity was 18.6 billion euros at the end of the first quarter, including 6.25 billion euros in a fully drawn revolving credit. The automaker has available another 3.5 billion euros bridge credit to help face the crisis. Cash flow from operating activities was down 364% to a negative 2.82 billion euros.

In Italy, Fiat Chrysler restarted production April 27 at its Sevel van-making plant in Italy, a joint venture with PSA Peugeot, which is running at 70% of normal capacity. A joint venture in China also has been restarted successfully, the company said.

Most plants in Europe will be reopened between late May and early July, with a focus on electric vehicles, specifically the new Fiat 500 and the Jeep Renegade and Jeep Compass plug-in hybrids. Maserati is to resume production in Turin by the end of May and in Modena in early July. Plants in Brazil and Argentina will be running by mid-May.

The carmaker plans to reduce capital spending by 1 billion euros this year, with key new car roll-outs delayed by about three months.

Manley said the China was the only example to draw from for the current crisis.

"The China market came back relatively more quickly than people had expected,’’ Manley said. Recovery in the U.S. and Europe would depend on how deeply sales collapse, and also vary according to market. Italy, one of Fiat’s key markets, has been significantly hit both by the health crisis and the economic crisis, with a forecast 10% drop in GDP and an 85-% decline in March car sales.

This version has been corrected to show Fiat Chrysler expects to reopen U.S. factories starting May 18, not May 19.