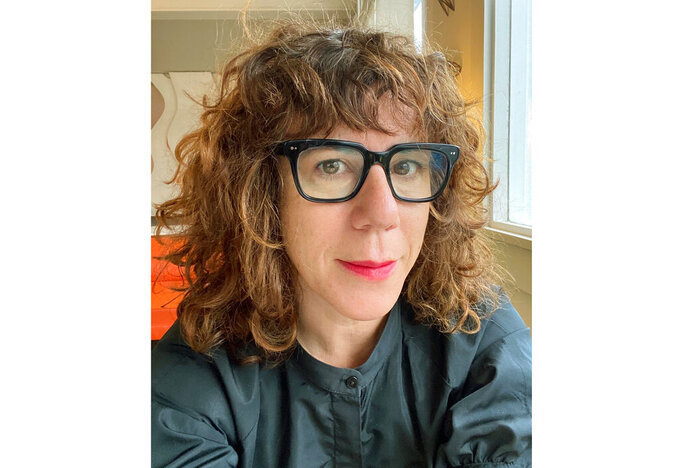 This image released by Ecco/HarperCollins shows author Jami Attenberg, founder of the 1,000 word challenge, calling for people to write 1,000 words a day for 14 days. The 2021 challenge began May 31 and ends Sunday. (Jami Attenberg via AP)

NEW YORK (AP) — A. Stella Oloye, a Washington, D.C-based writer working on an Afrofuturism novel, was at a low point this spring when she learned of an online challenge she likens to a “gift from God": #1000wordsofsummer.

The rules: Set down 1,000 words a day for 14 days. Fiction or nonfiction, poetry or dialogue, inspired or uninspired, for a future book or simply for the sake of writing.

“I was feeling really isolated plugging away, 2,000 words a day in the first quarter of the year, and had been looking for a writing community to stave off my lonely writer blues,” she told The Associated Press recently. “So when the 1,000 words of summer challenge crossed my (Twitter) timeline, I knew I had the opportunity to pair some much-needed community with targeted accountability to finish what I’ve started. I joined to combat the end-of-the-road fatigue I was experiencing.”

Organized and presided over by Jami Attenberg, #1000wordsofsummer has grown from around 2,000 participants in 2018 to more than 14,000 this year, drawing in emerging writers such as Oloye and such established authors as Attenberg, Roxane Gay and Deesha Philyaw.

Rachel Yoder wrote some of “Nightbitch,” a novel which comes out in July and has been optioned for a film starring Amy Adams, during a previous 1,000-word challenge. Attenberg herself worked on her memoir “I Came All This Way To Meet You: Writing Myself Home,” scheduled for release in January.

"One of the real reasons I started this, and persisted with it, is that writing gives me so much joy and I want that same joy for other people," Attenberg says.

Online writing events aren't new. The nonprofit organization NaNoWriMo has unofficially declared November to be National Novel Writing Month, with Sara Gruen's bestselling “Water for Elephants” among the books to come out of it. The internet also is home to author Rebecca Fyfe's ChaBooCha, which gives writers the month of March to complete an “early reader, chapter book, middle-grade book or YA novel,” and author Julie Hedlund's 12 x 12, for which participants attempt 12 picture books in 12 months and might see their names on a “Winner's Wall.”

Attenberg's project is more informal and open-ended, with no honors or promises, no kind of writing favored over another, and no specific goal beyond the number of words. The concept arose spontaneously three years ago. Attenberg and a fellow author based in New Orleans, Anne Gisleson, decided to start a writing “boot camp” for themselves, 1,000 words a day. Attenberg shared her idea on Twitter and Instagram, and friends and strangers alike wanted to be included.

“It was very organic and natural. I've learned that on social media you try not to force things. You just let people respond to things rather than force things to happen,” says Attenberg, whose other books include the bestselling novels “The Middlesteins” and “All Grown Up."

Attenberg offers encouragement on her Craft Talk newsletter ( https://1000wordsofsummer.substack.com ), and has brought in Celeste Ng and Lauren Groff among others to share advice. One of this year's contributors is Rumaan Alam, whose novel “Leave the World Behind” was a National Book Award finalist in 2020.

“Advice about writing is mostly pretty awful, but a long time ago, another writer said something to me, really an aside, a stray thought, that has stuck with me, as advice about writing, or maybe advice about life itself. ‘No one is ever going to ask you to write a book,’ she said, and she’d know, having published three at that point," Alam writes.

“Take the ‘book’ out of it; no one will ask you to write, full stop. It’s up to you. You probably already knew that, which is why you’re trying to produce 1,000 words a day right now.”

Participants follow different paths to 1,000 and have different reasons for trying. Nicole Stellon O’Donnell is primarily a poet, but also writes “little bricks of prose” to reach her quota, and when finished looks for lines she can use for standalone poems.

Fiction writer Dantiel Moniz struggled to set down any words in 2020, whether because of the pandemic or stress over the presidential election. The writing challenge has helped assure her she can still “remember how to do it, and it was so nice and exciting.”

Philyaw, whose debut story collection, “The Secret Lives of Church Ladies,” recently won the PEN/Faulkner prize for fiction, welcomed the 1,000-word challenge as a way of focusing on a planned novel. Yoder worked on “Nightbitch” for the 2018 challenge, when she had recently become a parent, and found the experience “really good for generating material” and "just the right amount of pressure."

Cheryl Strayed, best known for her memoir “Wild,” joined this year after initially being a “cheerleader” and “observer on the sidelines." She is writing another memoir, and credits the summer challenge with helping her recall details from her teens, when she had a summer job working in the woods in her native Minnesota.

“I knew it was there in my memory, and it came up in the course of my writing and suddenly it was fertile. Who knows if it would have come to the surface if I hadn't started this thousand-word thing?” Strayed said.

“1000wordsofsummer” isn't just a path to discovery or a test of dedication, but a way for writers to find each other. Thousands have joined a Slack channel started by Attenberg and many set up subgroups; Oloye's is #queerblackwritersroom. Philyaw said the writing challenge gave her a feeling of “community” and likened it to the Zoom conversations she had during the pandemic.

On social media, participants share stories of joy, frustration and determination, including a tweet from author-journalist Leslie Streeter: “I just wrote a @LinkedIn post and a newsletter, bringing me to an additional 701 words, or 1896 words total today with what I did on my novel. Motivation. She’s a banger.”

More information on the challenge can be found on https://1000wordsofsummer.substack.com/about