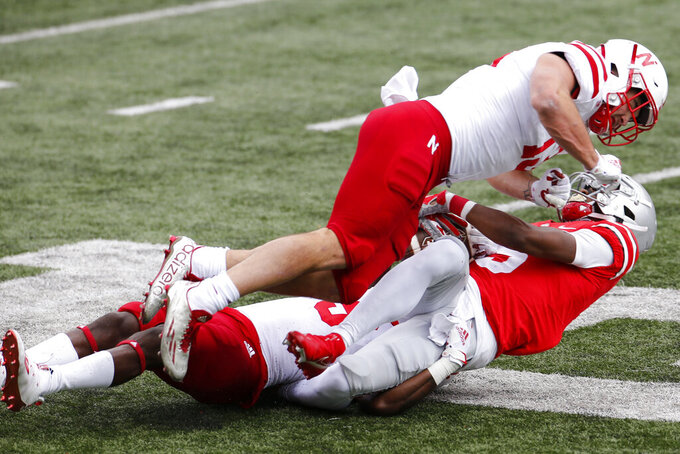 COLUMBUS, Ohio (AP) — Justin Fields and No. 5 Ohio State shook off the rust in the first half and then buried Nebraska the rest of the way.

Fields completed 20 of 21 passes for two touchdowns and ran for another, Master Teague III rushed for a pair of scores and the Buckeyes rolled over Nebraska 52-17 Saturday in the Big Ten teams’ pandemic-delayed opener.

Fields, a Heisman Trophy finalist last season, completed his first 12 passes and threw for 276 yards. He ran for another 52 — including a stunning 17-yard third-quarter touchdown scramble around the left side that saw him spin past a defender and into the end zone.

His 42-yard touchdown pass to slot receiver Garrett Wilson on Ohio State's second drive of the game couldn't have been prettier. The only pass he missed on, in the second quarter, may have been catchable, but Chris Olave couldn't hold on in the end zone.

Olave caught six passes for 104 yards, and Wilson had seven for 129.

The Ohio State defense took most of the first half to figure out a way to contain quarterback Adrian Martinez, who marched the Huskers down for a touchdown in the opening 2 minutes of the game.

Nebraska tied it at 14 in the second quarter, but an Ohio State field goal, a defensive stop and Teague's second TD run gave the Buckeyes a 24-14 lead at the half. Then came Fields' nifty touchdown run and a 55-yard scoop and score by Buckeyes cornerback Sevyn Banks, and Ohio State had it under control.

“That's one heck of a run right there," Ohio State coach Ryan Day said. “It's the best way you can end a half and start a half, and I thought it flipped the game.”

Nebraska: Effective against the Ohio State defense to start the game, the Huskers couldn't keep up. But Martinez showed flashes of his excellent freshman season in 2018, rushing for 88 yards and a touchdown.

“The first half I thought we did a pretty good job,” Martinez said. “We came out aggressive, and I think we continued to do that in the second half but made mistakes that we can’t make against a really good team in Ohio State. ”

Ohio State: Once they got going, Fields made good decisions and Buckeyes receivers were terrific. The defense gave up some chunk plays that kept Nebraska in the game early but tightened up.

Now that voters have finally gotten a look at the stacked Buckeyes, there could be some more love on the way.

Day said he would text Nebraska coach Scott Frost to apologize for the last touchdown, which came on freshman quarterback Jack Miller III’s 2-yard run with 18 seconds left and the Buckeyes leading by 28 points.

“At the end of the game, if I could do that again, I would have taken a knee,” Day said. “I feel bad about that at the end of the game. I had a younger quarterback in the game and didn’t feel like we had the personnel to take the knee, and I probably should have done that. I just want to publicly apologize for that to Scott.”

If there was a concern offensively for Ohio State, it was the inability to get running backs to the second level for significant gains. Oklahoma transfer Trey Sermon was the leading rusher with just 55 yards, although Teague got the touchdown carries, scoring from 1 yard and 6 yards.

Olave went out after a hard hit in the third quarter and did not return. Day didn't have any information on his condition after the game.

Ohio State athletic director Gene Smith predicted a “weird” atmosphere in Ohio Stadium, and he wasn't kidding. Because of coronavirus restrictions, there were just 1,344 people in the 105,000-capacity venue, counting staff and media. Family and friends of players and coaches were spread out in the lower deck. Even with 4,700 cutouts the place looked empty. No cheerleaders, no marching band and no “script Ohio,” which has been tradition at home games for 84 years. It is believed to be the smallest crowd to watch an Ohio State game since sometime before 1910.

Ohio State: Faces No. 8 Penn State on the road.