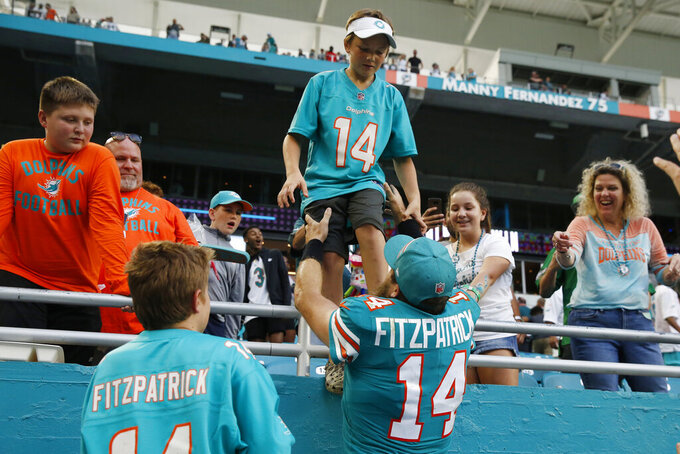 FILE - In this Dec. 1, 2019, file photo, Miami Dolphins quarterback Ryan Fitzpatrick (14) grabs his kids at the end of the second half at an NFL football game again st the Philadelphia Eagles in Miami Gardens, Fla. Ryan Fitzpatrick is spending his coronavirus lockdown in Arizona with his wife and seven children, and hoping to get a chance soon to begin mentoring first-round draft pick Tua Tagovailoa.(AP Photo/Brynn Anderson, File)

He has seven. And despite the pandemic lockdown, there are often enough youngsters gathered for the Fitzpatrick family to field a football team.

"My brother lives next door, and he has five kids. That’s 12 every day running around," Fitzpatrick said from his home in Arizona. “It has been a little bit crazy.”

This will be Fitzpatrick's 15th NFL offseason, and none has been like this. Normally he'd be taking part in spring workouts at the team complex, but because of the coronavirus, training sessions are conducted via Zoom.

Two things haven't changed. Fitzpatrick's beard still ranks among the best in sports, even with barbershops closed because of the pandemic. And he faces a battle for playing time whenever training camp starts.

The journeyman had one of his best seasons in 2019, leading a turnaround from an 0-7 start to a 5-11 finish. At age 37, he was voted the Dolphins' most valuable player.

They nonetheless used their top draft pick on a quarterback, and if things go as the Dolphins hope, Tua Tagovailoa will supplant Fitzpatrick as the starter this year. They're in the midst of a rebuilding project, with Fitzpatrick the only player on the roster in his 30s.

But he's long accustomed to job insecurity. Even last year he was demoted to No. 2 behind Josh Rosen for a three-game stretch early in the season.

And he embraces the role of mentoring Tagovailoa, regardless of who's No. 1.

“I've been in this situation before a little bit,” Fitzpatrick said. “I'm excited for him to be here. I loved watching him play in college. He's going to be an awesome addition to the team for a long time. I'm going to do the best I can to help him."

Make no mistake, though: Fitzpatrick hopes Tagovailoa spends his rookie season on the bench.

“I’m as competitive as they come,” Fitzpatrick said. “I want to start. I know there are a lot of forces that go into it. Whether it happens or not, who knows?”

“That's big, drafting Tua,” Godchaux said. "Coach Flo is always going to look to create competition. That’s what elevates your team to the next level. By him doing things like that, the sky’s the limit for our team in the future."

The pandemic, however, has slowed offseason momentum. The Dolphins signed 11 free agents and drafted 12 rookies, but holdovers like Fitzpatrick have yet to meet the newcomers.

“It’s difficult not being there,” he said. “There are going to be a lot of new faces, a lot of youth. You want to get on the field and start practicing and learning the system and each other.”

Fitzpatrick's also eager to start working again with new offensive coordinator Chan Gailey. They spent five seasons together with the Bills and Jets.

From a personal standpoint, Fitzpatrick sees one bright side to the pandemic.

“It actually has been a good time to get away from everything else and reconnect with family and enjoy each other -- breakfast, lunch and dinner together,” he said. “We haven't left the house a whole lot. It has been good for us in the sense we’ve gotten to spend a lot of quality time together.”