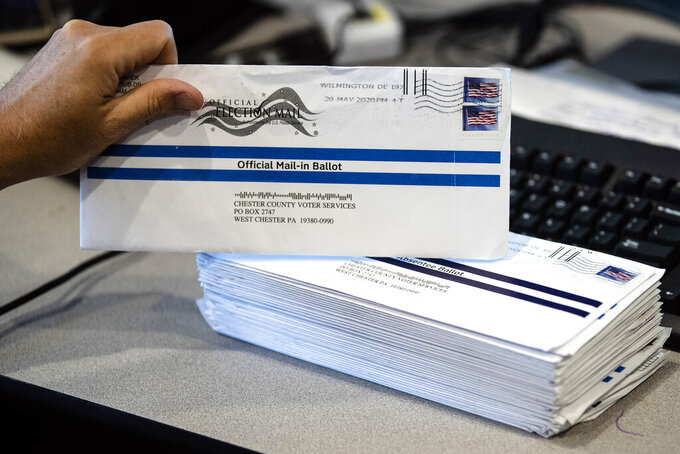 FILE - In this May 28, 2020, file photo, mail-in primary election ballots are processed at the Chester County Voter Services office in West Chester, Pa. Pennsylvania officials said Friday, July 31, 2020, the state will foot the cost of postage for voters to mail in ballots in November's general election, a move that Gov. Tom Wolf has made a priority as the coronavirus pandemic unexpectedly fueled high interest in voting by mail under a new state law. (AP Photo/Matt Rourke, File)

HARRISBURG, Pa. (AP) — With barely three weeks to go before counties can begin mailing out ballots, lawsuits are filling the vacuum of action to fix problems or ambiguities with Pennsylvania's mail-in voting laws after a primary election that saw record-smashing numbers of mailed-in votes amid the coronavirus pandemic.

Closed-door talks between Gov. Tom Wolf's administration and lawmakers are showing little signs of wrapping up and, if anything, more signs of disagreement than agreement are emerging in the shadow of a high-stakes presidential campaign in the battleground state.

The list of wants is long and there are a lot of parties involved, President Donald Trump's campaign, which filed a lawsuit in federal court seeking in part to outlaw the use of drop boxes for mail-in ballots in Pennsylvania's election in November.

“There’s a lot of gorillas in the room, but I think the biggest gorilla is to get our arms around pre-processing ballots before Election Day,” Rep. Garth Everett, R-Lycoming, who chairs the committee that handles election issues, said in an interview.

The talks come against the backdrop of U.S. Postal Service warnings that it cannot guarantee mailed ballots will arrive on time to meet the narrow time frames Pennsylvania and many other states allow to request and return those ballots.

Still, Republican lawmakers, who control the Pennsylvania's House and Senate majorities, are generally unwilling to discuss the specifics of negotiations or to sign on to changes sought by Wolf, a Democrat, and his allies in the Legislature.

Nothing will pass without a bipartisan compromise, and lawmakers pin the first week of September as the latest that something should pass, to give counties time to work it into their plans for the Nov. 3 election — when more than 6 million Pennsylvanians are expected to vote.

Senate Minority Leader Jay Costa, D-Allegheny, said talks are slow, as lawmakers wait to see if the courts will clear up issues where Republicans and Democrats disagree.

“What I think the court cases do is really narrow the issues that we have to address going forward,” Costa said in an interview.

The June 2 primary was a test-run for Pennsylvania's new mail-in voting law, which passed at a prescient time: months before the pandemic fueled interest in voting by mail and avoiding picking up the virus while voting in person.

As a result, nearly 1.5 million ballots — slightly more than half the total in the June 2 primary — were cast by mail, creating a huge new challenge for county election offices and dragging out vote-counting.

That prompted counties to renew a request that Republican lawmakers had opposed previously: allow them to process mailed-in ballots before Election Day to speed up counting.

Wolf wants that to start 21 days before Election Day. Republicans are unlikely to sign on to 21 days, but may allow some sort of early processing of ballots.

“Speaking for myself, when the counties call you and say they're concerned, I think it’s right for us to take up that concern and see how we can alleviate it,” Senate Majority Leader Jake Corman, R-Centre, said in an interview.

In court, Wolf’s administration cited the U.S. Postal Service's warning about its delivery times when it asked the state Supreme Court last week to extend deadlines for mail-in and absentee ballots to arrive to three days after the election.

The court has a 5-2 Democratic majority and may be friendly to the governor's overtures.

Most states make Election Day the deadline, but 18 states — about half of which backed Trump in the 2016 election — have a post-Election Day deadline.

Still, Republican lawmakers show little interest in agreeing to it.

Meanwhile, Trump's campaign is asking a federal judge that the Republican president appointed to outlaw drop boxes — used by Philadelphia and its heavily populated suburbs in the primary to help receive an avalanche of mailed-in ballots — and to bar mailed-in ballots from being counted if they are returned without a secrecy envelope.

Conversely, Wolf's administration asked the state Supreme Court earlier this week to take up a countersuit filed by the state Democratic Party to ensure that counties can use satellite election offices and drop boxes and to require them to count mailed-in ballots that lack a secrecy envelope.

Philadelphia and its four suburban counties — where Trump lost badly in 2016, despite winning Pennsylvania narrowly — are planning this fall to again use drop boxes or satellite election offices, or both, to help receive mail-in votes, despite contentions by Republican lawmakers that state law does not explicitly allow either.