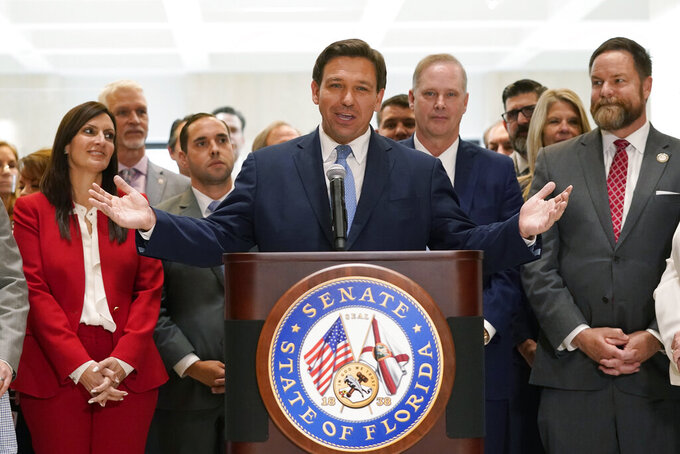 Surrounded by lawmakers, Florida Gov.Ron DeSantis speaks at the end of a legislative session, Friday, April 30, 2021, at the Capitol in Tallahassee, Fla. (AP Photo/Wilfredo Lee)

At a live bill-signing event aired exclusively on Fox News, DeSantis said the new law would prevent fraud and restore confidence in Florida's elections — although the state has found no evidence of widespread fraud. The move made Florida the latest GOP-led state to enact tighter voting rules over the objections of Democratic critics who charge the law only makes it harder for people, particularly the elderly and people of color, to vote.

But DeSantis' unusual promotion of the bill — on the GOP-friendly morning show Fox & Friends — demonstrated the rising Republican leader's confidence the new law would only boost his standing.

“Right now I have what we think is the strongest election integrity measures in the country,” the governor said.

Florida's new law restricts when ballot drop boxes can be used, and who can collect ballots — and how many. It mandates that drop boxes must be guarded, and available only when elections offices and early voting sites are open. To protect against what Republicans call “ballot harvesting,” someone can only collect and return the ballots of immediate family, and no more than two from unrelated people.

“I’m actually going to sign it right here," DeSantis said as he signed a piece of paper live on television.

A spokesperson for the governor, Taryn Fenske, said later that DeSantis did not sign the actual bill on camera and that the event was purely ceremonial. No other media outlets were advised of the bill signing or allowed in.

Even Fox News appeared taken aback by the stunt. It later issued a statement saying it had booked DeSantis’ appearance on its program “as an interview and not as a live bill signing. Neither the network, nor the show, requested or mandated the event be exclusive to Fox News Media entities.”

Fox News is clearly the network of choice for Republican politicians, as Donald Trump illustrated time and again during his presidency, but staging a semi-official event for Fox’s cameras is highly unusual.

Still, it wasn't the first time the governor, who is up for reelection next year and is widely viewed as a potential presidential candidate in 2024, has used Fox for photo ops before.

In January, the governor found himself backtracking after a Fox appearance in which he claimed that a 100-year-old World War II veteran he invited with him would be the 1 millionth senior in his state to get a COVID-19 vaccine shot in the arm. In fact, it took several more days for the state to hit that milestone. DeSantis' office later said the event was meant to be symbolic of the achievement.

On Thursday, the governor did not acknowledge the theatrics. He celebrated “a wonderful bill signing for this great elections bill" that “millions” could watch, including Floridians.

DeSantis' critics pounced. Democratic U.S. Rep. Charlie Crist, a former Florida governor who announced this week that he is seeking to challenge DeSantis, tweeted, “This is the difference between @GovRonDeSantis and me. He locks out the public and caters to Fox News. When I was Governor, everyone was invited in — Democrats, Republicans, and Independents. And when I’m Governor again, this will be a Florida for all.”

“He is using Fox News as a state news source," she said during her own news conference.

In recent months, DeSantis has tried to burnish his credentials with his party's base. He pushed through an “anti-riot” bill, which he signed last month, that was clearly aimed at the Black Lives Matter movement that roiled the country over the summer. He is also expected to soon sign into law a measure that would punish social media companies that, he claims, censor conservatives.

The elections law clearly plays into that strategy.

It’s the latest victory in the nationwide push by Republicans to restrict access to the polls, which party leaders say is necessary to deter fraud. The campaign has been fueled by former President Donald Trump’s false claim that his reelection was stolen from him, an assertion widely repeated across the GOP. Florida’s Republican legislators passed this law — without a single Democratic vote.

Voter advocates assailed the elections law as a blatant attempt to impede access to the polls so Republicans might retain an advantage.

“The legislation has a deliberate and disproportionate impact on elderly voters, voters with disabilities, students and communities of color. It’s a despicable attempt by a one party ruled legislature to choose who can vote in our state and who cannot. It’s undemocratic, unconstitutional, and un-American,” said Patricia Brigham, president of the League of Women Voters of Florida.

The league joined the Black Voters Matter Fund, the Florida Alliance for Retired Americans and others in assailing the new law in a federal lawsuit filed minutes after the signing. A separate federal suit filed in Tallahassee by the NAACP and Common Cause also says the law targets people who are Black, Latino or disabled.

“For far too long, Florida’s lawmakers and elected officials have created a vast array of hurdles that have made it more difficult for these and other voters to make their voices heard,” these groups said.