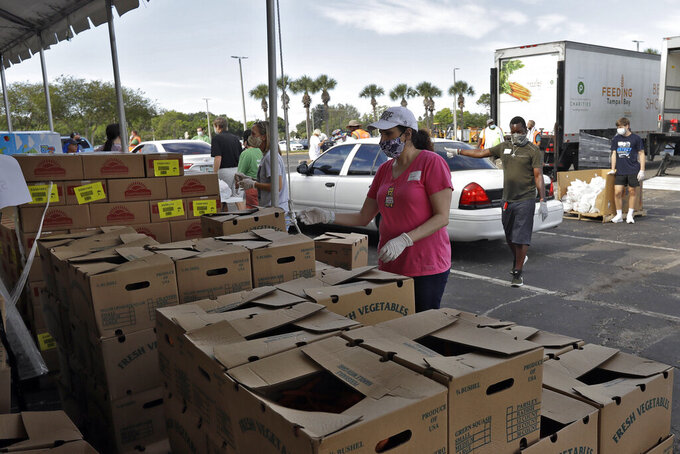 Volunteers for Feeding Tampa Bay and other groups distribute food to the needy at the Hillsborough Community College Saturday, May 9, 2020, in Tampa, Fla. The Mega Food Pantry intends to give out more than 3,500 meals to the public struggling from the effects of the coronavirus. (AP Photo/Chris O'Meara)

FORT LAUDERDALE, Fla. (AP) — More than 650 patients have died at Florida's nursing homes and assisted living facilities from the new coronavirus, including 22 at a facility near St. Petersburg, state data shows.

Florida Department of Health figures released late Friday night show that 656 patients, eight employees and one person of unknown status have died at the state's nursing homes and assisted living facilities with 14 reporting at least 10 deaths and 183 reporting at least one.

That means nursing homes and ALFs account for almost 40% of the state's 1,715 confirmed deaths from COVID-19. The state has now had more than 40,000 confirmed cases since reporting its first two months ago. People over 65 and those with underlying health conditions are particularly endangered by the disease, making nursing homes especially vulnerable to outbreaks.

According to the Florida Health Care Association, a trade group, there are 700 nursing homes and 3,100 ALFs in the state caring for 155,000 people. The facilities employ 200,000 people.

Gov. Ron DeSantis almost two months ago banned nursing home visitations and the state has encouraged but not required homes to screen employees when they report to work. When a nursing home is found to have an outbreak, the state sends a health department team to work with the staff. The governor has also sent National Guard teams to nursing homes around the state to test employees and patients for the virus.

Seminole Pavilion Rehabilitation & Nursing Services, a 120-bed, for-profit facility in the St. Petersburg suburb of Seminole, has had 22 patients and one worker die, according to the state. That's five more fatalities than any other Florida facility. It is part of Freedom Square Seminole, a sprawling retirement community that is owned by Life Care Services, an Iowa firm that owns about 140 senior communities nationwide.

A staff member at the Seminole home said no one was available Saturday to answer questions about the deaths. A message left Saturday at Life Care Services' corporate office in Des Moines was not returned.

Kristen Knapp, a spokeswoman for the state health care association, said recently that nursing home patients who test positive but don't have symptoms are generally treated at their home facility in cordoned off areas. Those with symptoms are hospitalized.

She said when the outbreak started in March, homes had difficulties getting enough tests to screen patients and enough protective equipment for their doctors, nurses and other staff members. She said because the state has given nursing homes and ALFs priority for those supplies, the situation has improved.