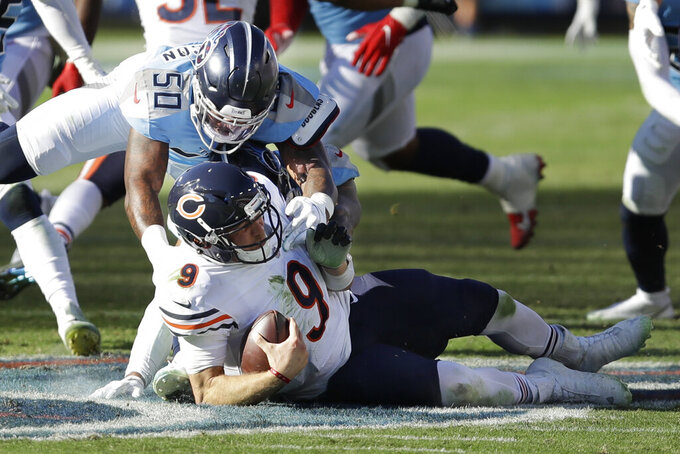 CHICAGO (AP) — Nick Foles remembered the stadium rocking to Philadelphia rapper Meek Mill’s “Dreams and Nightmares” as the Eagles prepared to host the Minnesota Vikings in the 2018 NFC championship game.

It's something he'll never forget.

“It’ll always be a special moment in my life just being right there, taking a moment, looking at my teammates, looking at my coaches and taking a step back from the game of football and realizing it’s more than a game,” he said Thursday. “It’s about the people you do it with. That’s what I remember. And then obviously the energy was then transferred to the field and it was just an explosion on the field and it was a good night.”

Foles threw for three touchdowns in a 38-7 romp, then took Super Bowl 52 MVP honors as Philadelphia beat Tom Brady and the New England Patriots to capture the championship. On Monday night, he'll face Minnesota for the first time since that conference final when the Chicago Bears host the Vikings.

Plenty has changed for Foles since then, most notably his address.

He left Philadelphia to sign an $88 million contract with Jacksonville in 2019 and lost his starting spot to Gardner Minshew in an injury-filled season. The Bears then acquired him in a trade to compete for the starting job with Mitchell Trubisky.

Foles got handed the keys during a Week 3 comeback win at Atlanta. But the Bears (5-4) are stalling with three straight losses, looking more like a fading team than a playoff contender.

Their offense continues to rank among the NFL's worst, and Foles isn't providing the lift they hoped he would, considering his ties to coach Matt Nagy and several assistants.

Foles didn’t have the benefit of working as much as he would have had with his new team in the offseason. The COVID-19 pandemic wiped out workouts as well as preseason games, putting him at a disadvantage even though he knew the system.

“He has strong convictions on what we’re trying to do offensively," quarterbacks coach John DeFilippo said. "He’s been in a similar — no system is the exact system — but a very similar system before, a certain number of times. And knows the time it takes when there’s a lot of new pieces in there for things to mesh and he understands that.”

In seven games and six starts, he has almost as many interceptions (seven) as touchdowns (10). He has 1,746 yards and a 65.6 percent completion rate. And he and Nagy haven't always appeared to be on the same page despite their time together in Philadelphia and Kansas City.

“Honestly a lot of times it’s grinding through trials and going through moments like this where it seems like at times there’s a wall and it becomes difficult,” Foles said. “But you continue to push through it day by day and doing the little things right, and you keep working through it and you do it with one another, and then something is created throughout it.”

Foles acknowledged his frustration with the way the Bears are performing. He said his wife Tori helps keep him in check, gives him a kick “right in the butt” when he needs one.

The Bears' issues extend beyond the quarterback. Their only consistent playmaker is receiver Allen Robinson, and their short-handed line wasn't providing the protection they need even when it was mostly intact.

There are all sorts of reasons why the Bears rank 29th in the NFL in yards per game and scoring (19.8) and last in rushing. They have more offensive penalties (63) than any other team.

“We’ve all been on a bunch of different teams in our careers,” Nagy said. "We’ve been around a lot of different people who have different personalities and handle adversity certain ways, and when you go through times like this, not just as an offense but as a team, you really, really depend on one another in these times. And I think staying positive, you guys know that’s one of Nick’s strengths and that’s what we’re all doing around here right now.”

NOTE: Nagy said he has “no idea” if C Cody Whitehair has experienced COVID-19 symptoms after testing positive last week. “That’s not something that I need to get into (with the medical staff),” Nagy said. Whitehair has also been sidelined the past two games after injuring his calf against the Los Angeles Rams on Oct. 26.