On Football: Getting to January a major challenge for NFL 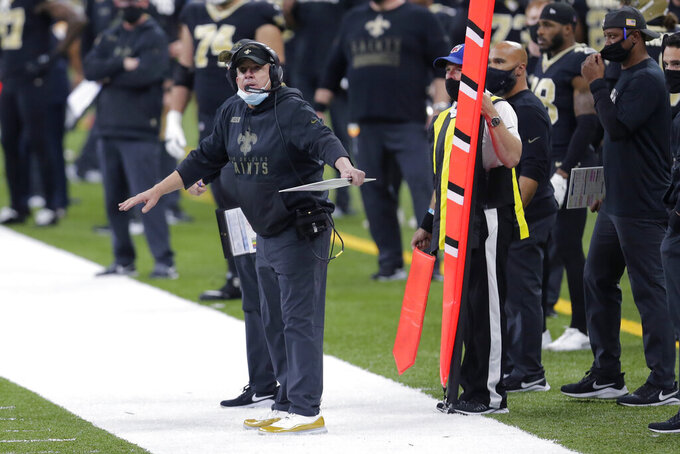 FILE - In this Sunday, Nov. 22, 2020 file photo, New Orleans Saints head coach Sean Payton reacts on the sideline in the first half of an NFL football game against the Atlanta Falcons in New Orleans. The NFL has fined the New Orleans Saints $500,000 and stripped them of a 2021 seventh-round draft pick for violating league COVID-19 protocols, a person with direct knowledge of the discipline told The Associated Press on Sunday, Nov. 29. New Orleans was fined as a repeat offender; Payton previously was docked $150,000 and the team $250,000 because the head coach failed to properly wear a face covering against the Raiders in Week 2. (AP Photo/Brett Duke, File)

In every NFL season, there are losing teams who hit December and just want to get to January, get the schedule done and go home.

In 2020, it's all about the league itself getting to January during a pandemic that daily is becoming harder to deal with.

If Week 12 is a harbinger, NFL executives will be doing more scrambling than Lamar Jackson and Kyler Murray. They've already twice postponed the Thanksgiving night showcase game between Baltimore and Pittsburgh, and it's still in jeopardy for Tuesday night with more than 20 Ravens on the COVID-19 list. Denver, thanks to protocol violations by its quarterbacks, started an undrafted rookie wide receiver at the critical position and, unsurprisingly, barely moved the ball.

There also were hefty fines to the Saints and Patriots for not being as diligent about the coronavirus protocols as they need to be.

The NFL deserves praise for getting this far with minimal disruptions compared to what we are seeing in the college game. Yet there is a foreboding environment right now.

Teams have been ordered to steer clear of their facilities on Monday and Tuesday as the pandemic rages across the country. Pro football tries to soldier on, but for how long?

“I think we have to really consider a bubble,” says Bill Cowher, the Hall of Fame-bound coach and now a CBS Sports analyst. "When you think about the country right now, we’re going through a second wave. You have to be flexible in your thinking.

“I think right now from a competitive and balance standpoint that’s out there, and from a safety standpoint that’s out there, go to a bubble. Go to a city right now, identify a hotel, take all the staff members, put them in there, and make sure from that point they bus to and from practice. They fly to and from games. It worked in hockey. It worked in basketball. I think the time is now. Protect the integrity of the game. It’s the fairest thing to do. And it’s the safest thing to do.”

In some ways it also is the most difficult thing to do. Don't think that the NFL hasn't discussed the bubble idea, though it has concentrated on creating one or more for the playoffs. Doing so for the final six weeks of the schedule, it's a logistical challenge tantamount to scoring on the 1985 Bears or 2000 Ravens.

As the number of COVID-19 cases rises across the league, the potential for more postponements — even cancellations or forfeits, neither of which the NFL truly wants to ponder — also rises.

One option that seems more logical by the day is for the league to create a Week 18 for the second weekend in January. With outbreaks within teams a higher likelihood than ever — and having a week to play with because the bye between the conference championships and the Super Bowl could be eliminated — instituting a Week 18 has its merits.

Certainly it would lessen the chance of mismatches such as what happened Sunday in Denver, a 31-3 Saints romp that never was in doubt; is that the way NFL games should be? And it could help avoid what could be a similar lopsided contest in Pittsburgh on Tuesday night, should that game be played.

“I don’t think weird is the right word,” said Saints coach Sean Payton, whose team was fined $500,000 and docked a seventh-round draft pick for repeatedly defying NFL protocols. "Look, everything about this season’s unusual. So, we kind of tune out the things we can’t control. ... And then what it is we can control? And let’s find a way to get our next W.”

Do coaches really want that next W, or next L, to come because they or their opponent is severely undermanned due to the invisible enemy that is the coronavirus? If so, that's as cold as Lambeau Field in the midst of winter.

“As you see, we said it from the beginning, we are kind of susceptible to what the country and what our local communities are going through,” he said. "We are seeing huge spikes in cases around the country, which just increases the likelihood of cases coming from the outside into the building. That is what you are seeing is, as the cases around the country have spiked, so have our cases. Our cases having gone up league-wide, and that is why the protocols are so important about keeping the season going and keeping guys healthy and not allowing that virus to spread once it gets into the building.”

There are five more weeks of trying to do so, and recent results have been distressing.