On Football: Injury blitz troubling so early in NFL season 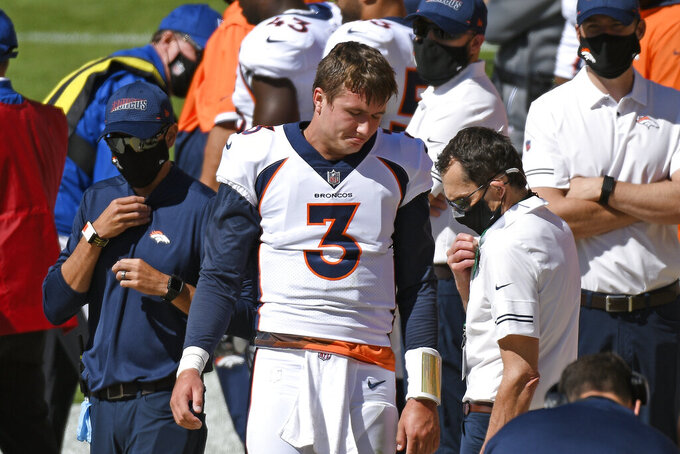 Denver Broncos quarterback Drew Lock (3) stands on the sideline after being injured during the first half of an NFL football game against the Pittsburgh Steelers in Pittsburgh, Sunday, Sept. 20, 2020. (AP Photo/Don Wright)

Coaches, players and team executives don't exactly shrug when major injuries occur on an NFL field. They don't bury their heads in the turf about it, and they certainly don't wave a white flag in surrender.

Usually, they label a slew of injuries as part of a collision sport. Even when the names are so recognizable — on Sunday there were Nick Bosa and Saquon Barkley, both recent winners of top rookie awards; All-Pro Christian McCaffrey, perhaps the NFL's most versatile player — there's little attempt to reason with something so out of a team's control.

Except 2020 is presenting a myriad of challenges that, in part, have led to such a spike in guys getting hurt.

Nearly 140 players have been placed on injured reserve, though that's not a fair comparison to recent seasons when there was no coronavirus pandemic; a stint on IR didn't last only three weeks because of adjustments caused by COVID-19; and there were offseason programs, minicamps, training camp and preseason games.

Regardless, it's worrisome. And then throw in previous problems that have landed the likes of Von Miller, Danielle Hunter, Richard Sherman, Le'Veon Bell, Mike Pouncey, Derwin James, Marlon Mack and Anthony Barr on IR.

“It is never good to see injuries. You never wish that upon anybody," Browns quarterback Baker Mayfield says. "You never want that for anyone around the league — division rivals or anything like that, it does not matter. You want these guys to be healthy. It was pretty sad to see all that going on. All you can do is pray and hope for speedy recoveries and just hope for the best for those guys.

“Not having the preseason games, I think, your body is not used to getting hit, and also, just being on the field. You can say that is why and I think that might have helped be the reasoning for some of that, but I do not have the answer for that.”

No one has the answer. But it's not ludicrous to surmise that the pandemic has led to unique situations on and off the field.

“I do think it’s true that the best way to get into football shape is to play football,” Ravens coach John Harbaugh says. “All the other stuff is helpful. The ramping up and those kind of things, and conditioning is really important, but the offseason program, the OTAs, the training camp, even the (preseason) games, are valuable and help guys move in ways that they learn to protect themselves and just get ready to play football.”

Lots of players whose names fans — and even some opponents — won't recognize will be moving toward the forefront as replacements for stars and starters. That happens every season, though the volume through two weeks is menacing for the remainder of the schedule.

Eventually that is likely to impact the product, which has been relatively good considering expectations heading into the season. That's especially true if quarterbacks go down the way linemen on both sides of the ball have so far. For now, only San Francisco's Jimmy Garoppolo and Denver's Drew Lock have been injured in action, and neither should be out too long.

That players were on their own out of necessity to handle their conditioning, diet and workouts from March until late July also contributes to the number of injuries.

“I think anytime you’re not in a competitive offseason program, then you’re going to be battling uphill a little bit," Cowboys COO Stephen Jones says. “And obviously our guys didn’t get that. They were being monitored well, but when you’re not in there in your own organization’s weight room, when you’re not competing against one another to get stronger, to get faster, to improve on your trade, then I think it’s lacking a little.”

And then teams went from a shortened preseason with little contact to full-out aggression, as Giants coach Joe Judge notes.

“Again, no one’s had the opportunity to be through any type of full game until Week 1, Judge says. ”There’s a cumulative effect that happens with your body, it’s just natural. The shock your body goes through coming out of any game, it takes a couple days to recover anyway. If you haven’t been through that kind of stress and physical demand, it takes a little bit longer to recover."

One lesson players have learned is, as Packers cornerback Kevin King notes, “if you go out there playing timid or really, really worry about getting hurt, that’s when things happen.”

“Who knows if the things that happened this spring is a correlation to what’s happening now,” says Packers guard Elgton Jenkins. “At the end of the day, it’s football. It’s a contact sport. Just going out there and play football. Don’t try to play to not get injured.”