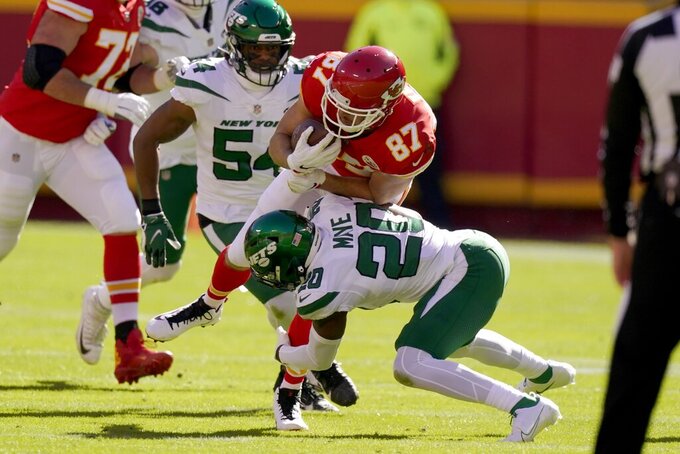 Kansas City Chiefs tight end Travis Kelce (87) breaks through tackle attempts by New York Jets' Avery Williamson (54) and Marcus Maye (20) as Kelce catches a pass for a first down in the first half of an NFL football game on Sunday, Nov. 1, 2020, in Kansas City, Mo. (AP Photo/Charlie Riedel)

PITTSBURGH (AP) — Avery Williamson left quite the impression on Pittsburgh Steelers coach Mike Tomlin when they crossed paths more than five years ago.

Tomlin was at the University of Kentucky Pro Day to scout outside linebacker Bud Dupree, who eventually became Pittsburgh's first-round pick in the 2015 draft. Still, there was something about Williamson that Tomlin couldn't shake.

“We kind of gravitated toward one another,” Tomlin said Tuesday, a day after the Steelers acquired Williamson from the New York Jets. “His passion for football comes through in general conversation. He’s a football lover. He’s a football junkie, if you will.”

One Tomlin believes will help the NFL's last undefeated team shore up some of the cracks in a run defense that was gashed for 265 yards in Sunday's 28-24 win over Baltimore that pushed the Steelers to 7-0 for the second time in franchise history.

Williamson's arrival also gives the Steelers experienced depth at a position that is hurting with Devin Bush out for the year with a torn ACL in his knee and backup Ulysses Gilbert dealing with a lingering back issue.

Robert Spillane had a pick-6 in his second NFL start but also spent a considerable portion of the afternoon getting pushed around, though he was hardly alone on a day in which the Ravens repeatedly gashed the league's second-ranked run defense. It's an area Tomlin knows his club needs to address starting this Sunday against Ezekiel Elliott and the reeling Cowboys (2-6).

“We bled and bled badly in the run (against Baltimore),” Tomlin said. “We better work with some urgency and an edge in that regard. I have a lot of respect for Ezekiel Elliott. He’s an elite, elite running back, arguably the best in the business. His vision, his balance, his power on contact. ... This guy is as good as advertised. We have our hands full there.”

It's unlikely Williamson will be available to face the Cowboys because of COVID-19 protocols, but Tomlin believes Williamson will make an immediate impact whenever he debuts.

“We have a vision of him, being a third inside linebacker, a guy that’s position flexible, a guy that is capable of supporting Robert and Vince (Williams) and being available if anything should happen to either,” Tomlin said.

Still, Tomlin is hopeful the defensive front seven won't be completely short-handed. Tomlin is optimistic defensive tackle and longtime captain Cam Heyward will be ready to go after he limped off the field twice in the fourth quarter last Sunday with a quad injury.

Defensive lineman Tyson Alualu, however, is likely out with a knee problem. That leaves Isaiah Buggs, Henry Mondeaux and perhaps even rookie seventh-round pick Carlos Davis in the mix to take over. Buggs had a career-high 5 1/2 tackles against Baltimore and appeared to grow more comfortable as the game wore on.

“I think first and foremost he is continually gaining an understanding of what professional conditioning is about,” Tomlin said. “I don’t know that he understood that a year ago. That’s often the case for young people. He’s really improved in that area, moving into his second year, and I think that is providing a springboard for an improvement in play.”

The Steelers have avoided any COVID-19 issues since the middle of training camp, but are on high alert after Baltimore cornerback Marlon Humphrey announced he had tested positive for the virus just hours after the final gun. Tomlin said the team will not use any potential restrictions as an excuse for their play and defended the NFL's efforts to stay on top of the virus.

“Let me be clear here, I am extremely pleased with the efforts of the National Football League in response to the pandemic and the steps that we are taking continually,” Tomlin said. “They are continually growing and changing and developing as needed. I have no issue with what we are doing in that area.”

NOTES: FB Derek Watt (hamstring) and S Jordan Dangerfield (quadriceps) are expected to play this weekend. ... DB Mike Hilton (shoulder), who has missed the past two games, will likely be limited early in the week.