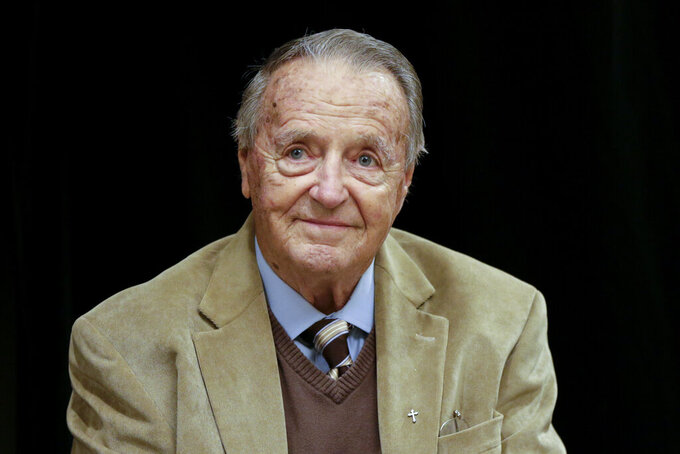 FILE - This is a Jan. 10, 2018, file photo showing former Florida State NCAA college football head coach Bobby Bowden at a Rotary Club luncheon in Omaha, Neb. Former Florida State coach Bobby Bowden has tested positive for COVID-19 and was home monitoring his symptoms. Family friend and Bowden's former publicist Kim Shiff says the 90-year-old Bowden had been hospitalized in Tallahassee, Florida, for about two weeks. He returned home late last week and was informed he had tested positive. Bowden told the Tallahassee Democrat on Monday, Oct. 5, 2020, he had not exhibited symptoms of the virus. (AP Photo/Nati Harnik, File)

Family friend and Bowden’s former publicist Kim Shiff said the 90-year-old Hall of Fame coach had been hospitalized for about two weeks, being treated for an infection after having a procedure to remove a skin cancer from his leg.

Bowden returned home late last week and was informed by his doctor he had tested positive for the virus on Saturday, he told the Tallahassee Democrat on Monday. He said he had yet to experience symptoms of COVID-19.

“I don’t feel bad, yet,” Bowden told the newspaper. “I guess I can loaf around the rest of the week. I just have to keep an eye out for (symptoms).”

Bowden coached Florida State for 34 years and is second on the career victories list in major college football with 357, behind only the late Joe Paterno of Penn State.

“We are thinking about coach,” Florida State coach Mike Norvell told reporters. “We will be praying for a speedy recovery.”

Bowden said he is isolating at his home in Tallahassee and his wife, Ann, along with his daughter and grandson, all of whom are being tested for the virus.