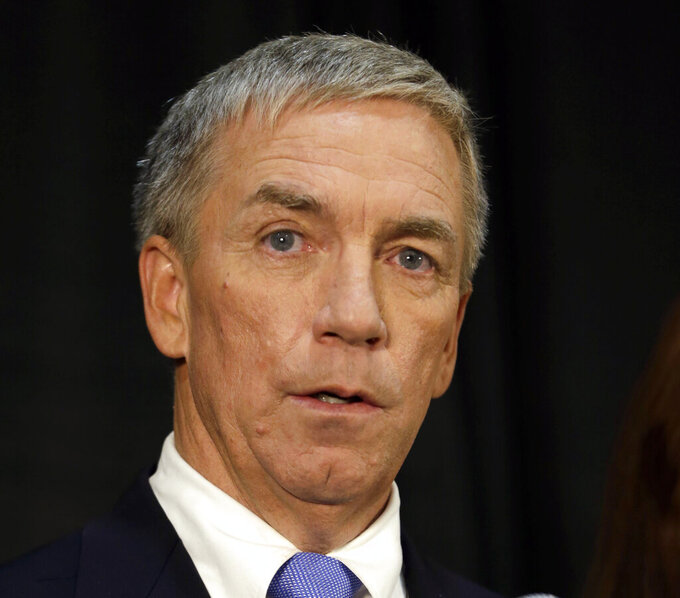 Ose becomes the third established Republican to enter the emerging contest, joining former San Diego Mayor Kevin Faulconer and businessman John Cox, who was defeated by Newsom in a landslide in 2018.

It's possible they could eventually be among dozens of candidates. There were 135 on the ballot in the state's 2003 recall election that removed former Democratic Gov. Gray Davis from office and replaced him with Republican Arnold Schwarzenegger.

The former congressman said he was ready to work across party lines to reopen schools and businesses in a state upended by the coronavirus, while taking on the long-running homelessness crisis.

"Californians are tired of having a governor whose operating themes are hypocrisy, self-interest, half truths and mediocrity," Ose, 65, said in a statement announcing his candidacy.

“Newsom sides with unions that close our schools while sending his own kids to private school. He dines in the state’s fanciest restaurants while telling everyone else to stay at home. He lives in a gated mansion while allowing the state’s homeless crisis to spin out of control. Enough is enough,” added Ose, who served in Congress from 1999 to January 2005.

On Monday, Newsom launched his campaign with an attack on the senior recall organizers, depicting them as political extremists loyal to former Republican President Donald Trump. Recall organizers said Newsom was attempting to smear an effort that has gathered over 2 million petition signatures statewide to place the proposal on the ballot this year.

About 1.5 million signatures are needed for the recall to qualify for the ballot, though hundreds of thousands must still be validated by election officials. The deadline for submitting signatures is Wednesday.

In an interview last month, Ose said voters are clamoring for new leadership after Newsom’s wobbly COVID-19 vaccine rollout and long-running coronavirus rules that have shuttered businesses and public schools.

Ose, a businessman from the Sacramento region, said he will run in the recall if it qualifies or, if it doesn’t, challenge Newsom when he is expected to seek a second term in 2022.

He faces the challenge of quickly becoming better known across California, home to 40 million. Ose, a political moderate, briefly ran for governor in 2018 before dropping out of the race, citing a lack of funding.

In interviews Tuesday, the governor kept up his criticism of leaders of the recall drive, telling CNN “we are taking it very seriously.” Newsom also defended his leadership during the pandemic, saying his decision to issue the nation’s first statewide stay-at-home order saved “thousands and thousands” of lives.

He's also been forced to defend his decision to attend a birthday party with friends and lobbyists at an opulent restaurant while telling residents to stay home.

In a Tuesday appearance on “The View” he said attending the dinner was a one-time mistake.

“Of course it was a mistake, and I didn’t shy away from that and never made one prior in that respect and since,” Newsom said.

The Sacramento Bee reported that a new policy will ban Jason Kinney, a lobbyist whose birthday was being celebrated at the restaurant, from lobbying the governor or his administration. Technically, the policy expanded a ban on political consultants lobbying Newsom to include unpaid consultants. The policy change followed criticism Newsom faced for attending the party.

Newsom also has lined up support from national Democrats to defeat the campaign against him, including Vermont Sen. Bernie Sanders, New Jersey Sen. Cory Booker and Massachusetts Sen. Elizabeth Warren.

It's probably too early to say how a widening Republican field will affect the likely election.

The recall is divided into two parts: First, voters are asked if Newsom should be removed, yes or no. The second question is a list of replacement candidates, should the governor be ousted.

So far, no prominent Democrat has entered the recall election.

Claremont McKenna College political scientist Jack Pitney said the emergence of several candidates running on pro-Trump agendas would be an advantage for the incumbent in a state where Democratic voters outnumber Republicans by nearly 2-to-1 and Republicans haven't won a statewide race since 2006.

Trump lost California in November by over 5 million votes.

“If it's Newsom versus Trump, then Newsom wins,” Pitney said.