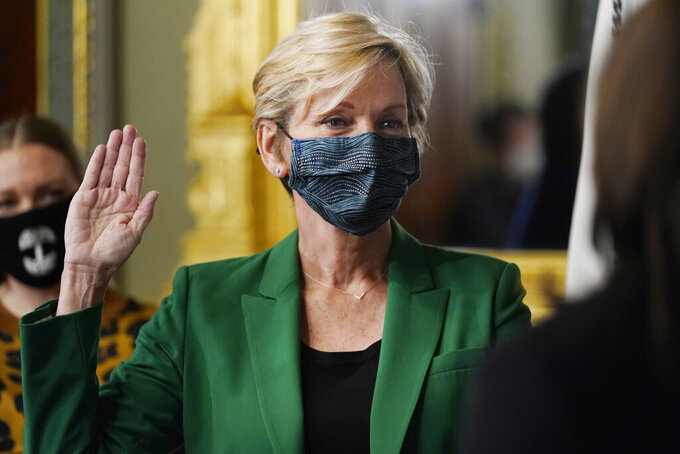 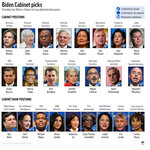 The vote was 64-35, with all Democrats and 14 Republicans, including GOP leader Mitch McConnell of Kentucky, voting yes.

Granholm, 62, served two terms as governor in a state dominated by the auto industry and devastated by the 2008 recession. She has promoted emerging clean energy technologies, such as electric vehicles and battery manufacturing, as an answer for jobs that will be lost as the U.S. transitions away from oil, coal and other fossil fuels.

Granholm, who was sworn in late Thursday, is just the second woman to serve as energy secretary. She tweeted her thanks to senators and said, "I’m obsessed with creating good-paying clean energy jobs in all corners of America in service of addressing our climate crisis. I’m impatient for results. Now let’s get to work!''

Sen. Joe Manchin, chair of the Senate Energy and Natural Resources Committee, said Granholm has the leadership skills, vision and compassion needed at the Energy Department to “develop innovative solutions for the climate challenge'' while preserving jobs.

Granholm is committed to working every day “to ensure that we don’t leave any workers behind as we move towards a cleaner energy future,'' said Manchin, D-W.Va.

During her confirmation hearing last month, Granholm pushed her plans to embrace new wind and solar technologies. But her position caused tension with some Republicans who fear for the future of fossil fuels.

Wyoming Sen. John Barrasso, the top Republican on the Senate energy committee, said Biden “seems to want to pull the plug on American energy dominance. So I cannot in good conscience vote to approve his nominee for secretary of energy.''

Barrasso and other Republicans have complained that a freeze imposed by Biden on oil and gas leases on federal lands is taking a “sledgehammer” to Western states’ economies. The moratorium could cost tens of thousands of jobs unless rescinded, Barrasso said.

He and other Republicans also bemoaned Biden’s rejection of the Keystone XL pipeline from Canada to the U.S. Gulf Coast, saying thousands of jobs will be lost and a friendly source of oil left idle.

Granholm assured lawmakers that creating jobs was her top priority — and Biden's.

“We cannot leave our people behind. In West Virginia, and in other fossil fuel states, there is an opportunity for us to specialize in the technologies that reduce carbon emissions, to make those technologies here, to put people to work here, and to look at other ways to diversify,'' she said at her Jan. 27 hearing.

During her introduction as Biden's nominee, Granholm described arriving in the U.S. at age 4, brought from Canada by a family “seeking opportunity.” She said her father found work as a bank teller and retired as head of the bank.

“It’s because of my family’s journey and my experience in fighting for hardworking Michigan families that I have become obsessed ... with gaining good-paying jobs in America in a global economy,” she said.

In other action Thursday on Biden's Cabinet nominees:

Surgeon general nominee Dr. Vivek Murthy said Americans must not lose track of opioid addiction and other health emergencies amid the intense national focus on overcoming the coronavirus pandemic. He told senators at a hearing that “we cannot neglect the other public health crises that have been exacerbated by this pandemic, particularly the opioid epidemic, mental illness and racial and geographic health inequities.”

After dipping slightly, opioid deaths have risen again, the result of street formulations laced with the powerful painkiller fentanyl.

Murthy told the Senate Health, Education, Labor and Pensions Committee that the overdose rescue drug naloxone should be even more widely available and that medication-assisted treatment must be expanded.

Murthy, who was surgeon general in the Obama administration, has drawn opposition from gun rights groups because of his assessment that gun violence is a public health problem. But he tried to dispel notions that he would launch a crusade against guns.

He told Sen. Mike Braun, R-Ind., that while he supports government studying the problem, “my focus is not on this issue, and if I’m confirmed it will be on COVID, on mental health and substance use disorder.”

Katherine Tai told the Senate Finance Committee that rebuilding international alliances would be a priority, as well as "reengaging with international institutions″ to present Beijing with “a united front of U.S. allies.″

Tai did not address whether the Biden administration would drop former President Donald Trump’s tariffs on imported steel and aluminum or whether it would revive the Obama administration's Asia-Pacific trade deal, which Trump killed.

Another key Republican lawmaker came out against Biden’s embattled pick to head the Office of Management and Budget, Neera Tanden, raising further questions about her viability.

Iowa GOP Sen. Chuck Grassley told reporters he won't support her nomination. He and Alaska Republican Sen. Lisa Murkowski were two Republicans seen as potentially gettable votes for the White House, as Grassley had previously said he’d had good conversations with Tanden. Murkowski has yet to say how she'd vote.

With a handful of other key centrist Republicans coming out against her in recent days, Tanden’s path to confirmation hinges largely on Murkowski and Sen. Kyrsten Sinema, D-Ariz., neither of whom have made their positions known. The White House was forced to search for a Republican to support Tanden after West Virginia Sen. Joe Manchin announced his opposition last week.

Lawmakers have largely cited Tanden’s controversial and at times harshly critical tweets about members of both parties in explaining their opposition to her.