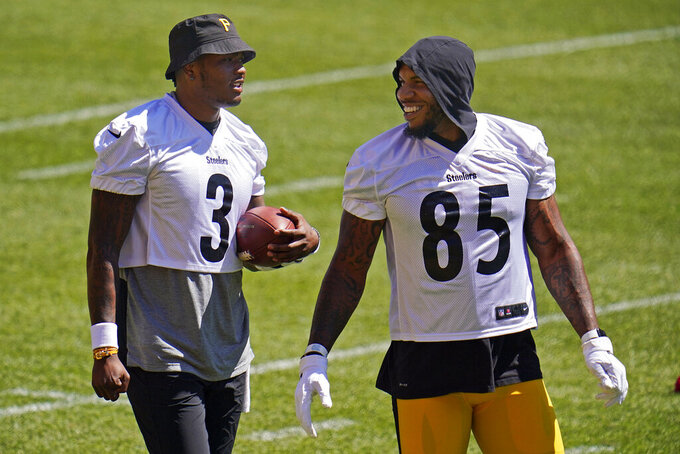 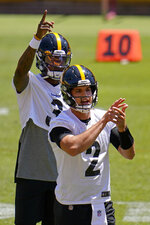 PITTSBURGH (AP) — Pittsburgh Steelers’ quarterback Dwayne Haskins wants to put a very forgettable run with Washington in the past.

The 24-year-old is looking for the chance to start fresh and to carve out a role in a crowded quarterback room that’s headlined by two-time Super Bowl winner Ben Roethlisberger.

“Just coming here to Pittsburgh, I want to prove to the coaching staff and my teammates just how much I love football and that I’m grateful for the opportunity to be here,” Haskins said. “I want to show them that my mind is in the right place and I’m willing to work and earn a spot here.”

The Steelers signed Haskins to a futures contract in January, giving the former Washington quarterback a second chance after he flamed out in the nation’s capital in less than two seasons after being taken with the 15th pick in the 2019 draft.

Haskins went 3-10 as a starter in two seasons. He completed 60% of his passes, while throwing 12 touchdowns and 14 interceptions.

Haskins, who grew up in nearby Potomac, Maryland, also experienced maturity problems, while enduring the pressure of trying to be the franchise quarterback at a place that’s searching for stability under center.

Haskins insists that those issues are behind him.

“My expectation here is to make everyone who decided to take a chance on me look good,” Haskins said. “I tried the best that I could and it just didn’t work out the way that I wanted it to. I’m grateful to be here in Pittsburgh and thankful for the opportunity to have a shot. I want to work as hard as I possibly can and let my work speak for itself.”

Haskins was fined $40,000 and lost his captaincy in Washington late last season. He broke COVID-19 rules by partying with several people without a facemask following a December loss against Seattle.

A little more than a week later, Haskins was released, a move that he admits wasn’t surprising.

“It’s part of the business,” he said. “But I can’t go back and change it, or tell people what really happened. It’s in the past now. It was, for sure, humbling, but I just wanted to be at a place where I feel like I was wanted, and I feel wanted here, so I’m thankful.”

Haskins said he “wasn’t the biggest fan of the COVID-19 vaccine at first,” but he is vaccinated.

“I just wanted to be around my teammates, and I want to be in meetings and not necessarily be social distancing,” Haskins said. “The biggest thing is to do what’s best for each other, for the team and my opportunities here in Pittsburgh.”

The Steelers' quarterback room is crowded, also featuring Mason Rudolph and Josh Dobbs. Coach Mike Tomlin intends to give Haskins every opportunity to rediscover his 2018 Ohio State form, when he threw for 4,831 yards, 50 touchdowns and eight interceptions.

“Really, I’ve been more concerned about Dwayne the person, kind of getting to know him and getting an understanding of what he’s been through and how that’s shaped him positively and negatively, and affected the growth and development of his game,” Tomlin said. “I just want to get to know the young man and help him grow in that way.”

Haskins’ physical abilities have already stood out to Roethlisberger.

“His release and throwing motion mechanics are some of the prettiest I have ever seen,” Roethlisberger said.

Haskins appreciates the high praise from the 18-year veteran. Haskins said that those types of comments serve as additional motivation to leave his rocky start with Washington in the past.

“They expect a lot out of me, as far as being prepared and being the best version of myself,” Haskins said. “It’s up to me to allow that to speak for itself.”