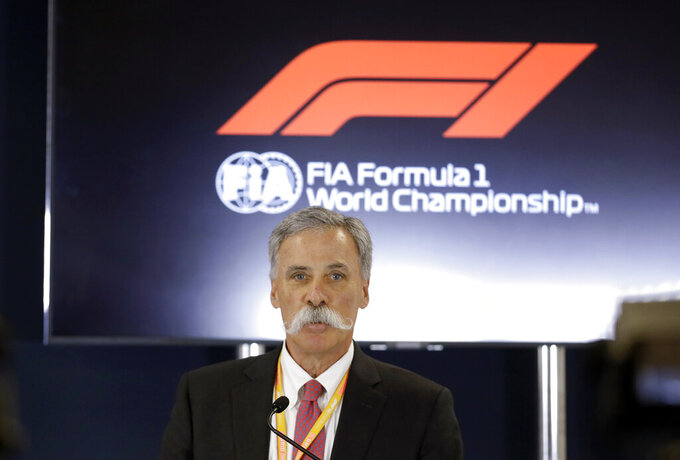 FILE - In this file photo dated Thursday, Oct. 31, 2019, Formula One chairman Chase Carey speaks during a news conference at the Formula One U.S. Grand Prix auto race at the Circuit of the Americas, in Austin, USA. Carey said Monday April 27, 2020, he is “increasingly confident” the season can start in July despite the first 10 races being canceled or postponed amid the coronavirus pandemic. (AP Photo/Darron Cummings, FILE)

PARIS (AP) — The Formula One season could start in July despite the first 10 races being canceled or postponed because of the coronavirus pandemic, F1 chairman Chase Carey said Monday.

The French Grand Prix on Monday canceled its race scheduled for June 28 rather than postponing it, making July 5 the targeted start date at the Austrian GP in Spielberg.

“We are now increasingly confident with the progress of our plans to begin our season this summer,” Carey said in a statement. “We’re targeting a start to racing in Europe through July, August and beginning of September, with the first race taking place in Austria.”

The 2020 schedule was already stretched to 22 races, with the inaugural Vietnam GP added to the calendar and the Dutch GP hosting its first race since 1985 as the German GP dropped out.

The season-opening Australian GP on March 15 and the iconic Monaco GP on May 24 were also canceled.

Carey hopes that 15-18 races can take place in Europe through September before moving to “Eurasia, Asia and the Americas." The season would conclude in the Gulf with the Bahrain GP — initially set for March — and the Abu Dhabi GP.

“We expect the early races to be without fans but hope fans will be part of our events as we move further into the schedule,” Carey said. “We still have to work out many issues like the procedures for the teams and our other partners to enter and operate in each country.”

The British GP is set to follow Austria on July 19 and organizers said they are talking to the government about the viability of holding it without fans.

F1's finances have taken a hit with so many races called off, and smaller teams especially face an uncertain future. This has led to several discussions about reducing the budget-cap level.

“We have also been working hard with (governing body) FIA and the teams to strengthen the long term future of Formula 1 through an array of new technical, sporting, and financial regulations,” Carey said.

A budget cap of $175 million was agreed last year but teams want it lowered to $150 million for next year — excluding driver salaries and engine costs. But McLaren wants it reduced to $100 million, an initiative which Ferrari opposes.

Some leading drivers, including six-time world champion Lewis Hamilton of Mercedes and four-time champion Sebastian Vettel of Ferrari, are in the final year of their contracts.