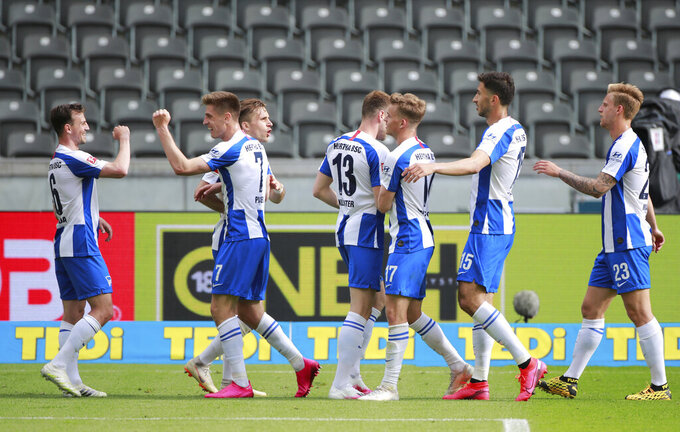 Hertha BSC's Krzysztof Piatek celebrates scoring their second goal with teammates during the German Bundesliga soccer match between Hertha Berlin and Augsburg at the Olympiastadion in Berlin, Germany, Saturday, May 30, 2020. Because of the coronavirus outbreak all soccer matches of the German Bundesliga take place without spectators. (Hannibal Hanschke/pool photo via AP)

BERLIN (AP) — The Bundesliga’s coronavirus-induced break has changed the fortunes of the Berlin clubs.

While Hertha used the break to good effect – bringing in a new coach who is unbeaten with three wins from four games – Union has gone six matches without a win.

Union’s previously mean defense has conceded 11 goals in four games since the league resumed, and the promoted club is coming under increasing pressure from teams below in its fight for survival.

“It’s not the most fun part of the season,” Swedish striker Sebastian Andersson said after the 4-1 loss at Borussia Mönchengladbach on Sunday.

The team was 11th before the virus hit in March but is now 14th in the 18-team division, four points above Fortuna Düsseldorf, which occupies the relegation playoff spot with five games remaining.

“We knew in advance that it wouldn’t be easy to survive in the Bundesliga,” Union captain Christopher Trimmel said. “We have to get points, especially at home.”

Union’s home advantage has been weakened with no supporters allowed at any games since the league resumed on May 16. Fans are being kept away for the rest of the season due to the pandemic.

Hertha seems to be coping fine without fans.

Bruno Labbadia, who was appointed Hertha’s fourth coach of the season during the break, has stabilized the team after months of chaos caused by changes after investor Lars Windhorst’s takeover and the fallout from Jürgen Klinsmann’s abrupt resignation as coach.

Hertha was 13th when Labbadia took over. Now the self-titled “Big City Club” is ninth and talking of qualifying for Europe, four points behind sixth-place Wolfsburg. “Not such a big gap,” goalkeeper Rune Jarstein said.

Hertha has claimed 10 points from a possible 12 since the league resumed. "There was too much disruption before,” said Labbadia, who has addressed defensive frailties and formed the team into a cohesive unit.

Now, Labbadia is looking toward Europe. “We’d never exclude anything,” he said after Saturday’s 2-0 win against Augsburg.

The former Stuttgart and Hamburger SV coach is coaching his eighth Bundesliga team. He helped Wolfsburg qualify for this season's Europa League and says he’s improving all the time.

“I’ve become better at every post. I think I am today the best coach I ever was because experience is unbelievably important,” the 54-year-old said.

“When you see our remaining games, you can see how important these (10) points were,” Labbadia said.

Union looks to have an easier run-in, but must play relegation rivals like Paderborn and Düsseldorf.