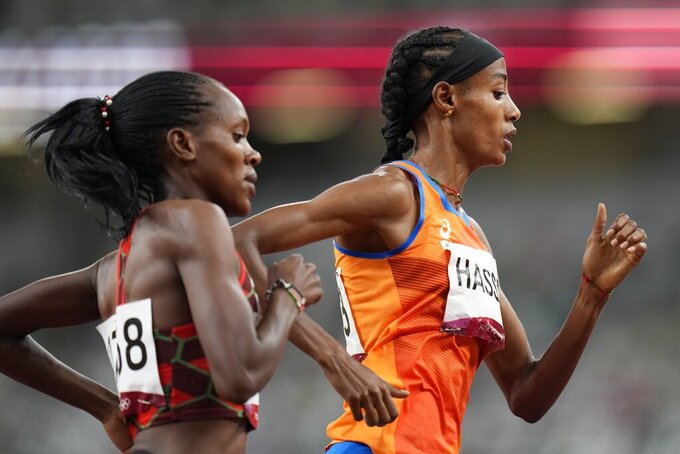 TOKYO (AP) — There are some things track fans are used to: Nobody stops the Jamaican women at these Olympics and the tireless Sifan Hassan is a contender for a medal in every distance race she enters.

Other things might take some getting used to: Italy is a sprint power. It now owns the gold medal in the men's 4x100-meter relay to go with the shocking 100-meter gold that Marcell Jacobs won.

The Italian relay team made Jacobs a double Olympic champion Friday, as the country pulled off a stunner to equal Jacobs' solo triumph five nights earlier. Jacobs ran the second leg of Italy's 37.5-second trip around the track, and Filippo Tortu outraced Britain's Nethaneel Mitchell-Blake to the line.

Tortu, who was slightly behind at the changeover, dipped first for a .01-second victory.

“We are four Ferraris,” Tortu said.

The triumph set off a second bout of Italian sprint celebrations on the track at the Olympic Stadium — two more than anyone expected when these Games opened.

Canada, featuring 200-meter champion Andre De Grasse, took bronze in 37.70. A Jamaican Olympic squad without Usain Bolt came in fifth to end a run of three straight relay wins for the island nation. (One was stripped because of a doping case.)

Jamaica with Bolt used to be a virtual guarantee for gold. At these Olympics, a Jamaican women's team with the world's three fastest sprinters was the surest thing going.

Elaine Thompson-Herah, the double-sprint champion in Tokyo, ran the second leg after an awkward, but legal, exchange with Briana Williams. She passed the baton to Shelly-Ann Fraser Pryce, the 100 silver medalist. Fraser-Pryce connected with Shericka Jackson, the 100 bronze medalist, and Jackson took the Jamaican women home in a national-record of 41.02 seconds. It was the night's least-surprising performance — but still impressive.

It also delivered a third gold of the games for Thompson-Herah, who won the 100, 200 and 4x100 relay in Bolt-like fashion.

“We got the national record, Elaine got her third gold medal, we’re all going home with a gold medal, so we’re just very grateful for the effort,” Fraser-Pryce said.

The United States won silver in 41.45 while the U.S. men weren't in the stadium the day after a bad exchange doomed them to a sixth-place finish in their qualifying heat.

Earlier, Hassan kept her own run of medals in middle- and long-distance going with a bronze in the 1,500 meters to go with her gold at the start of the week in the 5,000. Her assignment is not over yet. She'll chase a third medal in the 10,000 final on Saturday night. It will be her sixth race in eight days.

The Ethiopian-born runner, who competes for the Netherlands, won every one of her races in Tokyo before Friday by running at the back or near the back of the field and unleashing her speed on the final lap.

But she changed those tactics in the 1,500 final by surging to the front straight away and pushing the pace hard. She couldn't hold it. Faith Kipyegon of Kenya lurked on Hassan's shoulder through the last lap and made her move on the final bend. Hassan couldn't respond.

Kipyegon went away to retain her Olympic title and set a new Olympic record of 3 minutes, 54.11 seconds. Laura Muir of Britain also pushed ahead of Hassan to take the silver medal.

“I think the body is very tired,” said Hassan, who once again draped herself in a Dutch flag after her race. She made clear her aim for the 10,000 is no longer gold, it's just a medal.

Likewise, Allyson Felix needed any color medal to make history on Day 8 of the track and field competition in Tokyo. The 35-year-old American got it with a bronze in the 400 meters won in a romp by Shaunae Miller-Uibo of Bahamas, who beat Marileidy Paulino of the Dominican Republic by .84 seconds.

Felix now stands alone as the most-decorated female athlete in the history of Olympic track, with 10 medals. She won No. 10 less than three years removed from a difficult pregnancy that left her wondering if she’d make it back to this point.

When it was over, she lay on her back on the track, hands covering her face but with a smile peeking through from behind them.

“This one is very different, and it’s very special,” she said. “And it just took a lot to get here.”

— Joshua Cheptegei of Uganda made his decision to come to the Olympics a highly-profitable one with a gold in the 5,000 meters to go with his silver in the 10,000. Cheptegei had said he was considering skipping Tokyo after an injury and a run of poor form.

— Liu Shiying of China won the women's javelin with a throw of 66.34 meters.

— The 50-kilometer race walkers were up at 5.30 a.m. in the northern city of Sapporo and Dawid Tomala won gold in what might be the event's last appearance at the Games. The 50K walk has been dropped from the schedule for Paris in 2024. Antonella Palmisano won the women's 20K walk.