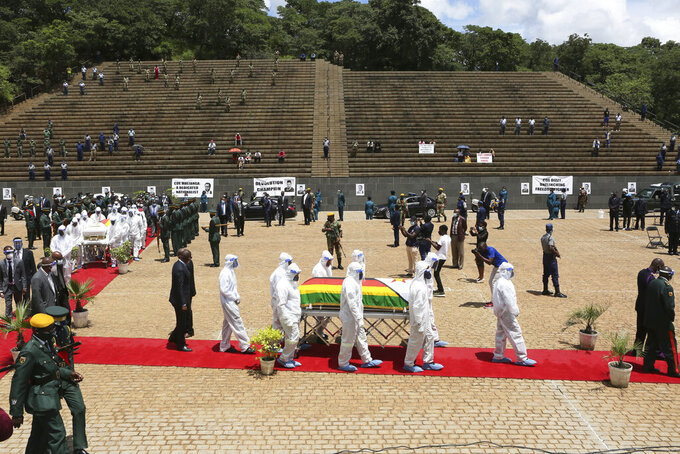 Pallbearers carry the coffin of a government minister of Dr Ellen Gwaradzimba who died of COVID-19, at the Heroes Acre in Harare, Thursday, Jan. 21, 2021. Zimbabwean President Emmerson Mnangagwa who presided over the burial called the pandemic "evil" and urged people to wear masks, practice social distancing and sanitize, as cases across the country increased amid a fragile health system. (AP Photo/Tsvangirayi Mukwazhi)

HARARE, Zimbabwe (AP) — Four Zimbabwean Cabinet ministers have died of COVID-19, three within the past two weeks, highlighting a resurgence of the disease that is sweeping through this southern African country.

President Emmerson Mnangagwa said the coronavirus is reaping a “grim harvest” in the country.

“The pandemic has been indiscriminate. There are no spectators, adjudicators, no holier than thou. No supermen or superwomen. We are all exposed,” Mnangagwa said on a nationally televised address.

Mnangagwa presided at the burial of one Cabinet minister last week, shortly after the death of the foreign minister was announced. Then came the death of the transport minister. Several other high-profile politicians and prominent Zimbabweans have also died recently.

The opposition accuses the government of using COVID-19 as a weapon by detaining its members of parliament, officials and other critics in overcrowded jails where the disease is easily transmitted. Critics also accuse the government of neglecting the public hospitals, where many ill with COVID-19 cannot get oxygen needed to survive. Many of the country's elites are treated at expensive private facilities or fly out of the country for health care.

The government says it is doing its best, and that despite the wide political and economic differences, fighting the virus is everyone’s war.

Zimbabwe, like many other African countries, initially recorded low numbers of COVID-19 but has recently experienced a spike in cases. There are fears that a new, more infectious variant of the virus came to the country when scores of thousands of Zimbabweans living in South Africa returned home for the holiday season.

The country of 15 million recorded a total of 31,007 cases, including 974 deaths, on Jan.23, up from the slightly more than 10,000 cases and 277 deaths at the beginning of December, according to government figures.

In poor areas such as Chitungwiza, the sprawling residential area about 30 kilometers (18 miles) southeast of Harare, gravediggers are overwhelmed.

“Coronavirus, this is something I used to read about in the news, (but) it is here on our doorsteps now. People are dying,” said Coleta Moyana, a Chitungwiza resident. Officials are seeking more burial space to accommodate rising numbers of deaths.

Many people are not being tested, nor are they going to hospitals for help, said a doctors’ association, noting that on some days, nearly half of COVID-19 deaths happen outside hospitals.

“COVID-19 is affecting everyone, but it is not affecting everyone equally. It has entrenched and exacerbated the extreme inequalities and injustices that existed before the pandemic," Itai Rusike, director of the Harare-based organization, Community Working Group on Health, told The Associated Press on Sunday.

"The majority of poor Zimbabweans without medical insurance end up dying at home,” he said.

Zimbabwe has not yet received any vaccines. Mnangagwa on Saturday said the government health officials are still deciding which vaccine to acquire.

“Our experts are very close to finalizing the course to recommend … and it will be quite soon,” he said.