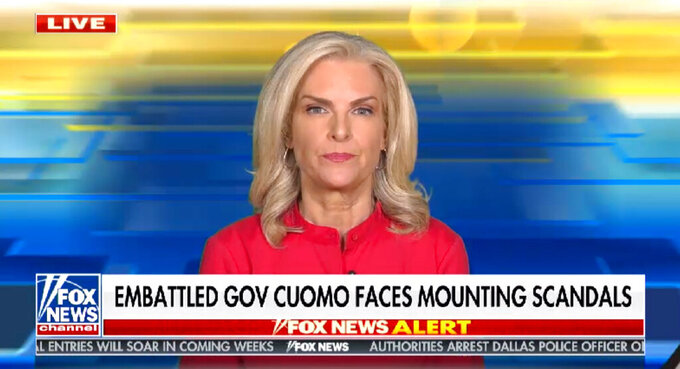 This image provided by Fox News Corp on March 5, 2021, shows Fox weather forecaster Janice Dean, who's become one of New York Gov. Andrew Cuomo's fiercest critics after both of her in-laws died of the coronavirus last spring in elderly care facilities. (Fox News Corp via AP)

NEW YORK (AP) — To Fox News Channel’s Janice Dean, New York Gov. Andrew Cuomo is a liar and a criminal. He blames others for his “disastrous decisions.” He needs to resign — no, that’s not enough.

Dean isn’t a political commentator — she’s Fox’s senior meteorologist. In the past year, though, a searing personal loss has transformed her into a fighter for families who believe that a Cuomo-backed policy encouraging the transfer of COVID-19 positive patients into nursing homes was a deadly error.

Yet Dean's advocacy and raises ethical questions. She's also made some dubious public claims about the impact of Cuomo’s nursing home order and an NBC News story.

March and April 2020 were a nightmare time in New York, with the new coronavirus spreading wildly. The timing was particularly cruel for Michael and Dolores Newman the parents of Dean’s husband, Sean. Brooklyn through and through, they were married three days before Valentine’s Day 1961.

Michael Newman, an 83-year-old former firefighter, was in a Brooklyn facility with dementia and other issues. Dolores was in assisted living on Long Island, and hoped her husband would join her when his health improved.

But he died March 29, a few hours after Sean got a call saying he wasn’t feeling well. Dolores, 79, died on April 13.

Looking into the deaths, the family was flabbergasted to learn of the Cuomo administration’s directive — five days before Michael Newman's death — that nursing homes could not deny admission to someone solely because they had COVID-19. The policy was expanded to cover assisted living facilities six days before Dolores Newman died.

New York was desperately worried about running out of hospital space then. Cuomo insisted that CDC guidelines were being followed, and that it was wrong to discriminate against people because they had COVID.

By May, the order was rescinded. Stories have since emerged about the lengths to which Cuomo's administration went to conceal the number of virus deaths among nursing home residents.

Putting potentially contagious patients near some of society’s oldest and most vulnerable populations made no sense to Dean.

She didn’t talk about it publicly at first. That changed last May when CNN host Chris Cuomo brandished a giant cotton swab to joke about the big nose of his brother, the governor.

Dean, who is the weather forecaster on “Fox & Friends” and has been with the network since 2004, said her bosses have been fully supportive.

“Obviously, it’s a position that is probably a little uncomfortable for them because I’m the meteorologist and all of a sudden I’m into this role of being an advocate,” she said. “But at the end of the day, my family was affected. And I feel like that is an important role to play if there are not people that have a voice in this.”

For Fox’s audience dominated by conservatives tired of hearing criticism of then-President Donald Trump’s pandemic response, here was an issue that raised serious questions about a politician lionized by many liberals.

No one knows for sure how Dean’s in-laws caught the virus, and facilities refused to discuss the Newmans.

Dean has explicitly connected her in-law's deaths to Cuomo's nursing home directive. But that's unlikely, given the disease's usual incubation period and when they died. New research says nursing home residents are most at risk from outbreaks that staff or visitors bring inside.

Dean’s disgust with Cuomo remains while a sexual harassment scandal swirls around the governor. Last month during one of his news conferences, she kept a running commentary on Twitter, calling him a “disgrace,” a liar and “a criminal.”

Fox wouldn’t make an executive available to talk about Dean. A spokeswoman notes that Dean is not a news reporter, and is talking about an issue that deeply affected her family.

On. Jan. 30, Dean attacked NBC News on Twitter, saying they had “censored” a friend interviewed on the topic by making her say that New York had failed nursing home families, instead of Cuomo. But a tape of reporter Kristen Dahlgren's interview disproves that notion, and the finished story is critical of Cuomo. Dean said the tape was doctored, but offered no evidence to back that up.

While Dean waves off thoughts of a political future, others don’t.

“The best people who go into politics come at it organically, like people that weren’t running for office their entire life,” McCain said. Dean “has this way of speaking for just average Americans that I find really compelling. I am one of the people behind the scenes that’s been encouraging her to run for office.”