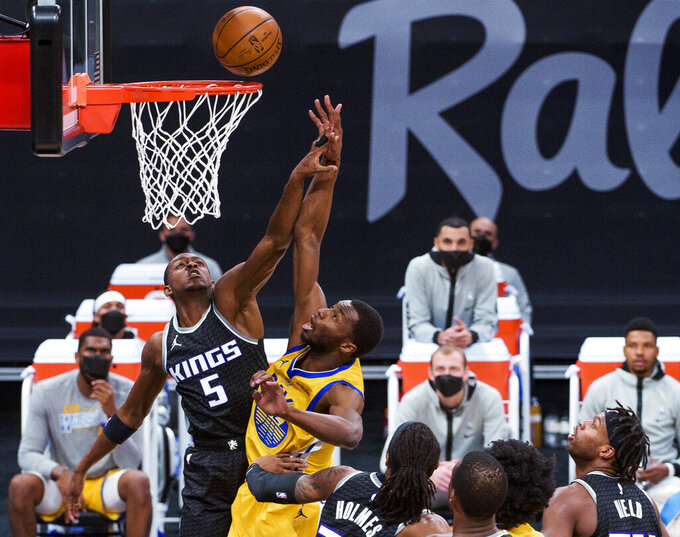 “They were like, ‘Go get 50,'" Fox said. “I’m like, ‘Let’s just get this game over with. There’s other opportunities for this to happen.’ That’s what I said. I wasn’t looking for a career high but if the shots were there, take them.”

Fox had a career-best 44 points as the Kings romped to a 141-119 victory against a short-handed Warriors team Thursday night.

The mercurial Fox shot 16 of 22 and added seven assists, continuing his two-week scoring surge. He's topped 40 points twice this season and poured in 30 or more in six of his last 10 games. He is averaging 30.7 points during that span.

“It’s fun to watch, it really is,” Sacramento coach Luke Walton said. “To see him continue to figure things out, to see him continue to grow as a leader both vocally and leading by example with his play, is a lot of fun. He’s in a good place right now. When De’Aaron is playing like this, we’re a pretty good team.”

Tyrese Haliburton added 21 points with a career-high six 3-pointers, and Richaun Holmes had 25 points and 11 rebounds for the Kings. Buddy Hield scored 16. Sacramento has won five of six.

Golden State beat Sacramento by 31 points in January. This time, the Warriors were missing two of their stars.

Stephen Curry sat out his fourth straight game with a bruised tailbone. Draymond Green also was held out after waking up feeling ill.

“Draymond did not come to shootaround and is not feeling well at all right now,” Warriors coach Steve Kerr said before the game.

Haliburton put the Kings up by 22 late in the third quarter with a double step-back move that left Damion Lee flailing before the Sacramento rookie sank a 3-pointer and was fouled. Haliburton also made a four-point play a night earlier against Atlanta.

Oubre’s 3-pointer cut the gap to 111-100, but the Warriors couldn’t get any closer. Fox made consecutive 3s, then added a pair of free throws to extend the margin to 18.

“It’s just continuing to stay in attack mode early and often,” Fox said. “Not try to force anything but attack the basket, look for open guys, try to score on all three levels. I feel like no matter who it is I can pretty much get to the basket. Once you see the ball go through the basket a couple times, it definitely helps to shoot jumpers after that.”

Oubre felt the Warriors struggled after falling behind.

“Fox is obviously on a tear right now,” said Oubre, who played AAU ball with Fox while both were growing up in Houston. “He’s the fastest point guard in the league. It’s hard to stop that when we’re on our heels the whole game.”

Sacramento made a flurry of moves just ahead of the NBA trade deadline, acquiring Delon Wright from the Detroit Pistons and forwards Moe Harkless and Chris Silva from the Miami Heat. Additionally, the Kings obtained guard Terence Davis from the Toronto Raptors for a 2021 second-round draft pick.

The Kings sent Cory Joseph and a pair of second-round picks to the Pistons, while Nemanja Bjelica was dealt to the Heat.

Kerr said about 12 players and coaches, including Green, received the one-dose Johnson & Johnson COVID-19 vaccine on Wednesday at Kaiser Permanente near Chase Center in San Francisco.

“So I was very happy to receive mine,” Kerr said. “Just the one shot, which is great.”

Kerr is encouraged by this “important” step in the process of returning to somewhat normal living as soon as possible.

“It’s important for us. We’ve been really hit hard just by COVID protocols obviously as a team, so it’ll be nice to get as many guys as possible vaccinated and hopefully not have any more issues in terms of missing games, but more importantly is just the general health and welfare of not only our guys but everybody. The more people who can get vaccinated out there the better so we can build herd immunity and move past everything as a society.”

Warriors: Mychal Mulder was held out because of illness.

Warriors: Face the Hawks at Chase Center on Friday. Golden State has won seven straight at home against Atlanta.