France and Germany push for cease-fires to tackle pandemic 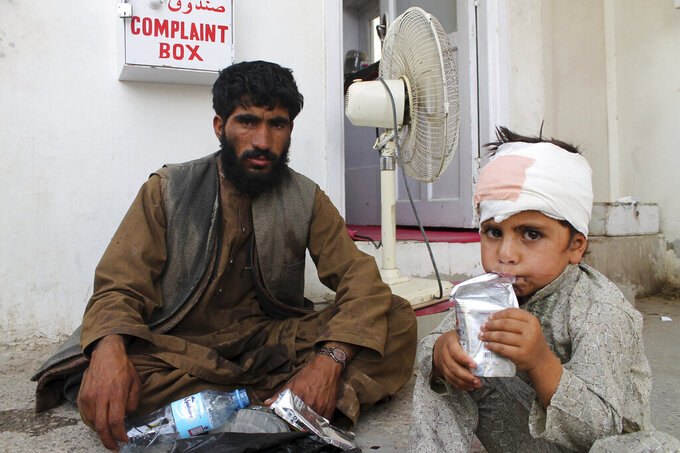 A boy who was injured boy in a deadly attack on a market sits on the ground at a hospital in Helmand province, Monday, June 29, 2020. A car bombing and mortar shells fired at a busy market in southern Afghanistan's Helmand province on Monday killed over 20 people, including children, a statement from a provincial governor's office said. (AP Photo/Abdul Khaliq)

French Foreign Minister Jean-Yves Le Drian said during a virtual council meeting that “we now need to redouble our efforts,” pointing to conflicts in Syria, Yemen, Libya, Africa’s Sahel region and Afghanistan where “the situation remains extremely unstable and civilian populations continue to suffer the consequences.”

German Foreign Minister Heiko Maas, who presided at the meeting, urged often-divided council members to implement the “long overdue” resolution by working together toward cease-fires in specific countries. “We all know that they can facilitate humanitarian access and serve as entry points for political talks," he said.

The U.N.’s most powerful body voted unanimously to adopt the resolution after the United States and China resolved a more than three-month dispute over mentioning the World Health Organization, which the Trump administration opposed and Beijing insisted on. The compromise test doesn’t mention the U.N. health agency, which the U.S. has stopped funding, but refers to a General Assembly resolution that supports WHO guidelines.

The resolution, drafted by France and Tunisia, backs U.N. Secretary-General Antonio Guterres’ March 23 call for global cease-fires because of the pandemic and demands an “immediate cessation of hostilities” in all conflicts on the council's agenda.

It calls on all warring parties “to engage immediately in a durable humanitarian pause for at least 90 consecutive days” to enable the safe and unhindered delivery of humanitarian aid and medical evacuations. It exempts military operations against the Islamic State and al-Qaida extremist groups and their affiliates.

The secretary-general said his cease-fire call had “yielded some positive results, but these have since expired or in some cases broken down” and he welcomed the council's demand for a halt to fighting.

“The COVID-19 pandemic continues to profoundly affect peace and security across the globe,” Guterres told the council. “The consequences can be seen even in a number of countries traditionally seen as `stable.’ But the impacts are particularly apparent in countries already experiencing conflict or emerging from it — and may soon engulf others.”

Guterres said in Sudan’s restive Darfur region, for example, the pandemic and other challenges have led to repeated extensions of the deadline for completing a peace process. In Somalia, Al-Shabab extremists are continuing frequent attacks despite the coronavirus outbreak and could increase the violence while security forces are focusing on the pandemic, he added.

The secretary-general said elections or referendums have been held in 18 countries since the start of the pandemic in March, but 24 have been postponed. In fragile Central African Republic, still beset by violence, tensions have risen “due to attempts to use the pandemic as a pretext to postpone the holding of elections planned for the end of the year,” he said.

Peter Maurer, president of the International Committee of the Red Cross, told the council that conflict zones are “the sharp end” of pandemics where people already live on a knife edge.

He told the council his organization is seeing first-hand how COVID-19 and its “economic aftershocks” are deepening global “fragility, spiking humanitarian needs, accentuating the impact of violence and conflict, opening the doors to alarming levels of stigmatization, increasing global poverty (and) heightening instability and tensions.”

According to the Red Cross' analysis, “there are now around 100 armed conflicts around the world” involving 60 governments and more than 100 armed groups, and the number of conflicts has been rising steadily over recent decades, he said.