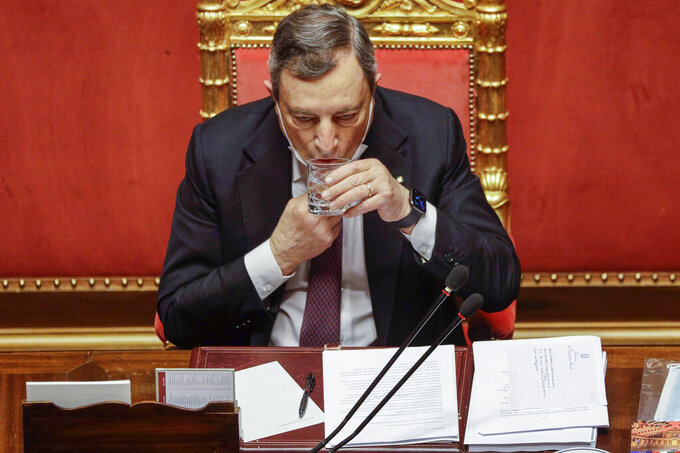 Italian Premier Minister Mario Draghi sips water at the end of his address at the Senate in Rome, Tuesday, April 27, 2021. Italian Premier Mario Draghi is presenting a 222.1 billion euro ($268.6 billion) coronavirus recovery plan to the Seante. The plan is aiming to not only bounce back from the pandemic but enact "epochal" reforms to address structural problems that long predated COVID-19.(AP Photo/Gregorio Borgia, Pool)

FRANKFURT, Germany (AP) — France and Germany together laid out plans for billions in spending from the European Union's pandemic recovery fund aimed at fighting climate change and boosting the use of digital technology across the economy.

The finance ministers of the EU's two biggest economies on Tuesday underlined their joint determination to use the spending to transform Europe's economy and get the continent growing again as it lags behind the U.S. and China in rebounding from the pandemic recession.

Under the fund's formula, France should get around 40 billion euros ($48 billion) while German Finance Minister Olaf Scholz said his country planned about 28 billion euros ($36 billion) in spending. Scholz said that half the money would go to environmentally friendly projects and a quarter to spreading the use of digital technology. He said the fund would build on domestic relief and stimulus measures already passed by the German government.

He called the fund “a groundbreaking step for Europe.”

French Finance Minister Bruno Le Maire urged the European Commission, the EU’s executive branch, to quickly evaluate the plans so that money can start flowing to members states from the 750 billion euro ($906 billion) fund as early as July, noting that the U.S. and China have recovered faster. He said that since the fund was approved “we have lost too much time” and that “Europe must remain in the race.” Last year, France’s economy shrank by 8.3% amid the virus crisis, the worst slump since World War II, according to national statistics institute INSEE.

They said the new spending, funded by shared debt, would avoid mistakes made in the wake of the 2008-2009 global financial crisis and recession, when countries focused excessively on cutting spending and closing deficits. Le Maire said “today the priority is clearly to invest massively, not to consolidate public finances. We have drawn lessons from the past.”

Spain’s Cabinet also approved its proposal for how it wants to invest the recovery funds. Spain, which has suffered heavily from the pandemic, is set to receive 140 billion euros ($166 billion) — half in direct payments and the other half in loans — from the EU's recovery plan, second only to Italy. In line with EU priorities, Spain’s left-wing government has placed a heavy emphasis on creating a greener economy while boosting productivity for an economy that shrunk by 11% last year.

The money from the fund, which was agreed in July 2020, comes with pressure from Brussels to address problems identified by the European Commission's review of members states' economic policies. Spain, for instance, is being asked to overhaul labor laws, tax practices and pensions. Countries with low tax regimes such as Ireland or Cyprus are under pressure to discourage aggressive tax planning by multinational companies.