France: Lebanon is running out of time before total collapse 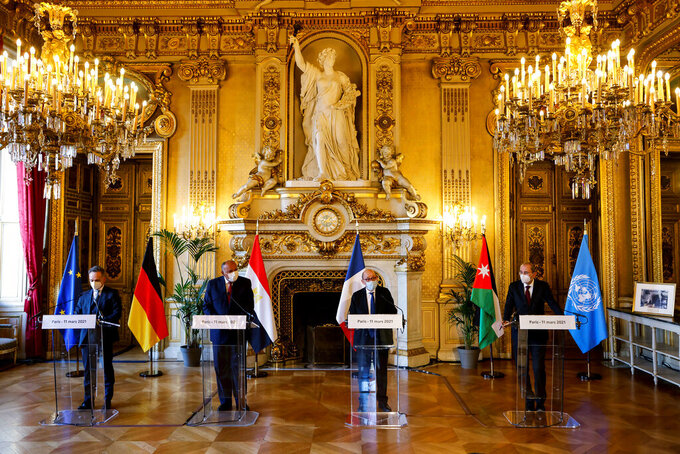 PARIS (AP) — France's foreign minister warned on Thursday that Lebanon is running out of time before it could see a total collapse, urging the country's fractious politicians to form a new government to save it from economic and financial disaster.

Jean-Yves Le Drian said such a collapse would spell disaster not only for the Lebanese people, but also for the hundreds of thousands of Syrian and Palestinian refugees it hosts, as well as the entire region.

He spoke to reporters in Paris, months after French President Emanuel Macron proposed a road map to break Lebanon’s political stalemate over the formation of a new government. Lebanese Prime Minister Hassan Diab's government resigned days after the massive explosion at Beirut port in August.

Macron has been pressing Lebanese politicians to form a Cabinet made up of non-partisan specialists that can work on urgent reforms to extract Lebanon from a financial crisis worsened by the Aug. 4 explosion. Macron has traveled twice to Beirut since then and has made it a personal mission to try to repair the damaged country.

Those efforts have led to nowhere as Lebanon's famously corrupt politicians continue to bicker about the shape and size of a new Cabinet while the country is mired in the worst economic crisis in its modern history — a situation has been exacerbated by pandemic restrictions.

Despite promises last year, “it’s been seven months, and nothing has budged,” Le Drian said Thursday. “It’s not yet too late, but we are running out of time before total collapse.”

“There is still time to act but we have to do it fast because tomorrow it will be too late,” Le Drian said.

Speaking at his side, the foreign ministers of Egypt and Jordan also urged Lebanon to form a new government as soon as possible.

On Thursday, outgoing Lebanese Electricity Minister Raymond Ghajar warned that Lebanon may be plunged into total darkness by the end of the month as government coffers run dry. He warned lack of fuel could have “catastrophic consequences," particularly on the health sector and Lebanon's ability to store coronavirus vaccines.

The country's electricity company and operators of generators have been rationing power since last year amid dwindling foreign reserves and government revenues.

Ghajar called for financial assistance to the national electricity company. Lebanon has for decades struggled with power cuts, with the company racking up a deficit of nearly $2 billion a year.

The country relies on fuel shipped in and imported diesel, and government officials have been marred in corrupt fuel deals. Reform of the electricity sector has been a major international demand.