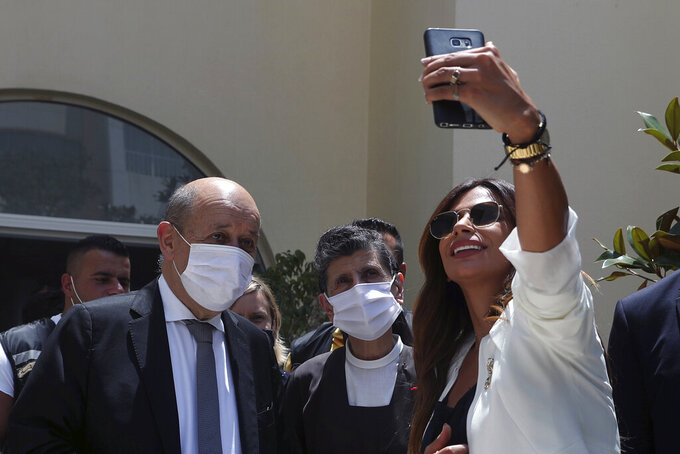 Jean-Yves Le Drian said France will not let the “Lebanese youth alone” face the crisis that has hit the education sector hard. Schools have let some teachers and administrators go and many face the risk of closure. Many parents, struggling to pay private school fees, have enrolled their children in already overcrowded public schools.

The French assistance will go to a network of over 50 French and Francophone schools.

The economic crisis has impacted almost all facets of life in Lebanon, a small Mediterranean country long considered a middle-income state. Since last year, unemployment has risen and poverty deepened, as foreign currency dried up and the national currency lost more than 80% of its value against the dollar.

Le Drian, who arrived here late Wednesday, urged Lebanese officials to go through with an audit of the country's central bank, reform a bloated and highly indebted electricity sector and maintain an independent judiciary.

France is the former colonial power in Lebanon and has previously organized conferences that pledged assistance to Lebanon but demanded reforms to the public sector and governance. Le Drian said France has already donated €50 million ($58 million), primarily to the health care sector to deal with the coronavirus challenge.

“Lebanon is on the verge of the abyss. But there are ways on the table to fix this,” he said during a visit Friday to a school in Mechref district, south of the capital, Beirut.

On Thursday, Le Drian said the only way out of the financial and economic crisis is for Lebanon to secure a program with the International Monetary Fund. France and its allies would then be able to secure assistance to Lebanon, he said.

Talks with the IMF have been bogged down in internal political disputes and struggles over who is to blame for banking losses.

Lebanon is facing a new surge in coronavirus cases, recently recording three-digit numbers of cases a day — a spike from before it eased restrictions in July. So far, Lebanon has reported more than 3,200 cases, including 43 deaths from the virus.

During lunch with Le Drian on Thursday, Hadi Al-Hashem, a Foreign Ministry official, got the news that he had tested positive for the virus. Al-Hashem told Lebanon's Al-Jadeed TV that he has no symptoms.

But his test result prompted Lebanese Foreign Minister Nassif Hitti and other officials to get tested, and they were negative, the report said.

A French diplomat at the embassy in Beirut said the French delegation took all precautions and respected social distancing during meetings. The diplomat spoke on condition of anonymity as he wasn't authorized to talk to reporters.