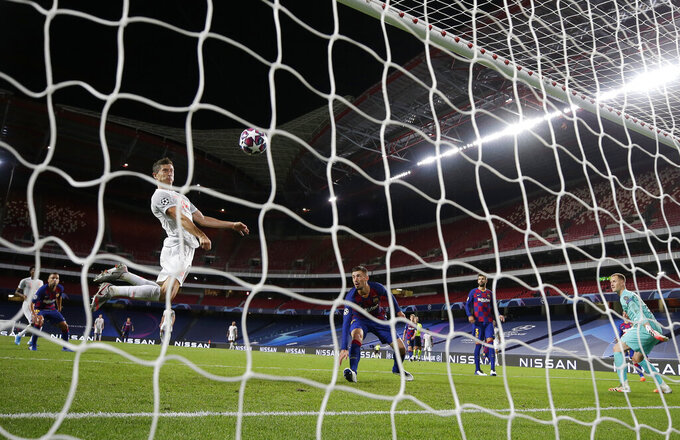 “In Brussels, as on the pitches," the French president tweeted. "France and Germany, engines of Europe!”

The most powerful voices in European Union decision-making. And the last countries standing in the continent's premier football competition, too.

It has never happened before: two French teams in the Champions League semifinals after two nights of incredible results in Lisbon. It is only the second time — after 1991 — since the European Cup was first handed out in 1955 that no teams from England, Italy or Spain made it to the last four.

Lionel Messi and Barcelona were sent packing after an 8-2 demolition by Bayern Munich on Friday. Then Lyon, the lowest-ranked quarterfinalist, on Saturday knocked out Manchester City, the world's most expensively assembled squad.

Standing in the way of a first European Cup final for Lyon, which finished seventh in the pandemic-curtailed French league, is five-time champion Bayern on Wednesday. The previous night will see Paris Saint-Germain, which ended Atalanta's fairytale run, facing knockout stage debutant Leipzig, which was only founded 11 years ago.

You have to go back even longer to find a Champions League semifinals that didn't feature Messi or Cristiano Ronaldo. It hasn't happened since 2005.

Ronaldo, a Champions League winner with Manchester United and Real Madrid, didn't even make it to this Portuguese city where his career was launched at Sporting. Juventus was eliminated in the last 16 by a Lyon side that confounded its domestic form to edge past the side that has won nine Italian titles in a row.

It signals a resurgence for Lyon, which swept seven French titles from 2002 to 2008 before the rise of PSG, with more than $1 billion of Qatar-funded player spending since 2011, transforming the dynamics of Ligue 1. Seven of the last eight domestic titles have been won by PSG.

But Kylian Mbappé is delighted by Lyon muscling into the elite, allowing the PSG forward to use it to shoot down jibes about the quality and status of Ligue 1.

“FARMERS LEAGUE," Mbappé tweeted in all caps alongside emojis of a clown face and applause, tagging in Lyon’s Twitter account after the 3-1 victory over City.

With Pep Guardiola — twice a Champions League winner as Barcelona coach — outwitted by Lyon's Rudi Garcia, the last of the managerial heavyweights exited this mini-tournament.

Diego Simeone, who has lost two Champions League finals with Atletico Madrid, was dumped out by Leipzig on Wednesday. The last 16 saw Julian Nagelsmann mastermind Leipzig's victory over Jose Mourinho's Tottenham, the 2019 finalist. The same stage saw Jürgen Klopp's title defense ended at Atletico. Zinedine Zidane's hopes of a fourth title were thwarted by Guardiola's City in the last 16.

So a manager is guaranteed to lift the European Cup for the first time next Sunday. And in a rarity for football, the coaches in the semifinals are all natives of the countries represented by the remaining teams.

“It’s clear that this is lovely for German football,” Nagelsmann said. “Coaching education in Germany is good. I enjoyed a good apprenticeship as a trainer and was satisfied with what I picked up along the way."

Nagelsmann picked up his early coaching tips from Tuchel, who he worked under at Augsburg before leading Hoffenheim into the Champions League for the first time.

“I always look back to words that said German football would be left behind on the international stage because we mainly had German coaches,” Nagelsmann said. “And now everything is great. Of course, that’s not the case either. But we shouldn’t live in extremes."

At 33, Nagelsmann would be the youngest manager to ever win the biggest prize in club football.

“One German coach will definitely be in the final,” he said. "That is certain."

It has been a shared journey for Leipzig and Lyon. They took the two qualification spots from the same four-team group after being the lowest ranked teams, below Zenit St. Petersburg and Benfica, whose stadium will host the final.

It should have been staged in Istanbul and in May. It’s not just the dates and location that were hastily changed. So was the format, transforming the dynamic of the competition.

The quarterfinals and semifinals are being condensed into 10 days in neutral Lisbon, rather than being spread over two months with home-and-away fixtures, to ensure the competition can be completed during the pandemic.

The disruption to football caused by the coronavirus has favored France and Germany. The English, Italian and Spanish leagues could only resume in June, so only completed their domestic fixtures in late July or early August.

No wonder the French and German team players were so much fresher heading into this final eight tournament.

The Bundesliga was completed in late June. Ligue 1 was curtailed after playing its last fixtures in March as COVID-19 forced Europe into lockdown. The only competitive French fixtures since then were the two finals in July, and Lyon taking PSG to penalties in the League Cup before losing.

“The head guides the legs — this did not preventing some of my players being exhausted," Garcia said after Lyon ousted City. "But usually we recover better when we have won, and this was a great victory for us and for French football.”